I’ve barely played around with photo engravings since I’ve had the Glowforge but I thought I might give it a go with the engrave options rolling out.

I didn’t want to burn wood just for the sake of burning wood. I’d rather have a piece that could sit on the desk. Or maybe on a ledge. Or something. I referenced a location in a previous post, “An Open Letter To Glowforge.” That’s where all of this puzzle business got started, so I figured it would be appropriate homage to have sitting around the office.

An Open Letter to Glowforge

I was on a rocky outcrop overlooking Swiftcurrent Falls in the Many Glacier region of Glacier National Park.

Here’s that rocky outcrop where ideas are born.

Source file, modified in Silver Efex Pro (A Nik Effects Lightroom Plugin). This is a scary thing to do to an image but it is what it is. The Silver Efex Pro has some great black and white options inside of the program - the two that I think really help for preparing for a laser are the Structure settings and Soft Contrast settings. I don’t even really know how to describe Soft Contrast in the plugin - it’s way different than just setting a contrast slider, and while I’ve gone to the more extreme side with this image, it’s pretty awesome for just regular photography. 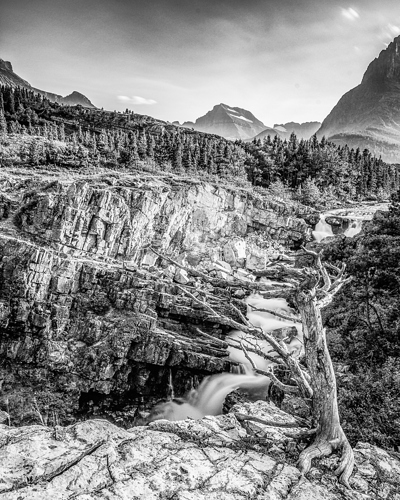 This is straight out of the laser using 2 passes of SD Photo on med. maple ply: 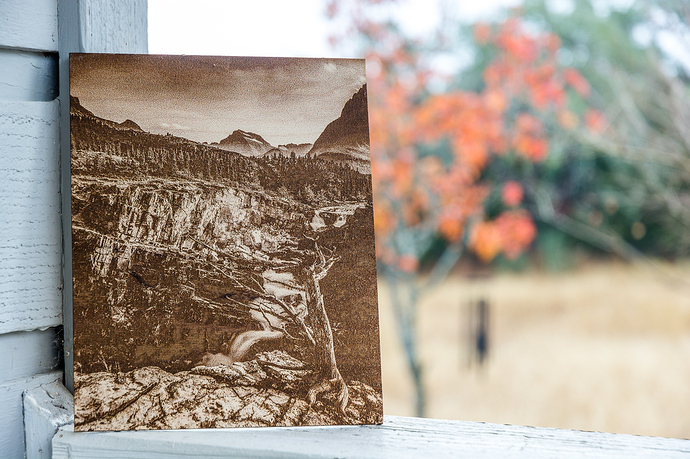 This is cleaned and brushed with denatured alcohol. 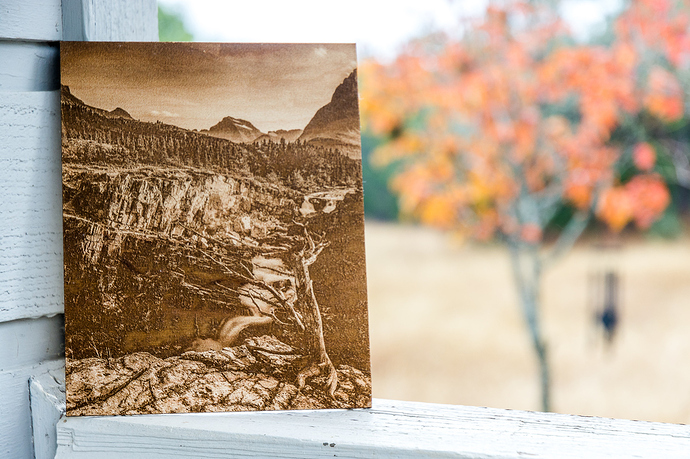 I prefer the uncleaned version as far as the overall coloring… it has less of an orange-cast (these are pretty balanced as far as white balance, exposure, etc.). But, once cleaned, the piece has a greater depth to it that shows the fine details better.

Thanks for sharing your editing techniques, as well as the before and after cleaning pictures. They both look stunning!

Awesome as always JB. (Really turned out nicely with the new engrave settings too - you can see the twigs on the dead tree!)

Gees…that looks amazing! I’m really looking forward to trying this newest batch of settings. Your photography is stunning in of itself…and now this new dimension.

I very much enjoy your amazing photography. Seeing it looking great in wood is just the icing on the cake!

I love Silver Efex Pro… nothin scary about it! I’m glad DxO bought the rights to the Nik plugins and incorporated them into their software.

Nah - the plugin isn’t scary… but doing that to an image is a little scary (because it’s so far out of the norms of how you’d typically edit an image).

I hadn’t heard about the DxO purchase. Just googled it. Very cool! I’ll be interested to see what they come up with for their next version, though I’m sure they’ll be charging a pretty penny for it.

The original photo is stunning, and the resulting engrave is beautiful as well. I see what you’re saying about the coloring on the uncleaned version, but I rather like the orange tone of the cleaned version. It’s almost like a sepia effect.

Any thoughts on why you used two passes of SD rather than something like one pass of HD? Still trying to figure out photo settings.

Just playing things by ear. I saw what Pass 1 looked like and decided to give another Pass.

The difficulty with engraving these photos is two-fold (at least). First, Glowforge wants to provide Automagic settings, which is great! And gives people a place to start, which is even greater. But, people have different tastes in how they like a picture to look - everyone is different. I like a little stronger contrast, so the second pass was just right.

The second factor is file prep. I could have maybe done something more in preparing the file to get a bit stronger of an engrave with the first pass? Not sure

Here is the middle of Pass 2, which helps show the difference. 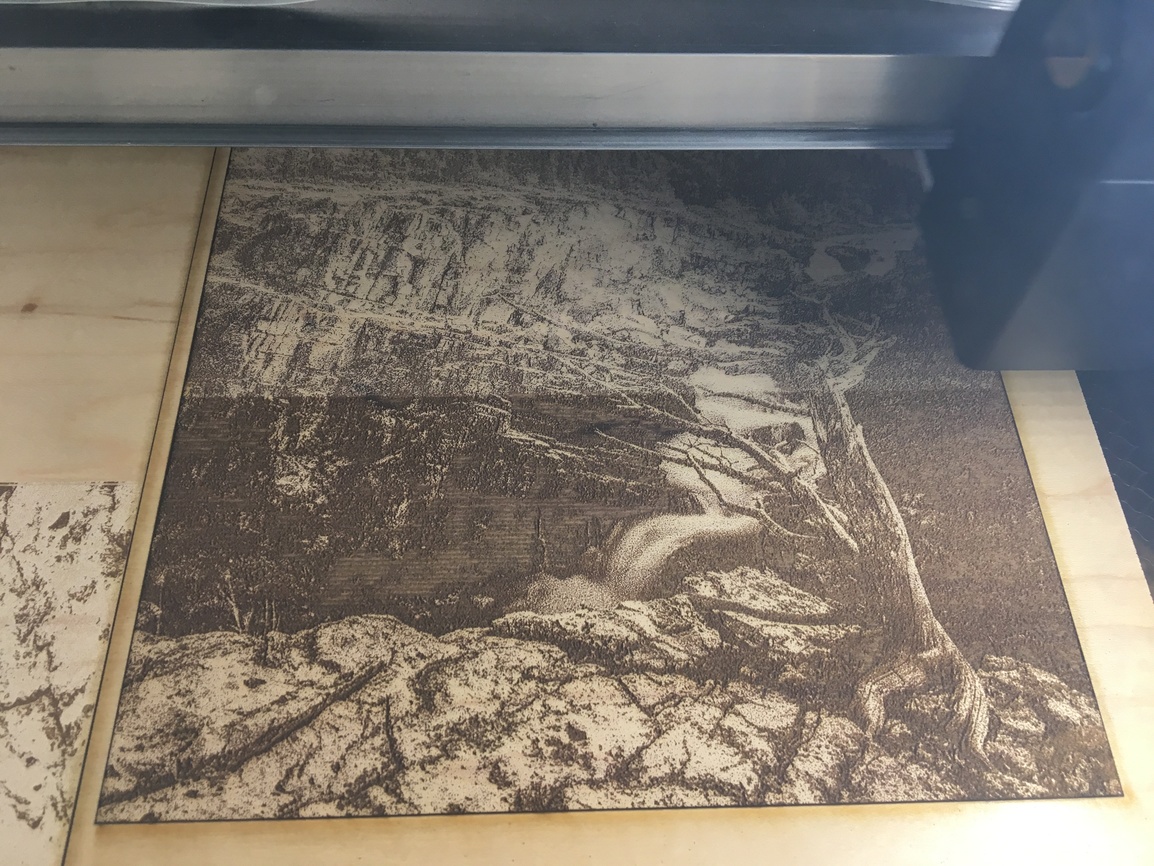 Wonderful picture! (And my usual hobbyhorse: char is what gives you color differences when you engrave wood. Feature not bug.)