Can the air filter be positioned on its side or must it be wheels down?

Out of curiosity, what makes you say that?

I have one sitting here?

(Sorry, that just struck me as funny for some reason.)

There’s a switch on the back, a knob on the front and fins on each side for air exhaust, which can’t be blocked.

Sorry, I knew you had one. I meant was there some specific documentation that said you can’t locate it. The vents make sense but if you had something to keep the cord from being damaged or retain access to the knob, you could have it on its side otherwise. I don’t have one but that’s my guess.

It would depend why they want to put it on its side.

The manual I see just says make sure to have 2" of space at the vents but not much else.

Maybe if you suspended it in a frame of some sort it would still work, but I’d be scared to be the one to test it.

If you used the GF to cut a supporting structure, the filter would be full before you got to mount it, so… ?

The table that the GF sits on has a shelf underneath it but the filter is too tall to stand up. So I thought if I could l could lie it on its side it would fit. If it must stand up it’s okay.

Following, and I got on here to ask the same question…My new GF is on a coutertop in my room (think science lab counters)…and it’s LOUD. Annoyingly louder than I/we expected. I’d like to run it into the bottom of the cabinets. It’s on an end, so I could paddle bit-drill a bunch of holes that no one would ever see so the air has plenty of room to escape. If I mount it on its side, dial facing out, there would be no issue with the power cord. Air is air, and I can’t see gravity being an issue…how do we get an official response from GF on this…? 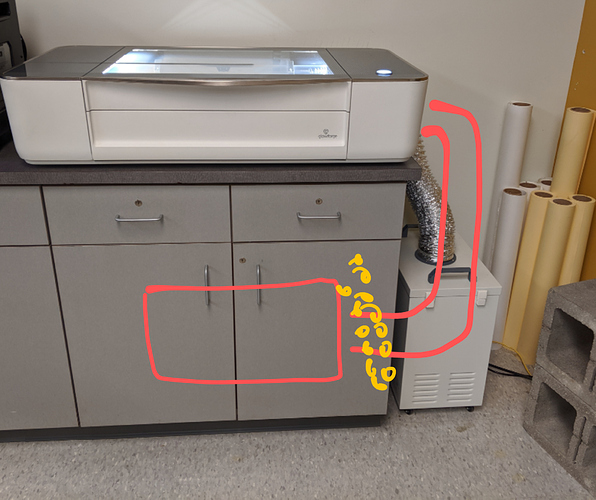 Air is air, and I can’t see gravity being an issue…how do we get an official response from GF on this…?

Chuckle! We won’t. If you want to try experimenting with it, have at it, but I can pretty much guarantee they are not going to recommend that you run the filter on it’s side. (If you do test it out, do let people know if it works. You can turn it on it’s side and run it right now…no need to wait until you put it in a cabinet. Just keep in mind…if you break it, I’m not sure that using the filter other than as it is designed to be used is covered under the warranty.)

Since I’m allowed to give suggestions by virtue of the fact that I do not work for Glowforge…
I would suggest removing any shelves in the cabinet, removing the wheels from the bottom of the filter, and standing it upright in the cabinet. (With plenty of air holes drilled for air circulation of course, and a big one cut in the side to run the hose through.)

Or…and this is the method I use…inexpensive noise cancelling headphones/earbuds.

Don’t forget that you need a way for the air coming from the filter to escape.

Thanks for asking! We’ve never tested it, so we don’t know if it would affect the filter cartridge’s efficiency or lifespan. I’m going to move the thread to Beyond the Manual for further discussion, since other people might have information on this.

Baffled Air Inlet Box to Dampen Sound Everything Else

The more I think about this the more I thinkt orientation shouldn’t matter. The air flow is entering at the same place and the air will flow over the filter media and exit the filter in the same place. I know that I can’t obstruct the switches and air exit louvers so it all of those things are taken into consideration I really don’t see a problem if the filter is on its side.

In general, this would seem to be true from an airflow perspective, but there are components that might not be designed for it. The first I can think of would be bearings on the fan that would wear prematurely if operating in a different orientation.

It’s probably not an issue, but “probably” doesn’t help with warranty claims down the road.