Airbrushed a piece of clear acrylic with matte black and then etched an image on HD settings. It was just something I hadn’t tried yet so was curious about the result. I was concerned the paint would burn and not be a fine etch, but overall happy I’m happy with the result. 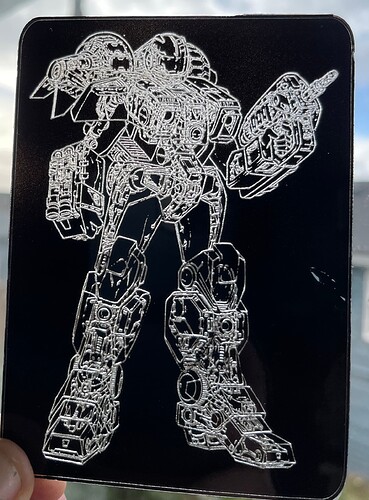 Nice results, please share once you spray to reverse and add LEDs

That is very avant-garde. Is that one of those transformer machines? I love your creativity

Brilliant so far! Looking forward to the final result!

Painting the other side…that will be interesting to see. You are off to a good start!

That came out great!

Are you going to seal it? I do feel like the paint would scratch very easily.

What a neat technique! Can’t wait to see it lit up in a dark room (hint, hint)

Or is tha from pacific rim movies? Looks great

@JimmyWayneWestie @djfb
I happened to hover over the image and saw it said robotech. 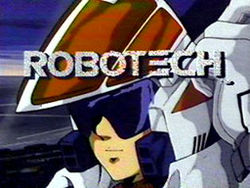 Robotech is a science fiction franchise that began with an 85-episode anime television series produced by Harmony Gold USA in association with Tatsunoko Production and first released in the United States in 1985. The show was adapted from three original and distinct, though visually similar, Japanese anime television series (Super Dimension Fortress Macross, Super Dimension Cavalry Southern Cross and Genesis Climber MOSPEADA) to make a series suitable for syndication. In the series, Robotechnol...

P.S. I know, I should have played it off like I knew all along…

ROTFLMAO!!! I would have believed you knew.

LOLOL I was going to ask my son and husband but then I saw that name on there.
Given that info, I don’t think they would have known the correct answer.