So, at this point it’s a waiting game?

I would stop waiting at this point. The alignment is probably as good as it’s ever going to get with the hardware we have. Some people believe there are mysterious software updates that make the alignment better or worse at random times, but I see no evidence to support that. I think it’s just coincidence. The tolerances of the lid fitment alone make it seem pretty unlikely unless we had the ability to run a recalibration on our own machines once they’ve settled into place.

Regardless of what the future brings, you should make your peace with the Glowforge as it currently operates. The company says anything up to 0.25 inches is acceptable. If your machine is significantly worse than that, they might replace it for you. Otherwise, find a way to work around the visual alignment system by making jigs or running low power test marks or whatever you have to do. If you get your hopes up thinking every day that maybe tomorrow it will work like the ones in the commercials, you’re just adding stress to your life. If it does magically start working as advertised some day, that’s just a bonus.

find a way to work around the visual alignment system

So, what you are saying is, in my opinion, “make peace with getting screwed” because the banner feature which distinguishes this device (we waited two years for) from something 1/4 the price doesn’t work and never will.

maybe tomorrow it will work like the ones in the commercials

I realize you are saying “just try to be happy” and I respect that opinion, but I disagree. I think we need to hold Glowforge to the standards they say they hold themselves. If we don’t advocate for ourselves and future customers, who will?

This is exactly what I think should happen. It just doesn’t seem to be too hard of an engineering challenge, if each of us was given a calibration object of precise thickness – maybe multiple of varying thickness – with a precise known pattern printed on it. The GF software could use the picture of the object(s) to reverse the fish eye and perfect the alignment. I don’t understand why there isn’t a calibration grid printed on he floor under the crumb tray

If that can’t do it, then new hardware needs to be added – a depth sensor to the modular print head, a better camera to the lid. Whatever it takes to satisfy what was promised.

GF staff does get on the forums every few months to talk about coming improvements, as recently as a few days ago, but a sense of urgency have never really been expressed. IMO the status of the coming improvement (if it exists) should be added to Dan’s monthly message, replacing “when are we going to ship to our backers” as the top issue.

The glass top on my glowforge has gotten increasingly warped over time, though only slightly worse. The fact that it continually changes makes calibrating it through a software fix a constant thing which kind of sucks. This statement below in the April update makes me wonder if glowforge is trying to adjust this in manufacturing.

“We’re changing the glass designs in the next few weeks. It’s a purely cosmetic change, but we don’t plan to ever make units with the original glass again - meaning your first edition Glowforge will forever be an original collector’s item. We wanted you to be the first to know.”

It also makes me want a new top without the warping so that my glowforge could function with alignment.

Sorry, I meant improve on his machine by itself - understand we’re expecting improvements from the mothership…

It also makes me want a new top without the warping so that my glowforge could function with alignment.

Pure speculation on my part - I suspect that the new glass design is not related to a warping problem, but to allow for better adhesion of the glue used to mount the brackets to the glass. There have a been a fair number of posts to P&S with pictures showing the failure of that bond where it appeared that the failure was with the paint.

The warping appears to be more related to flexing of the plastic housing, and not due to any flex in the rather rigid glass. It may be beneficial to use shims under the feet of the GF to correct for that if it is becoming a noticeable problem for you.

I would suggest that you look at the surface that the Glowforge is resting on. It is very unlikely that the glass is warping.

I found that the table my Glowforge began to sag (started using the drawers hanging from the underside of the tabletop). That caused the case to flex/twist and I noticed the front corners corners of the lid not to be flush.

Once I put some square 1/8" walled tubing down the length of the rubber feet, the lid aligned perfectly. Since the square tubing could span the sag points, it brought the Glowforge feet contact point back into the same flat plane. 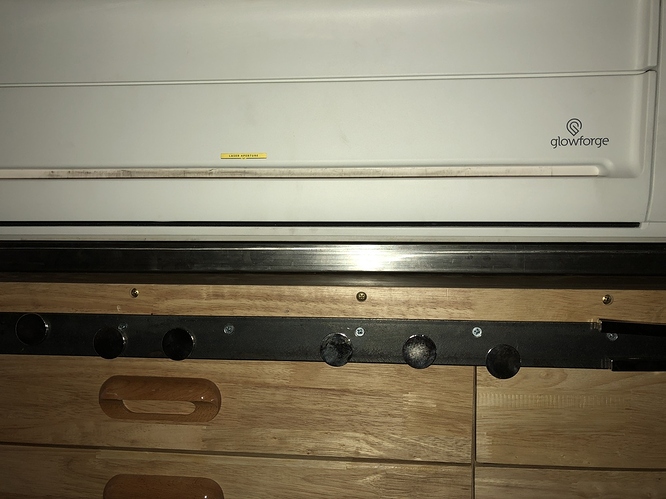 As you can see, even after I reinforced the table top, I still have a gap between the table top and the square tubing.

At one point in time, one of the front corners of the lid was nearly an 1/8" out of alignment. I thought the glass had warped, but testing with a 24" perfectly straight edged ruler showed the lid to be flat. When I checked the table top, what a shock that I found on the sag.

Whether you’re happy or not, what I’m saying to people asking this question is not to hold their breath waiting for better alignment. And to us answering these questions, not to say things like “It will get better eventually”, because that’s confusing and potentially counterfactual. I didn’t say anything at all about whether you should continue complaining to Glowforge about it.

You are right. I was not trying to put words in your mouth, only expressing what conclusions your (probably correct) statements lead me to. Honestly, I didn’t realize how disappointed I was in Glowforge about this issue until I started “talking” about it here and then came upon their new commercial showing it working perfectly this morning. That disappointment is coming through more than I intended.

I agree with @chris1… It’s best we make our peace with how it is now. At the same time I encourage frequent and vigorous feedback to the company, because the squeaky wheel gets the grease.

I am worried that, as Chris said, there is only so much they can do with the hardware we have. With some sort of manual calibration I am sure we could get very good results, even if calibration is a regular chore. But I worry that the company’s design philosophy may prevent them from offering any feature that is so un-Apple-like.

Their focus on ease of use has paid some huge dividends so far… I just hope they will find some room to compromise when it counts.

@Dan has said repeatedly (recently) that they are still working on improving it, and I choose to believe him. (Besides, I’ve seen how good it will be, so that does help a great deal.)

I’m not so pessimistic. All my machines have had extreme repeatability. There are alignment errors but they never ever change. Pretty easy to implement a user assisted alignment tweak. Might take forever for the company to get around to it. There are other methods using the head camera but no matter how, I’m betting it will happen eventually. Thinking about 0.05" is possible.

When I say easy, I mean technically easy, not any relationship to how hard it is to do in S/W.

Thanks for letting us know about this.

Like others have said, the software on your Glowforge is responsible for ensuring that the print lands on the material in the same place as the preview. When you’re done with a print, let a new image load. If the print appears on screen far from where it was supposed to go, you may have an alignment problem.

Most alignment problems come from the material being closer or farther from the camera than expected. While we are working on software improvements, you can take these steps for the most accurate alignment results:

I’m going to close this topic. If you find that you have an alignment error of more than 1/4" after completing the steps listed above, please contact us again so we can investigate.