All Out of Ideas

Sounds like a a-hole that you don’t need to be living next to.

I have a strong dislike for dogs, so I will let someone else have mine.

My ex and I moved into an apartment shortly before my daughter was born - we were living with her mom but she was a smoker. Anyway, there was a real b!tch living in that community and she constantly parked her car in the space with a ramp meant for access to the apartments - not a parking space. This was in the 90’s. I copied the letterhead from the complex and faked a letter to stick on her car saying it would be towed if she parked in that spot again. She never did.

My house has doubled in value since I bought it in 2016 and I get letters asking to buy it. Housing market is nuts.

It doesn’t sound like you have many realistic options other than moving. Real estate here was super insane right up until the interest rate hikes started to be felt in mid or late June. Suddenly, houses have dropped asking prices by six figures and you no longer need to make an over-asking non-contingent offer to buy something. Six months ago, houses in my neighborhood consistently sold before officially going on market. Now they’re sitting for a week or two before selling. Balance is returning to the real estate market.

I just hopped back in myself after holding off for the past year and a half. I’m looking for a place without an HOA this time around. I literally want the same size house in the same city, just without an HOA or similar restrictive covenants. Neighbor drama, and neighbors having a say over my living space, are exactly why. Also the reason I subscribed to the HOA subreddits. If you are going to mortgage a place, the sooner probably the better, as the Fed keeps indicating that they plan to continue raising interest rates for a long time. I set up a bunch of fine-grained Zillow searches with instant alerts enabled so that if something appealing that I can afford shows up for sale, I can act on it quickly.

I think the only option I have right now is to sell and rent for a year with the hope that the prices drop to something I can afford, or my work gives me a raise. I can probably get about 230K for my condo, clear about 80K less capital gains, and use that to clear my remaining debt. That would mean if the prices drop 20% like I expect they will in the next year, I can have a small down payment or a little cash to do any remodel on a new place, and being debt free will help with the mortgage on a new place.

If something slips and the AC unit issue goes away I can just sit here and ignore the neighbors until I have a better financial situation. Which is what my plan was. This is just forcing my hand.

Oh my, move, definitely move! Why would you constantly want to be around ALL of that?

You don’t suffer the capital gains if you sell then buy another home as your primary residence within a year in CA. (Is that a thing in other states?)

Moving sucks. LOL. The reason I can live here is that until the AC noise issue started I can just ignore everyone else. I only have to deal with the HOA nasty woman at meetings once a month. The rest of them I just do my best to avoid.

But yes, if I can’t figure out a path that solves the AC noise, moving will be my only path.

I will look into the primary residence exclusion in more detail.

I have a strong dislike for dogs,

How about a nice loud cockatoo?

Or a recording of a cockatoo that you can play at very high volume when you leave the house?

Oh, yeah, that would be a much less messy alternative.

I don’t think this would work well, unfortunately. High pitch doesn’t carry through our building. It’s actually fairly well insulated and constructed. I can’t hear my neighbors at all 98% of the time.

I briefly went down a rabbit hole of whether anyone makes a product that can attach to a wall to sense the low frequency vibrations and play audio that would partially cancel it out. I found only research papers saying it’s possible with a ~12 dB deadening, but no products, except… 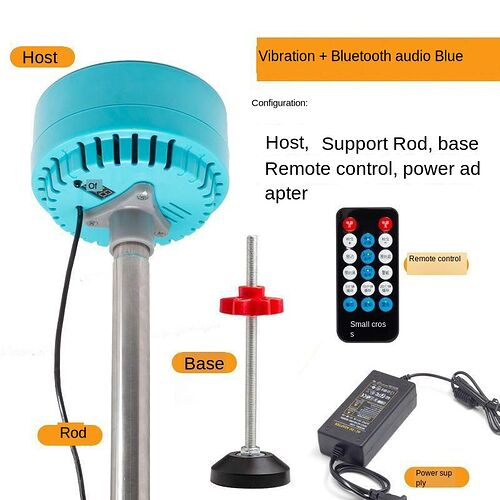 Which I think is a “the best defense is an offense” product. Despite being titled as “decrease/deaden/muffle noise”, the actual pictures and functions are about “counterattack neighbor”. A purpose-built neighbor-vibrator.

Hmmm…can you legally ignore your HOA? Hmmm…no lawyer will take the car? Odd… maybe take him to small claims court. Don’t need a lawyer and you have all the facts and data to convince a judge.

You can ignore the HOA if the HOA doesn’t actually take any enforcement action. They so far refuse to act as they don’t think they have a case. I can’t show a judge that I am damaged by this noise. I can show it exists and I can say it is irritating, but I don’t any data showing it has any effect on me other than my word it’s irritating.

I haven’t been using my sleep tracker long enough to show that the severe drop in sleep quality isn’t seasonable.

I don’t have any financial damages to claim.

Not sure on what basis I would take him to court.

There’s a solution for that, summed up nicely here:

Available as a print!

Sorry to hear you are going through this, I am sure you have thought of this but is there any way you can cancel it out with another noise with the same mechanism that noise cancelling earphones do?

I also wanted to suggest renting yours out and then renting elsewhere for a while, or sabotage…

Another idea - ask the neighbour if you can install noise cancelling foam on the inside of his attic… the noise might be bouncing around in there and if were able to do this it could potentially absorb and kill the sound, keeping it in the room, or if not it might change it to a different frequency that is not a problem, or that others will then begin to hear, therefore adding more weight to the asks to get it resolved.

In order to cancel it I would have to get an isolated source signal, which would mean getting a sensor on the unit. Because the noise is caused by vibration, I would have to counter it with an equal vibration at 180 degrees phase. This means some type of weight spinning at about 1000 RPM with a feedback system to turn it off when needed.

I could potentially set up a PID system to reverse match the required phase, but that would take a lot of engineering and testing. Plus it would have to be hard mounted into the building frame and there aren’t a lot of places to do that.

All the sound engineers at work cringe when I describe the situation and have run out of ideas because of the energy involved and the signal challenges. These are the engineers who programmed the active noise cancelling used in the high-end Samsung earbuds, so they are pretty familiar with the science behind it.

I have wanted to move for a while due to several unrelated conditions, but this is just pushing my timeframe forward. I can’t rent it because I need the cash from the sale to get into a new house. Right now I am looking at needing about 7K cash needed to start renting in my area.

So I am going to start packing and do a few small improvements and get it on the market. Then live with my girlfriend for a couple of weeks while the sale gets finalized and then rent for a year and figure out where I want to be and what the market is going to do.

Sabotage is tempting though. It would be hard to cover the tracks, or I might have already tried something!

I knew you would have already explored this, I’m sorry it’s not an option. It sounds like you have a solid plan, it would be great if you didn’t have to sell to fund renting, that is such a bummer. As soon as you get away from the resonance though you will be much happier…

Good idea, but the noise is from vibration, not sound, so foam doesn’t help. The air handler fan is vibrating and transmitting that vibration into the building frame. The drywall then turns into a speaker of sorts to create the noise in my unit.

Also it would require the neighbor actually respond to communication, which is not going to happen. I was hoping the city code would give me the weight to make him work with me, but since they have declined to assist and the HOA has declined to enforce the CC&Rs, my only two alternatives are court or moving. Being as the HOA and City have both said they don’t care, convincing a judge without some pretty solid evidence of health impacts or financial damages is going to be really hard. I might get the health impacts next week at the audiologist but I think that is pretty slim too.

I think it’s just time to move on.