All things Affinity 2.0 has dropped

All things Affinity 2.0 has dropped, and as usual, when they do something like this, there is a big sale. 40% off for the intro. 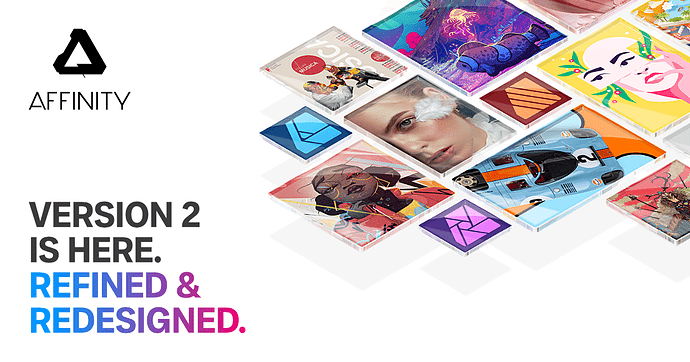 From the smoothest photo editing and design software to next-gen page layout, Affinity is pushing the boundaries of what’s possible with creative technology.

It took a while to read that properly. I even started to get very interested till I realized that Android was one of the things dropped. I am working from my tablet presently and a good vector app would be worth it.

If it was an upgrade to V1 I’d keep using it, but I don’t really need it.

I’ll look again whenever I decide Adobe gets too expensive.

Plus you can get the whole suite of three apps via a universal license for just $99!

The warp mesh feature is a welcome addition. Being able to make a global organic change to a collection of curves should prove helpful.

Shape Builder is also very promising in speeding up ideation. A number of things I’ve seen demo’d across other videos would otherwise have taken a LOT more clicks… clean Celtic knots being one of them.

Went with their $99 Universal license to spread all 3 products over 2 PCs, 2 MacBooks, and two iPads. Even with their piecemeal pricing being on sale, I think I made out like a bandit with Universal.

I have been using v1 for a while and decided to buy in to v2. The Affinity suite is not perfect, but it’s pretty good, and the price is right. My $99 universal license is probably going to get me 4-5 years of updates across 3 apps on 3 platforms.

I would recommend that anyone who is interested check out the trial. It does not have every feature from every app you have ever loved, so if you don’t want to get burned, a thorough trial run is important.

For example, it was only a year or so back that Affinity Designer got an Offset Path tool, which is absolutely critical for some kinds of laser projects. Mesh perspective warping, which is pretty basic, is new to v2. They just dodged that feature for years in v1. And there is still no autotrace at all.

But, each app also has really great stuff too.

Now that they are not splitting their time between v1 and v2, hopefully v2 gets features and fixes more often than v1 did lately.

Yeah, I hate it when a company covers several os but there is no love for android.

I was pleased to see they added support for DXF files. I installed the 30-day trial and tested that out some last night. So far seems to work very nicely.

On the official forums, opinion is kind of split between resigned “nice update I guess” and hyperbolic “Serif is literally Hitler.”

Auto trace would have been a game-changer for me, but without that…and little else that appeals to me…or that I would use, I’m going to continue using version 1.

The lack of auto-trace was surprising, that’s for darn sure!

While I bought in the truth is I could have made do with v1. I hope we get a lot of feature updates…

When AD first became available and when I decided to look for something else besides Inkscape, after I’d learned a little, I wrote to the developers at Serif and asked about auto trace. They said they were working on it and that it would be available fairly soon. Well, a hopper is a hopper and we all know how that goes. Here it is 5 years later and nada.

So, here’s the thing, I love AD 2.0 for some of its tools, but I know I will continue to use Inkscape a lot for the import/export capabilities and the custom palettes. I don’t need to trace all that often, but it is still a disappointment that it isn’t in AD2.0

LOL, there are always a few.

I downloaded the iPad version on Friday. They got rid of the trash can!! Now if you want to delete —you have to do a long press on your canvas.

I noticed the trash can missing but didn’t think to try a long press. I tried it, and nothing. The only way I’ve been able to delete in AD2 for iPad is to cut.

Have your item selected. Put your finger anywhere on the screen—-Count for one second and pull your finger away from the screen – this box should appear.

This technique does not work with the Apple Pencil.

I have never protested for anything in my life— I went straight to the developers and told them the trashcan is needed. 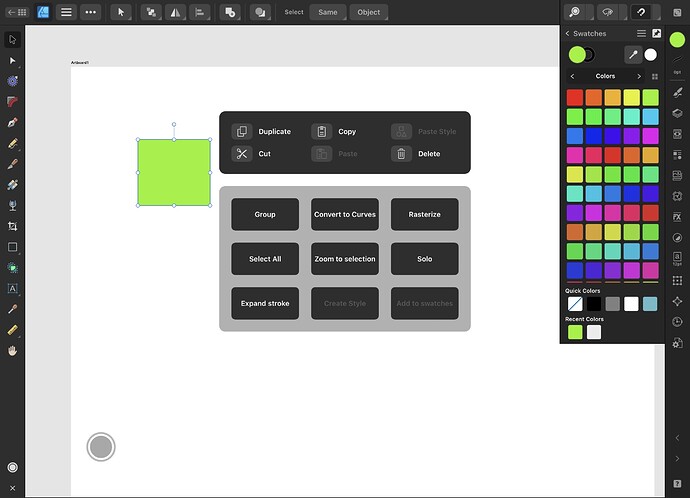 Thanks! And yes, they need the trashcan back.

que the song “I shot the Serif”

I am still wondering if the things Affinity dropped broke.

que the song “I shot the Serif”

So you left the county San Serif?