Hi Everyone! Please enjoy this short descriptive extension of the Alpha Centauri research base on Proxima B…

Doctor Brown, affectionately called “Brownie” by his friends and peers, is Earth’s most successful geologist and was recently offered an opportunity to contribute to the Alpha Centauri research project on Proxima B. Although Brownie has access to the latest and greatest in scanning and rock extraction devices, he insists on keeping the old methods alive. Modern hand-held rock vaporizers are clumsy and lack the finesse necessary to wield a chisel. This does leave him prone to minor hand injuries, which by now have largely calloused him. Unfortunately, a stray shard still finds a way to extract its price, so he needs easy access to an ample stash of band aids. Old cautionary protocols on Earth surrounding nuclear fallout led him to carrying a Geiger counter everywhere he went, which he still steadfastly uses to check every chunk of material that comes through his lab.

While the Geological Society of Earth requires Brownie to log all discoveries in the official computer system (which is currently being used to probe and scan the structure of a core sample), he has made a hobby out of using his vintage DR-410 digital microscope scale, which he’s managed to keep in working condition his entire career, to capture physical Polaroid-style photos of his more notable finds (which he hand-writes the weight on before putting it in his book). He’s just discovered a type of crystal that is oddly reminiscent of Earth’s vivianite, and has already poured himself a celebratory drink. As part of his agreement to relocate to Proxima B, he was granted a supply of Jack Daniels whiskey. Jack Daniels was the only distillery to survive the Great Fall of 2256, and as such, has become Earth’s sole exporter of spirits and libations. While drinking in the lab is generally looked down upon, he was brought on as a private contractor, and as such isn’t subject to the same disciplinary measures…as long as he doesn’t fall in to the waste rock chute, which he never seems to remember to keep closed. 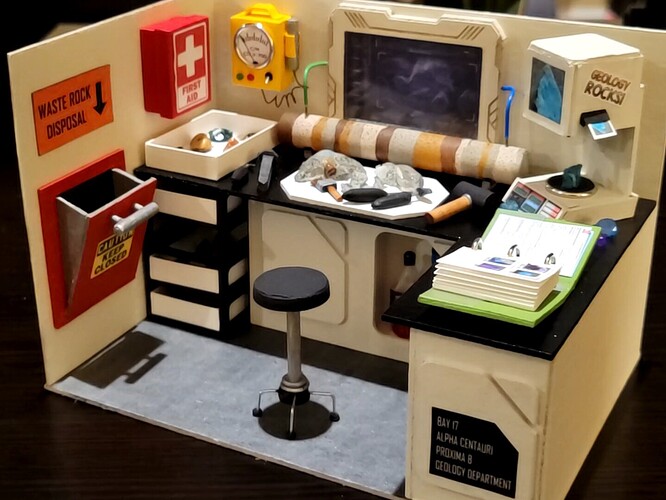 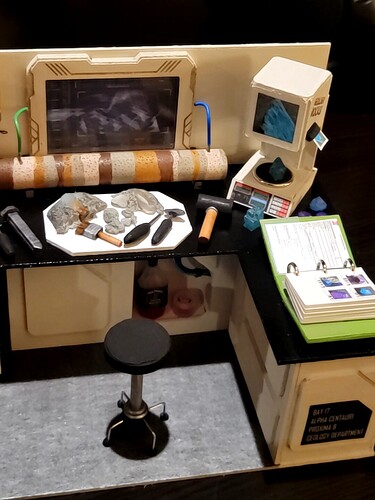 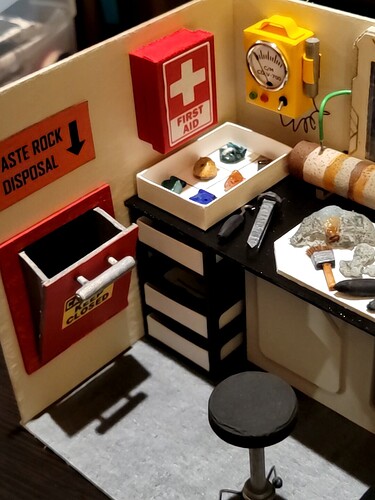 I used the GF to cut the tray rack and counter pieces/accents out of 1/16" chipboard, and engraved/cut the computer screen out of medium PG draftboard and medium clear acrylic. The rest is my standard hodge-podge of whatever I can find around the house (chip board, toothpicks/dowels, paperclips, hot glue, paint/sharpies, some wires, paper/cardstock, etc.) The bottle of Jack is a portion of an eye-drop vial, the core sample is a painted hot glue stick. Both photos on the microscope are zoomed in pictures of the actual crystal that I cut from a chunk of hot glue, and the other photos in the album are actual pictures of the other crystals on the counter. Largely inspired by my late Grandfather, who actually was known as ‘Brownie,’ taught high school Earth Science after he retired from the air force (WWII/Korea), and always had to have his nightly ‘tea,’ which took me far too long to figure out was actually Jack Daniels whiskey.

Hope you enjoyed, thank you for stopping and looking/reading with me, and until next creation (which at this point I have NO idea what it will be), Happy Forging!

These keeps getting boulder, but of quartz, igneous is bliss! Love these!

I giggled as I read this! I absolutely love your stories, and have started bookmarking this new adventure of your labs, just so I can go back and read them without having to search. The details in this one are absolutely fabulous, and I especially love the Polaroid pic and the notebook! Well done (as always)!!

I too love the stories that accompany your projects, and I love miniatures.

Thanks for continuing to entertain and inspire us!

I heard tell the plants there had bloodstreams of pure Ethanol so a Proxima tea leaf is very similar. I could never be a good geologist as I kept taking everything for granite even when it was gneiss.

You transport us with these creations. Fabulous work!

I love all of your attention to detail, plus such a vivid imagination. Lots of fun looking at your creations.

Another amazing creation! What are the dimensions of this lab?

6" x 4" x 4" I usually order the 4x6 packs of chipboard and I don’t have to cut the floor or back wall. I have thought about getting bigger sheets of and going bigger, but these generally turn out feeling about the right size and not flimsy. I’m awaiting an order of draftboard and black and white acrylic (which opaque black and white are ones I’ve never had), so we’ll see what my brain ends up brewing up with those…

Sensational! Now I want a hand-held rock vaporizer. I think it would help bring my flower beds into shape.

That is just terrific!