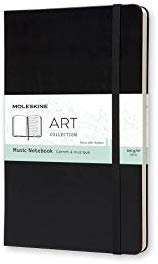 Hi has anybody tried to engrave on a hard cover moleskine , if yes could you show me the final design and share the settings you used?

Do a little more searching before you try it…I seem to recall that Moleskine is not something that is safe to laser. (Might have a vinyl component that contains chlorine.)

The top one was 6x9 I think and the bottom one is their large-size artist pad - 18x12 maybe? 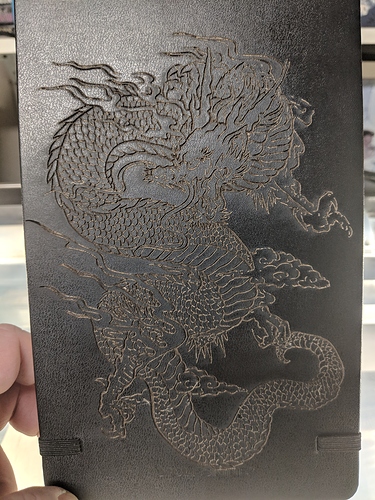 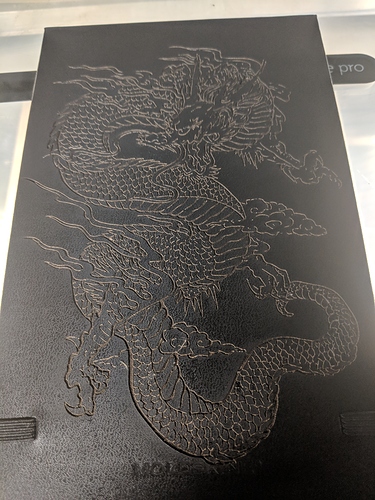 Any idea on what can be considered “new” for this? Or any way to tell based on the actual notebook?

Any idea on what can be considered “new” for this?

They started phasing it out a few years ago. I can’t imagine any current stock still has an issue. Unless I were doing a ton of it I wouldn’t even think to be concerned since I use a huge variety of materials - a production shop trying to do Moleskines 8 hours a day might want to do their best to confirm. But then sacrificing one to the burn test wouldn’t be a super expense.

The one I did the small one was the sacrifice. If I recall it cost about $12 with the big one costing $60 or something.

I tried a fake one.

Hardcover daily planner Beyond the Manual

I picked up three of these from a deal of the day last week on Amazon. $6 a piece. So I thought I would give it a try. [image] [image] [image] I used a png and engraved at 1000/80 270lpi. It looked pretty when I started, but the details peeled off when I tried to clean it. It was my last one, I used up the other two trying to perfect the settings. Next time I will try engraving an acrylic sheet and debossing the cover.

Thanks for posting, i’ve thought of the same thing. Initially I researched to see what Moleskin was made out of; its mainly cotton. Without any added toxins, etc, it seems pretty safe to engrave.

Initially I researched to see what Moleskin was made out of; its mainly cotton. Without any added toxins, etc, it seems pretty safe to engrave.

That’s true now, but older Moleskin was toxic. Although it’s unlikely you would receive any of the older stuff if purchased, on the off chance you’re ever asked to engrave something older, validate that you’re working with the right material.

What!? this changes everything. Are you doing a flame test to verify questionable stock?

Are you doing a flame test to verify questionable stock?

Only occasionally. For Moleskines that I get from Amazon I don’t bother - they’re likely “fresh”. But I have had a few I’ve gotten from stores where it didn’t look like they got much stock turnover (they were dusty in fact). Then I peeled back the inner frontspiece and xactoed out a test piece.

thanks so much, that’s just what I wanted to know. Wow - this opens many possibilities.