This project has taken months to accomplish, I made a part, then later another part and everything just hangs about, so yesterday I finally put it together. a bit different than the original plan. 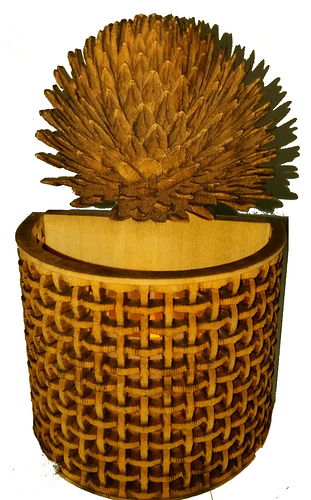 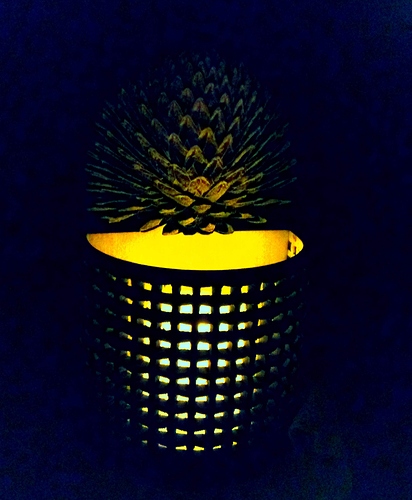 Wow! Tell us more about the various parts and how it all came together. Curious minds want to know…

various parts and how it all came together

I have been trying to figure a way to engrave two sides 90 degrees to each other that would be columns on the corners… Then I was also thinking of bent thicker engraves where 2 or four of them would make the 360 but realized after making just one that precise making of multiples would also be tricky,. The problem I had with the 360 degree lamps was how much changes in humidity changed the size so by the time I made a base the cylinder was a different diameter.

I had engraved the cactus by working a regular photo but was not very happy with the result, though as lit by the LED it is much better. I also did not think the light would fit but it just does, a bit smaller and it would not.

Anyway, I got tired of looking at them in the way and put a light between front and back with a bit of paper towel cushion while gluing to make sure it would fit and then made the bottom.

Note: it would seem that opening a circle in Inkscape to 180 degrees does not make a closed object but only an arc, so I cut the arc as close as I could to the edge and had less than a millimeter to go.

Nice work! It looks wonderful when lit up. I’m like that too…make things that take forever to design and produce, but they ususally are well worth the time and effort.

Fascinating! First I thought that the front half couldn’t possibly be one piece, but it is! The cactus looks very 3D.

the front half couldn’t possibly be one piece

The floor is a separate piece

Very interesting design. Glad you stayed on it to finish and share your results.

Glad you stayed on it to finish

Not so much stayed as wandered into it several times over the months. I have a lot of that hanging about,