Another cutting board engrave

I don’t post most of my work here simply because it’s pretty mundane stuff. Same techniques other people are using but different subject, size or art so nothing really interesting.

But my youngest son’s birthday was yesterday and he’s a dedicated foodie who loves messing around in the kitchen. He’s also a sci-fi and Star Wars fan.

I decided to repurpose my Millenium Falcon clock design file from a few years ago and use it to make him a serious cutting board.

I sized it so I could just fit it into the GF for the engrave, expanded the outline a qtr inch and sent that through Vectric’s VCarve Pro so I could cut the board on my CNC (Onefinity Journeyman for anyone who’s interested). I got the Onefinity last year to replace the Shopbot because it has a 48" wide bed.

Next came a board glue up so I could get a 12x18x1.75" chunk of wood. That went into the CNC to be cut to shape. I considered doing the engraving using a v-bit but the VCarve simulations didn’t look like that was going to give me the resolution I wanted so I went with the GF as initially planned.

After cutting out the Falcon (it’s about three-quarters to an inch smaller than the starting slab) I sanded it with an orbital hand sander and my bench top spindle sander from 80 to 220 grit. I figured I’d want it smooth before engraving because I wouldn’t want to lose the engrave to aggressive sanding and to help my masking to stick.

Then I took the slab and the cutout board to the GF. The slab provided me with a readymade jig that I could just drop the cutout back into. Figured I’d I messed something up I could use it to help get my alignment right for a second run. I masked the Falcon so I could run a very low power score of the cutline to get it aligned.

Lined everything up in the GFUI, ran the low power score, nailed it first time and removed the masking. Then I ignored the cut line, repeated the set focus, and ran the engrave. For some reason I hung around watching it for 2 hours. I must be letting the reports of rogue head movements and fires get to me. Typically I’m much more casual about unattended long engraves

I oiled the board first with a soaking in food grade mineral oil and then four coats of a mineral oil/beeswax mixture buffing between coats. That gives a nice soft looking, but hard finish. Labeled the back with a removable “Cut this side” P-Touch label and sent it off to the birthday boy.

If course he decided to take a few days vacation and is out hiking this week so his present is (hopefully) awaiting his return. 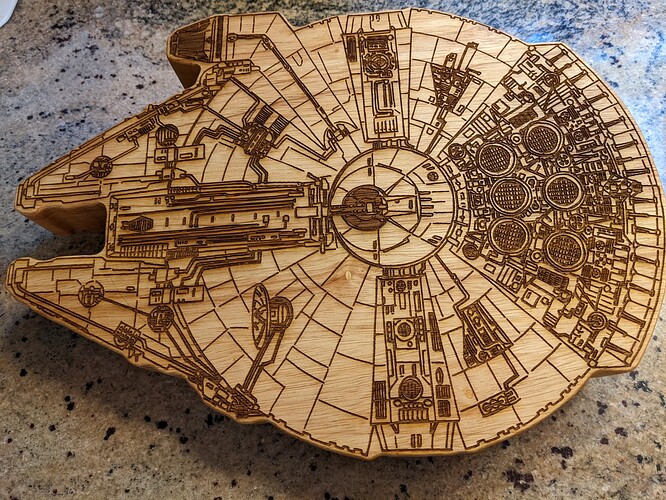 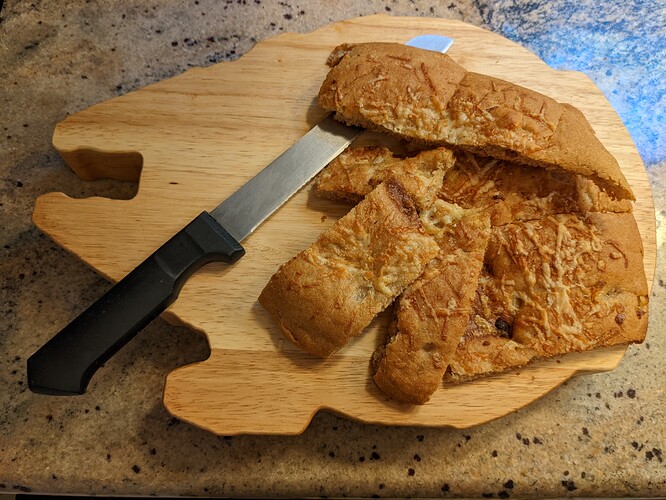 Neat idea! A laser is the only way to get that much detail. That will display nicely, and I’m sure he will cherish it because it came from your hand.

Love it! I am sure he will too!

Wow! Nicely done. This is a wonderful gift. I’m sure your son will enjoy showing it off as much as he enjoys using it.

I don’t post most of my work here simply because it’s pretty mundane stuff. Same techniques other people are using but different subject, size or art so nothing really interesting.

I think tuber are several of us that think that way. We’re probably all wrong.

“Chewie, we’re home.” I really like it, hope he does too

Magnificent! He will be thrilled. Nice to have multiple tools to work with…all of them enhancing one another.

Pretty cool. And the engrave looks great. The next present can be a stand to display it on end on the counter.

It’s beautiful! He is so going to enjoy his gift. Gorgeous job on the engraving!

Nice to have multiple tools to work with…

Yeah, it helps a lot to have the right ones on hand to make the job doable in a reasonable time. Makes you think about the effort that classic sculptors, woodworkers and others put into their work.

Good thing Netflix wasn’t invented in the 1600s or we’d never have had the Renaissance.

Outstanding! Lotta work went into that but totally worth it.

Very creative, only problem is how do you top that?

Fantastic. May the food force be with him.

Incredible, the detail is amazing!

watching it for 2 hours

Great patience. I have a nuclear meltdown if the engrave is over 5 minutes.

Love it! Hopefully it is still there when he gets home. I am sure he’ll love it. You probably should have put his name in one of the pointy ends (as much as a huge SW fan I am, I don’t know what that part of the ship is called!

) - because surely someone will try to steal it from him!

I agree with @djfb - it needs a stand so he can see it easily every time he (or anyone) walks in the kitchen.