I posted a while back about a necklace i made from a tip of a deer antler. Well, I have expanded that a little further. My parents are retired and as a hobby collect old furniture and refurbish it. They also tear some of it apart and make new things out of it. They take it to local craft shows etc. to sell. So i made this up and send with them. Have sold a few so far. 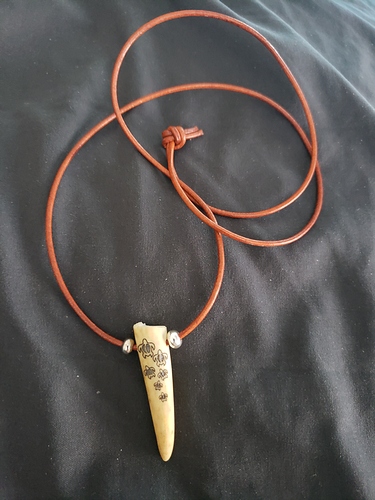 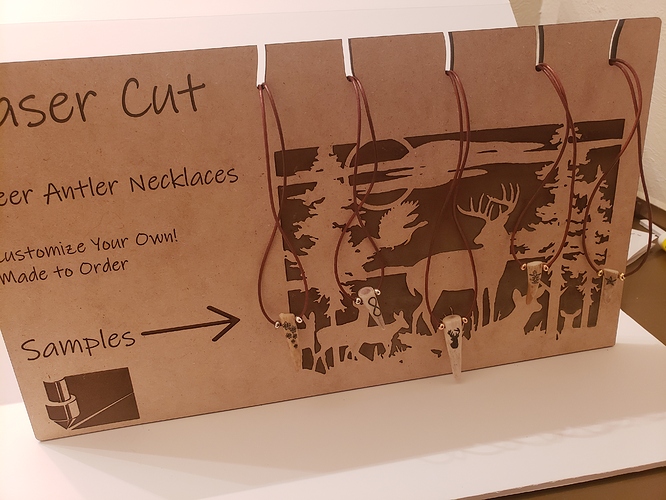 Very cool! The contrast is fantastic and the display board you’ve made is equally awesome.

Beautiful! The silver bead on either side is a great detail/accent.

But for the sign, it would be easier to see the samples if they weren’t against the image–which is really nice image–but it’s hard to see the samples when they are over top of it. And color contrast would help make these gorgeous pendants “pop” and not blend into the background… anything that makes it easy for shoppers to see the item actually for sale (or samples) from 3-5 feet away is key–catch their eye first, then draw them in and they can get the details…

I agree with @bansai8creations on the display - it’s lovely but it would be great for your necklaces to have a visual pop - maybe black velvet behind them so there’s more contrast and move the patterned part to the right side of the display?
Nice necklace designs!

That is true, it could use some more color contrast. Might try filling in the picture engrave with black epoxy.

Or, since the knot is held by a screw over half way down the back, maybe letting the antler down further to lay on the table on a dark cloth.

The necklace/pendant looks good against the black in the photo you attached fir showing the single one–as @jeanneleigh noted, maybe get a black velveteen covered form (or wrapped block or pillow) the pendants sit on, and the sign positioned above or next to it. But try a couple colors to see what is most complimentary to the pendant in your eyes & pretending to be a shopper glancing at tables walking through a craft show…

The contrast on the sign you made is good in & of itself–it’s just the pendants are nearly the same colors as in the sign and are hard to see, as well as the picture of the deer is really nice to look at, and may distract from the pendants themselves… (maybe laser cut a silhouette of a deer or deer head and put the text on that?) Anyway, just ideas–I’m always messing about with what I sell & how best to display them & signs for them.