Another crowdfunded laser-based project I backed in October of '15 is the Eora 3D scanner. The original projected delivery date was June of '16. Here we are, nearly a year after that, and all we’ve received are a bunch of promises. Actually, we’ve also got some photos of boxes of components, which is something I actually appreciate.


The thing looks awesome, but damn do I ever wish they would just deliver the F-ing things already.

There are a lot of people crying foul, calling it a scam and whatnot. Personally, I’m still under the impression that a laser scanner is coming my way. I was just wondering if there are any other Glowforge backers who are also waiting on their Eora scanners and if there are, what are your opinions?

I hadn’t heard of it, but it looks like a very tempting product. Bummer that the wait is just as long as ours. When (not if, I hope) it comes to you, I hope you’ll report in on how it works, especially in conjunction with your Forge.

Looked at last year, was interested, couldn’t justify fronting the money after committing to buying a Glowforge. I might review this soon.

Waiting on one. If it comes to fruition it will be great.

my co-worker backed this. I want her to get it so I can get a scan of some stuff. Looks promising in that last update! Hopefully it comes out soon. I backed the OLO 3D printer too, and am waiting on that thing.

I backed it too. Last I heard they were promising that it would ship in June, so I expect it in July at the earliest.

I currently have 15 other projects backed and waiting on. I’m hoping this is not the first failed project I’ve backed. (I’ve backed about 40 so far and all of those have delivered).

I’ve only backed a handful, but most seem on track. One is delivery very soon. For those complaining about how much information

doesn’t share, I’ve seen more updates from @dan here than I have from any other campaign I’ve backed.

I admit that I have a Kickstarter problem, but I do my research and will back out if I start seeing issues. I backed out of the Coolest cooler because they were only expecting to sell something like 500 coolers, but sold something crazy like 60,000. I felt they couldn’t handle that kind of ramp up and canceled. Producing 500 vs 60,000 of anything is a completely different production ball game. 500 coolers could be assembled by a couple of guys in a garage over a couple of months. 60,000 requires an assembly line of people, a warehouse and a lot more overhead.

So many campaign creators forget to communicate, (or don’t because they know they stretched the truth in the campaign) which causes their backers to think the creators have skipped town with their money.

I usually assume the product will deliver at least 12-18 months after their original ship date and most of the time I’m right. You don’t go from prototype to full product in a month or two especially if electronics are involved. Heck, it takes at least a month for UL and/or CE certification and at least a month for FCC certification - and that is after the production unit has been built.

Well said, I often wonder how many of these Kickstarters realize the FCC is involved and has teeth. I think those questions should be raised by Kickstarter before allowing projects to go forward.

Kickstarter launched a training course for new contributors, so hopefully, that’s covered. If not, they will learn when the product is refused by US customs.

Sadly while I still back a lot of projects but I’ve soured a lot on the kickstarter and other crowd funding brands. They have no motivation or apparently interest to keep low quality projects or scams off their site and are all too happy to ignore projects and pass on any responsibility once they have their cut of the take.

Hey hey! It seems that they’re actually about to start to ship these things! 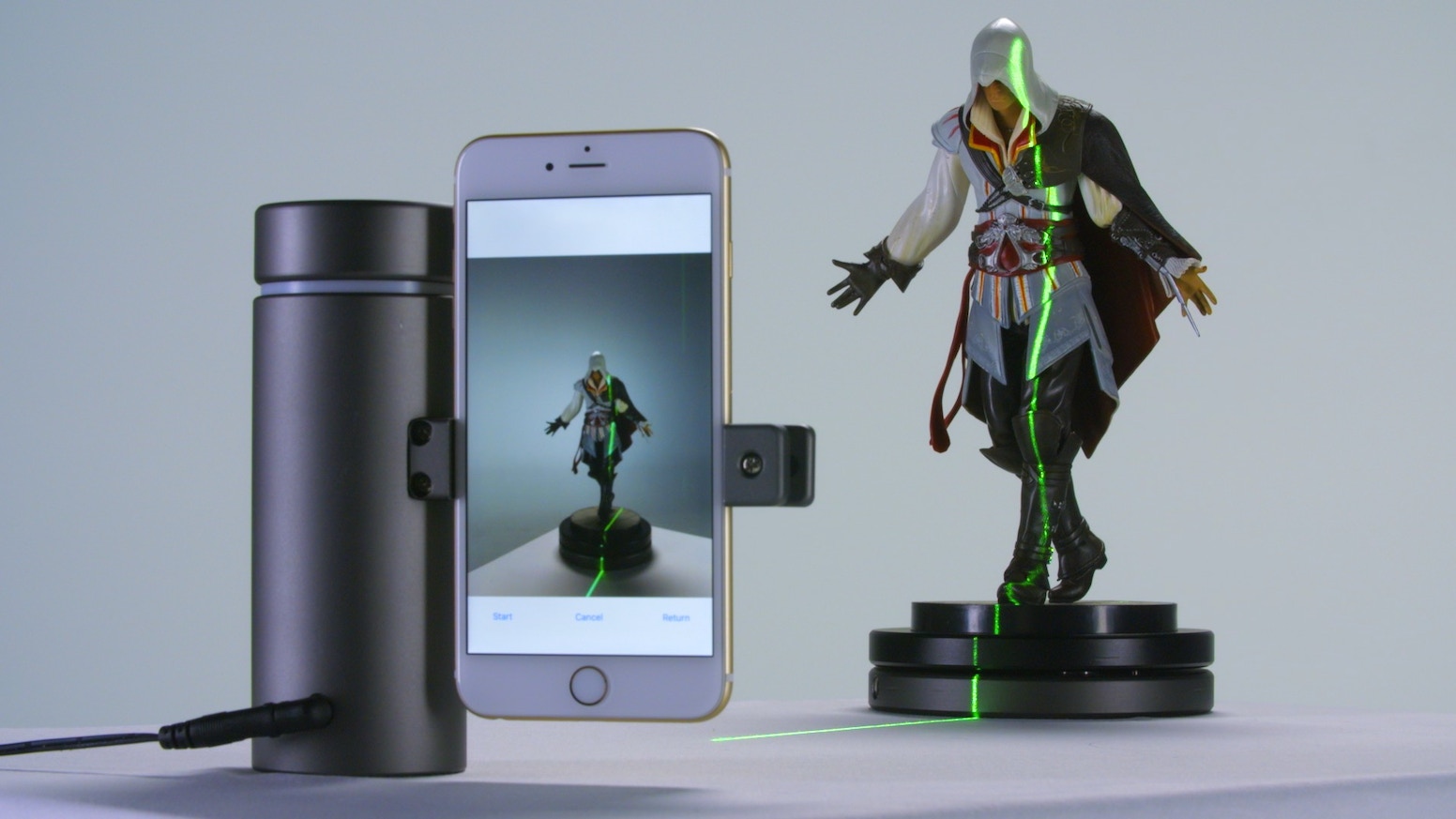 Green lasers are cool, especially when they turn your smartphone into a highly accurate and affordable 3D scanner.

That would be me. I see it as rounding out my personal maker space.
Just hope it works as advertised.
I’ve tried several of the software only solutions with real poor luck.

I may or may not have backed, I don’t remember now.

My scanner is on the way. Yay and stuff… except, last I heard, they don’t have an Android app yet (they only had two years after-all) so I’ll actually be receiving be two paperweights. And their iOS app is apparently all but useless.

Backer. I have received my scanner. It appears the turntable is broken. Submitting for support seems a LOT harder than Glowforge. Now to find out how well they expedite warranty and fix stuff compared to Glowforge.

Hi. I just received mine. I’m using android and I’m unable to pair it. There seems to be no way to get support. It’s weird… It’s an impressive price of hardware. Totally solid.

If anyone knows of a forum where I can get help, please pass it on. I only see Facebook and it looked like they’ve abandoned it.

(Why can’t every product have a Glowforge forum)

From what I can see there is zero support for Android at this point and very sketchy for iOS.

iOS works if you can figure out all the details for it. It has no manual, just their videos and few instructions in the email. It is nice as far as it works. I just need some resolution on my defective turntable. No responses yet, but trying again.