Anyone else using VCarve Pro

Hi,
As posted elsewhere, my Pro arrived on Friday. So far, have made a few different things and have been pleased. Since I come from a CNC router background, I am very used to creating vector toolpaths in Vectric’s VCarve Pro software. So when it came time to design some parts, I thought it would be easier to start with the software that I was familiar with. I’ve found it works pretty well, thus far. I create the vectors on different layers, assign the layers different colors (apparently an important step), and export the desired vectors as SVG. These seem to load right up into the GFUI and I can assign operations to the layers as desired.

I had been contemplating designing an air register for my HVAC system to match the others in the house. This return grill is larger than what is available in the off-the-shelf product line, so I am working on making my own. This “proof of concept” is destined to be a trivet due to some operator error, but I was pleased with how it came out. 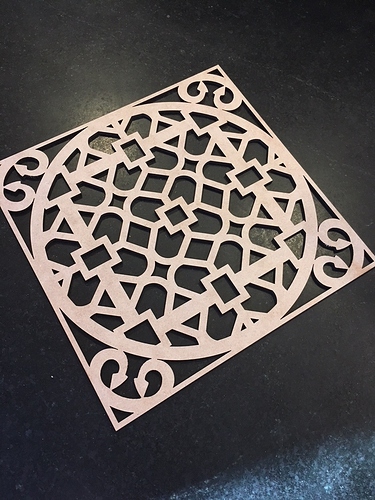 And I’ve been working with my daughter on a Harry Potter themed Monopoly set and we decided to see about making our own coins. Here is a prototype we made, using some 1/8" red oak strips that I sliced from a board that we milled from a neighbor’s tree. We used the Proofgrade settings for cherry hardwood. 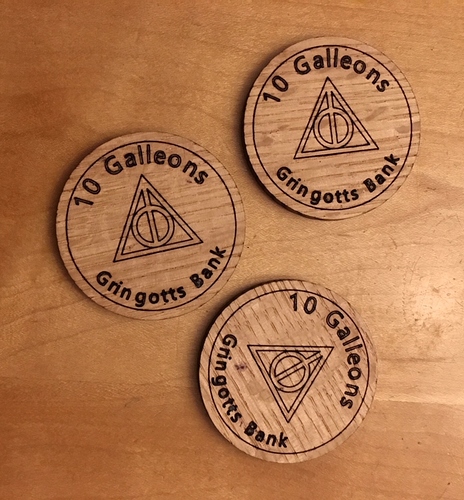 Anyway, not bad for a first go-round. Curious to see what others think about VCarve vs. Inkscape, since I know the former very well and am a complete novice with the latter!

Great job! That will make a cool register cover!

I use onshape.com a cloud based cad system. There I design the projects, put them together then export the individual pieces as DXF. Then import those into Inkscape and clean them up and save as svg.

it either goes direct, or handed off to Inkscape for the final edit.

What are rhe “final edits” that are being done in Inkscape? Can you give some examples of the steps you take there that can’t be done in F360 or Oncad?

Great projects! I would stick with what works for you until you run into a situation that can’t be handled by the VCarve Pro software. Depending on the type of work you do, that might never happen.

I also use VCarve Pro for CNC work, along with Fusion360. I am trying to force myself to learn Illustrator at the moment, so I am using F360 in combination with that for GF work. But if Vcarve works for you, I would stick with it until you find a need for something else; or if you want to subject yourself to unnecessary pain like me.

Mostly color coding lines and adjusting line thickness. Sometimes I can skip this step if I use the Shaper plug in for output from F360. Not always though

Pre-Fusion 360 I used it all the time. After F360 I exclusively used F360. The only time I wipe the dust off that VM is to use it for ornate signs as the V-Bit function in F360 is nowhere near the caliber was VCarve.

Designing with it (VCPro) to the use with the Glowforge is possible, just not ideal. If you are designing sized specific or parametric designs F360 all the way. Everything else Illustrator (or the likes) would be best.

What are rhe “final edits” that are being done in Inkscape? Can you give some examples of the steps you take there that can’t be done in F360 or Oncad?

One that I often do is to “join” the paths as the motion planning is much faster for cuts on a continuous path rather than a set of individual sides (e.g. a square could be 4 individual paths or one square shaped path). The motion planner has a habit of not doing the logical path to path, so it jumps around a lot which of course slows things down.

I don’t know enough about DXF’s internals to know why these exports from OnShape are often individual lines rather than a path.

That’s why I import the dxf to Inkscape. That and color coding lines, adding in cross hairs for my jigs, copying multiple parts, nesting items, etc.

I use Vcarve Pro for CNC projects but only on the back side like the GFUI. I do he design work about half or more the time in Corel or Inscape. Vcarv is usually just for the toolpaths.

export the individual pieces as DXF.

Have you tried the Kiri Moto application for OnShape that exports SVGs? Often I can just upload that design to the Glowforge if it doesn’t require coloring different paths to differentiate operations. But opening the SVG in Inkscape works well. It’s an easier workflow for me to not have to deal with DXFs.

I’ll check it out, thanks for the tip.