Anyone have any luck with Leopardwood?

I’m in process of making some boxes out of Leopardwood. I searched the forum regarding cutting and only found one, what appears to be, a failure. I have 3/16" and 1/4" pieces to cut. I was wondering if anyone has had any good results with relatively thick Leopardwood? (I’m already starting to think about alternative methods before I even had a chance to try).

I will certainly post here if I have any success.

What happened when you ran the standard test array? I have a couple pieces of leopard but haven’t done anything with it yet. I bet it’s inconsistent like other variable-structure woods (zebra etc), but shouldn’t be impossible.

I’m sort of putting the cart before the horse by posting. I haven’t even had a chance to try it yet. I was just kind of freaking out because after searching the forum the only info I found was a failure (I guess I should have read that as just “untested”). I thought if someone had some info I would be that far ahead.

I think I will be able to cut later in the week.

I will certainly post here if I have any success.

We’re all waiting to see!

So I had some success with Leopardwood. I made some 3/16" stock and some 1/4" stock. One of the first things I learned is that I’m not even going to attempt 1/4" but 3/16" stock was do-able. My final setting that worked best after testing was 118 full (basic) power and 2 passes. It flamed up pretty good and charred quite a bit but it did cut through on the second pass. If I were to do it again I would adjust the kerf up to take the added charring into account. As it is I made some Leopardwood filler out of glue and sawdust.

I’m happy with the results. I really like how the finger joints disappeared due to the wild grain. 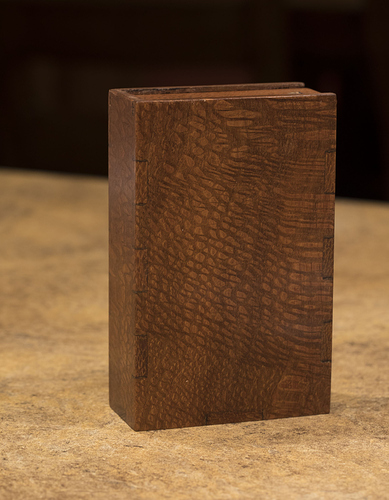 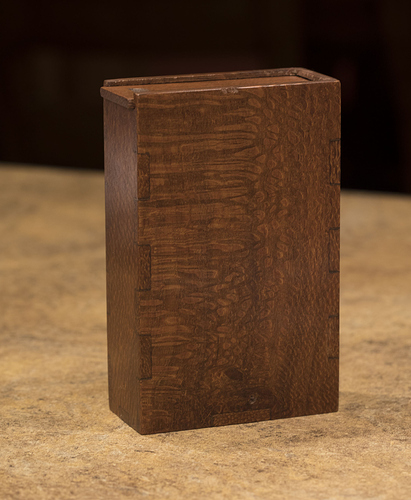 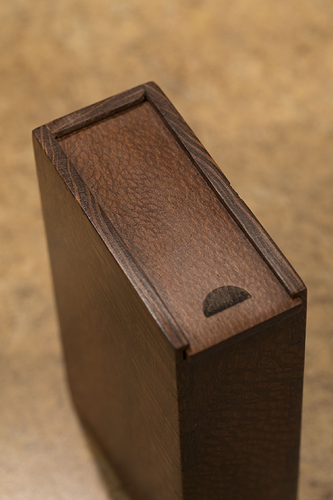 Here is the final joints after filling and finishing. 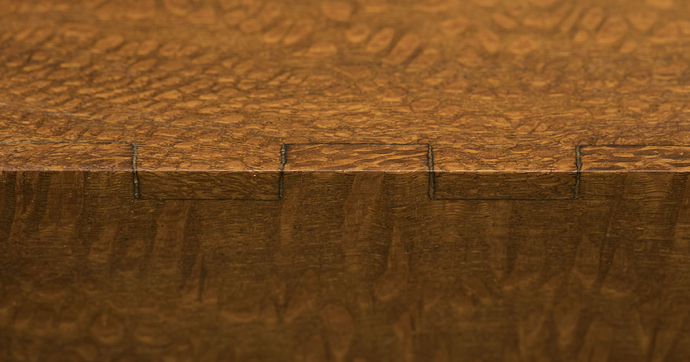 That’s beautiful figuring in the wood, and you’re right the joints blend in great because of it. Great job.

I did not have a problem with variable grain in Zebrawood, it was only that If a coal got started It could continue on its own without additional blowing or heating. Is that what you found with leopardwood?

That is beautiful wood and looks Great.

I didn’t feel like it would continue burning, but it was creating a pretty good blow torch flame.

It would be interesting to see one of these similar to the Zebra ones,

I did something similar but didn’t save them. They also weren’t labeled so I wouldn’t know what settings were. I should use a better system.

but didn’t save them.

Considering all the other containers of scraps a collection of those parts a box of those are not a problem What they lack in depth of information they make up for in consistent and comparable format.

i don’t know about leopard wood, but be careful with lacewood. some people can have allergic reaction to lacewood that’s been cut or engraved. i’m one of them. if you breath in some fumes or get it on your fingers and touch some part of your body that has mucus membranes, it can have a negative affect.

I tested it on myself and was fine, but when working with it I wear a respirator and gloves to be safe.

Are different names for the same thing as is Tigerwood and Zebrawood. OTH Mahogany is the same name for many different things 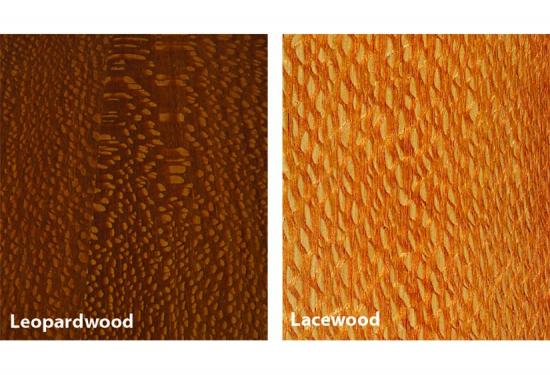 What's the difference between leopardwood and lacewood?

The July 2008 issue of WOOD® magazine shows leopardwood and lacewood. They look similar to me, and I’ve seen each labeled both ways in hardwood stores. If they are different species?

Leopardwood and lacewood are indeed two distinct species, Roy, though people (even hardwood dealers) often confuse them with one another. Use these characteristics to tell the two apart: Both leopardwood, above left , and lacewood, above right , display flecks caused by rays that bisect the growth rings. But leopardwood’s flecks tend to be splashy and round (like a leopard’s spots), where lacewood’s appear wispy, coming to a point on both ends. With a pinkish-brown to chocolate-brown color range, leopardwood weighs in as the denser and darker of the two woods. Lacewood has a light-pink to light-brown color and a sheen that makes it appear to glow.

Leopardwood is frequently confused with Lacewood, and is sometimes referred to as such. In its vaguest sense, the term “lacewood” is used to describe any wood that displays figuring that resembles lace, (which would technically include Leopardwood). Attempts to identify a specific board macroscopically may be difficult. Two Australian species, Northern Silky Oak ( Cardwellia sublimis ), and Southern Silky Oak ( Grevillea robusta ) can both look very similar, and are sometimes sold as Australian Lacewood.

Leopardwood ( Roupala spp. ) can usually be separated from most species of Lacewood ( Panopsis spp. ) based upon its darker color and higher density. Additionally, when comparing the endgrain of these two genera, Leopardwood has wider spaced parenchyma bands: approximately 3-4 per mm versus 5-6 per mm with Lacewood.

I took a look at some leopardwood at Rockler earlier this evening. After my experience with zebrawood, I put it back on the rack…