Arg.... what is wrong with this file?

Why is it that I have this file, and the UI does not do everything in it? It seems to be ignoring some things, and making up steps on its own Can anyone explain what I have done wrong? For background, I used the tabbed box maker to generate what I want to be the base of a house. I mean for the red lines to be scores, and the black to be cuts. When I went to print, it did some of one thing, some of another. But definitely did not do what I thought it would.

Please zip the file and upload it if you want somone to look at it.

Its there. Right click and save as. It’s small but easily visible.

Sorry, if it was “easily” visible I would see it. haha Thanks. I swear I need new glasses.

Yeah I haven’t figured out how folks attach things that look like the originals yet. Do you still need me to zip it? And thanks for looking!

No I see it now. I’m gonna use some of those Zeiss wipes on my spectacles.

So one thing I see is that you have a score line on top of a cut line on the line underneath the two triangles. Is that one of the operations that didn’t perform as planned?

Well, that one I got lazy and figured if it scores then cuts on the same line, it’s fine. But when I printed I was missing the windows and all the other score lines. And was hard to tell what it would do because the thumbnails are so small.

So when you drew the lines to make the windows, it looks like you drew a straight line then eliminated parts of the line. I don’t think that is a clip path, but that is where your problem is. Someone better at this will be able to help you.

Windows aren’t paths and lots of unconnected nodes (and double nodes, but that would still work)

I think you need to do the object to vector on the rectangles and remove one of the lines from the zero height rectangles or they will score twice on each. 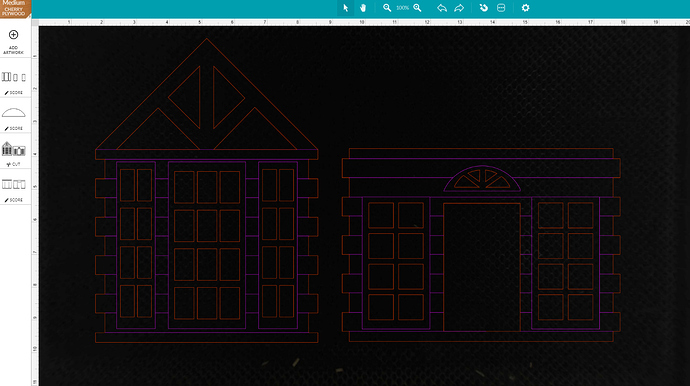 I think that a lot of the score lines are zero height rectangles and the scores around the door and windows are also still rectangles,

You know, I bet you are right. I imported parts of this from an old PDF file I had. I thought I just drew straight lines for the scores, but I bet I copied the ones I had in the old file instead. The windows were all drawn as rectangles, but again maybe the import messed me up. I’ll give it another look, yesterday it just seemed like such a simple thing not working. In the light of day, it will probably be much easier to fix. Thanks for the assist!

Yes!! That is what I was trying to get. Thanks so much! And how did you do that? I have four other walls in the original file

And how did you do that?

Look at my list. subtract the cut lines from the overall, Object > Path everything (if it is already a path it does nothing) remove the line between two points in node mode (may take playing with) leaving only one line where you need only one.

An easier way is to make rectangles to cover two lines and remove the sides.

figured if it scores then cuts on the same line, it’s fine

I’ve read in other threads that lines on top of other lines often get ignored by the GFUI, like they cancel each other out.

After you post look at the code next to the image and it’ll say
![Name of File|19x11](upload://blah blah blah