We have had a few topics on coin sorters and I was captivated by one with an X-acto knife and knew The Glowforge was perfect for it. After a couple cardboard mockups, I did one out of acrylic and some 3D printed parts. It works great.

Well darn. Even the gif is too big. Will post full video on YouTube when I get a chance to upload with other than mobile device. Out of the country for a while.
Inspirational YouTube video: 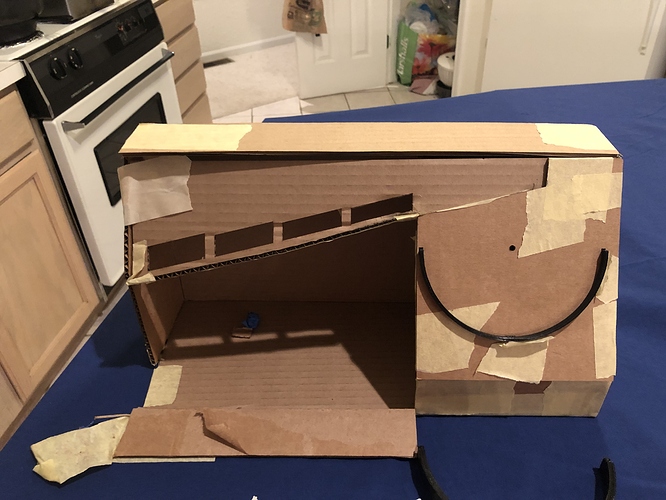 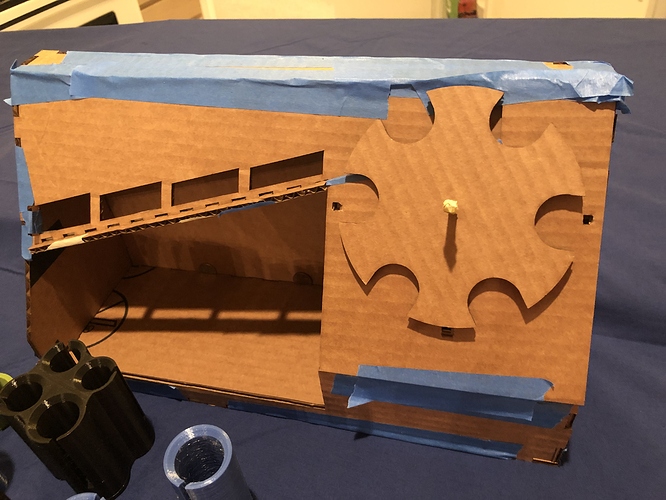 The cardboard worked, but the blade was too thick and it would have smaller coins riding on the top of larger coins and get put into the wrong slot. So I tried chipboard and veneer. Right size, but not stiff enough. 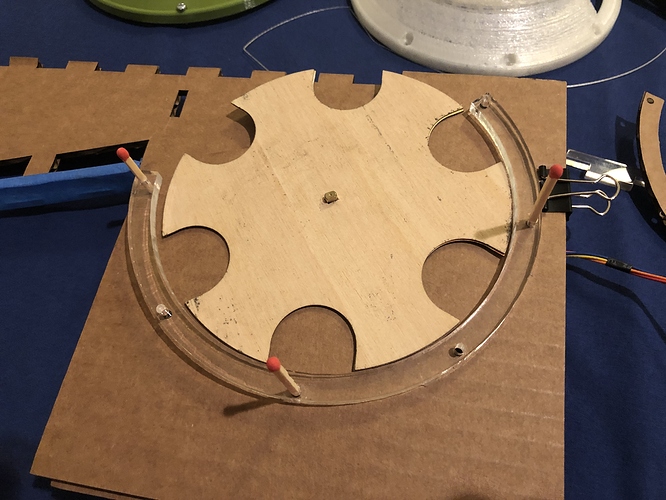 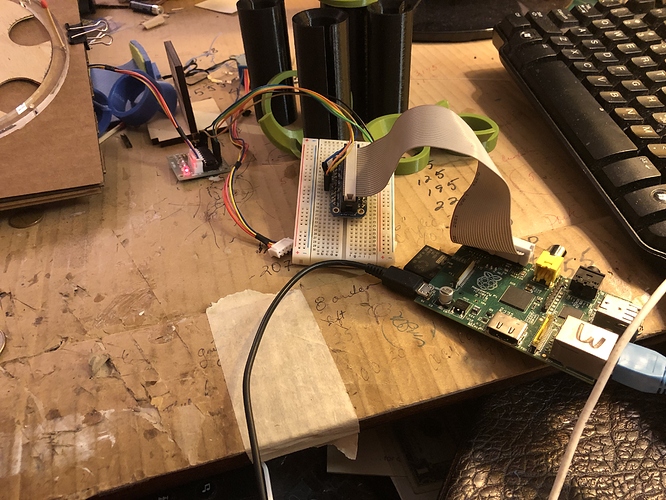 One of the important features was the trough to put the coins in. Had some ideas for a living hinge, but decided that a 3D printed scoop would be best. The laser and the 3D printer worked great for this part. The acrylic half lid allowed for clear viewing. 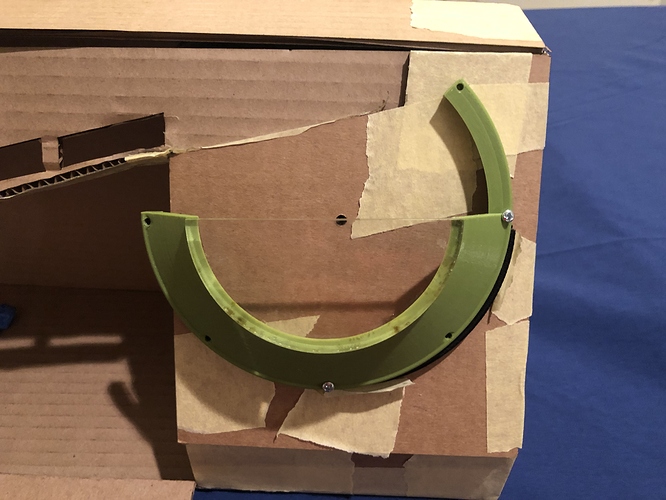 Some of the iterations of the blade. 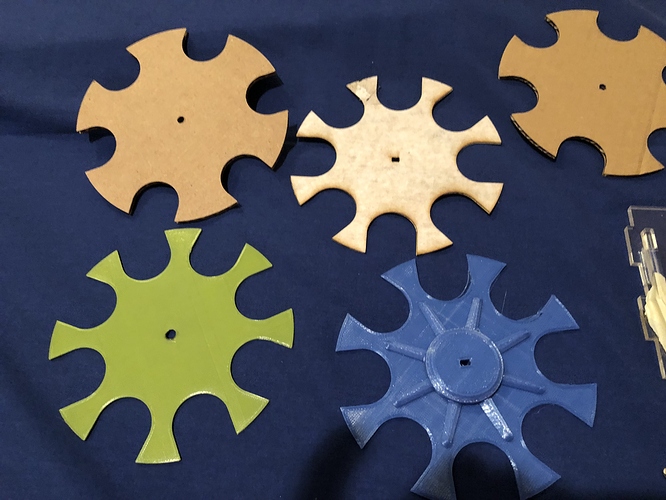 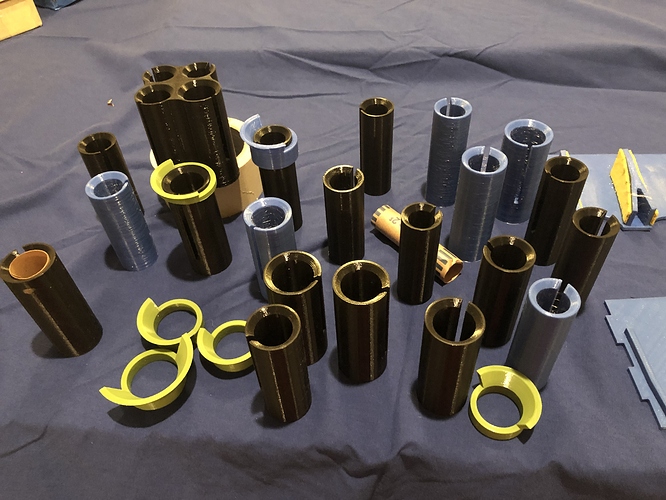 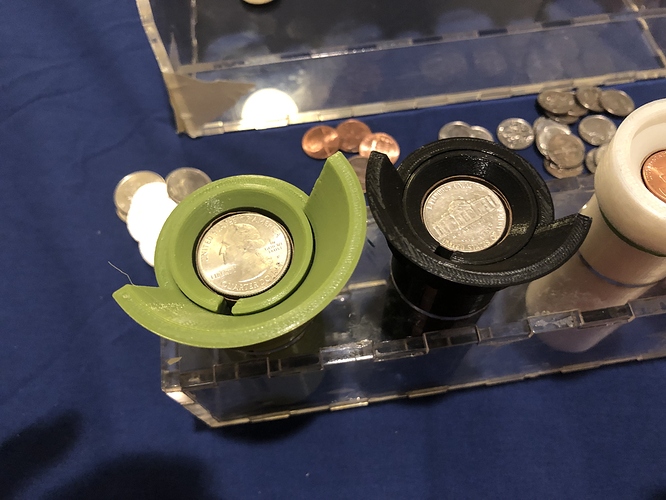 The hoods were necessary because the coins really bounced around the ledge after going through the sorting slots. 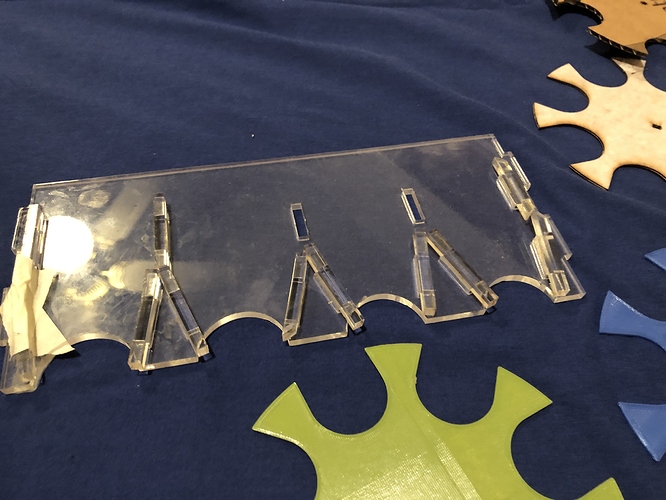 IMG_0800.JPG4032×3024 2.05 MB
At first I used a ledge like in the cardboard model, but it really needed bigger sides. I figured that a 3D printed ledge would just be easier but it could be done with the laser just fine. 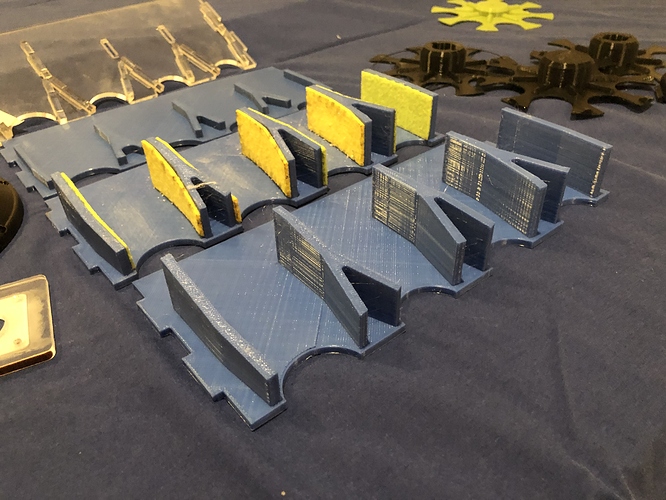 The felt again was necessary because the coins were really jumping around.
Cutting the felt with the Glowforge was perfect since each was a specific shape. 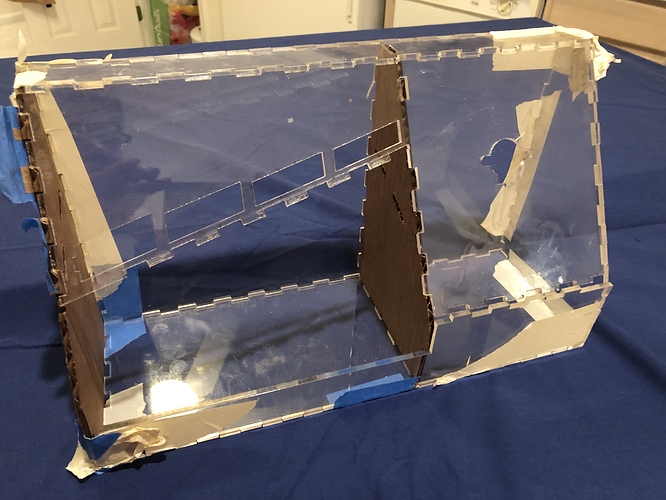 Initial acrylic mockup of the case. 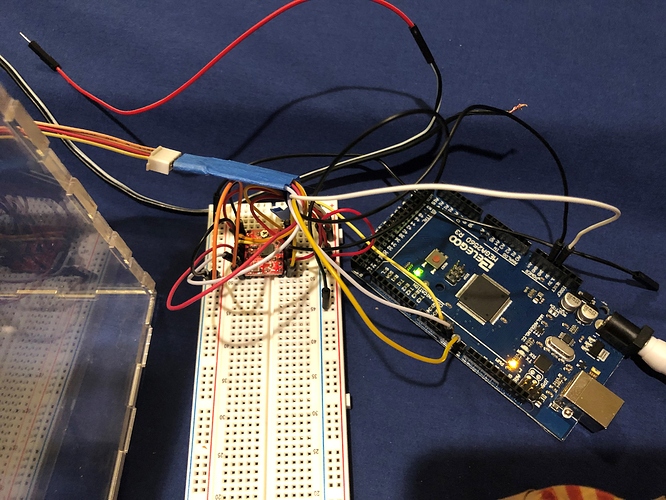 I ended up using a NEMA 14 stepper that I had taken from an old HP Scanner. Took me a bit to get the motor control right. I finally bought an Arduino starter kit and a couple drivers. I have an ESP32 in mind for final control, if I get to it. Would be interesting to get the control wireless and set some counters up or something. Simplest would be to get a potentiometer and a 555 timer in the circuit so it’s all self contained. The NEMA 14 motor has plenty of torque to manage coins, as long as I don’t load up too much. 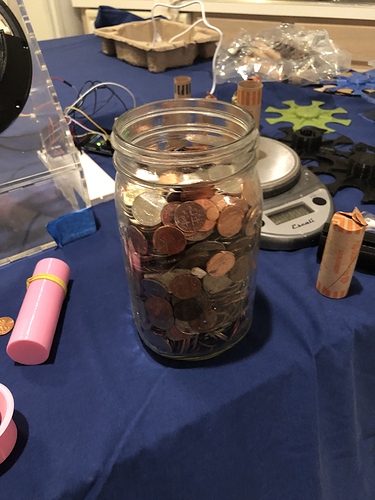 I did test sorts with a mix to fill up completely the four rolls. Three times in a row, 1 minutes 37 seconds to 1 minute 55 seconds, perfect sorts. 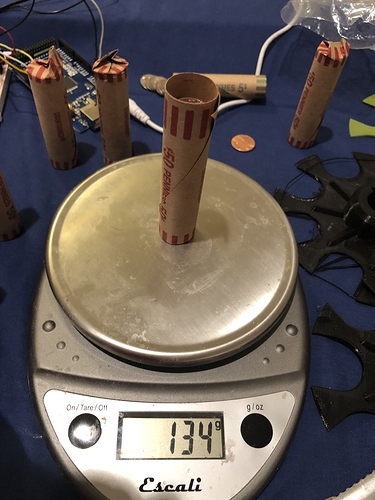 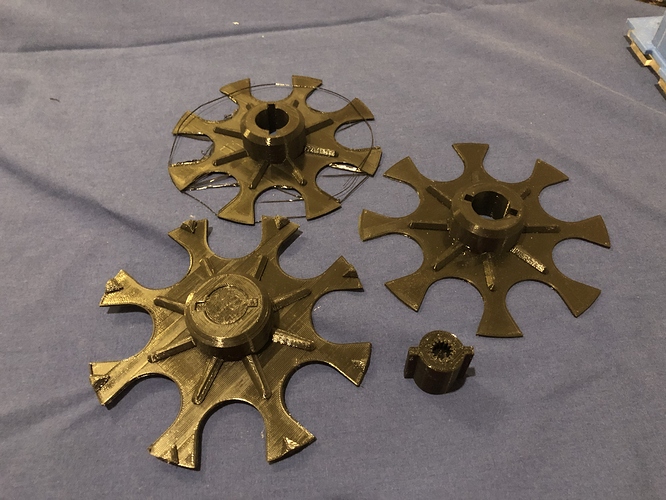 One of the interesting problems is of course how to attache the blade to the motor shaft. The motor I ended up using had a gear on it that just wasn’t going to come off. Also was the issue of how to print the blade easily. The two parts with a hub and a wheel worked great. Kept tweaking the blade profile to ensure that it kept the coins flowing. 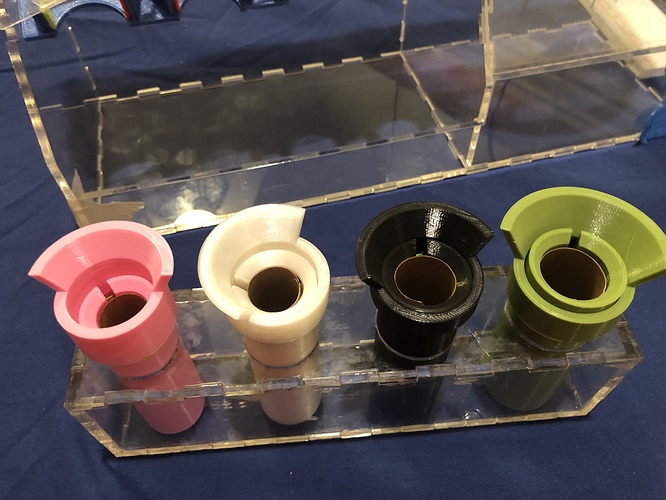 I just think that anyone making projects could benefit with a laser. The ease of cutting panels and boxes is great. 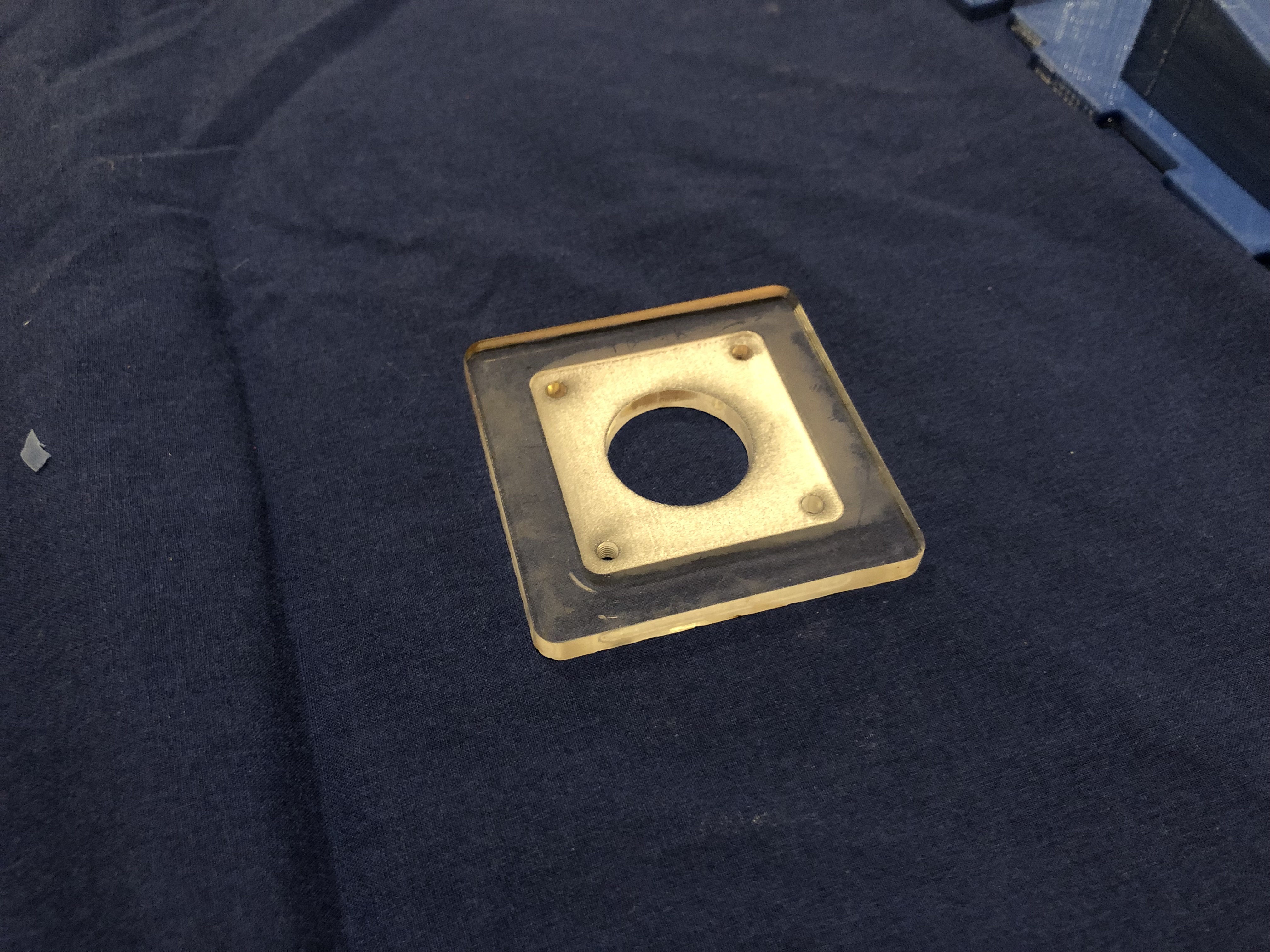 Testing the motor mount inset for the NEMA 14.

The final haul of four and a half years of pocket change dumps. 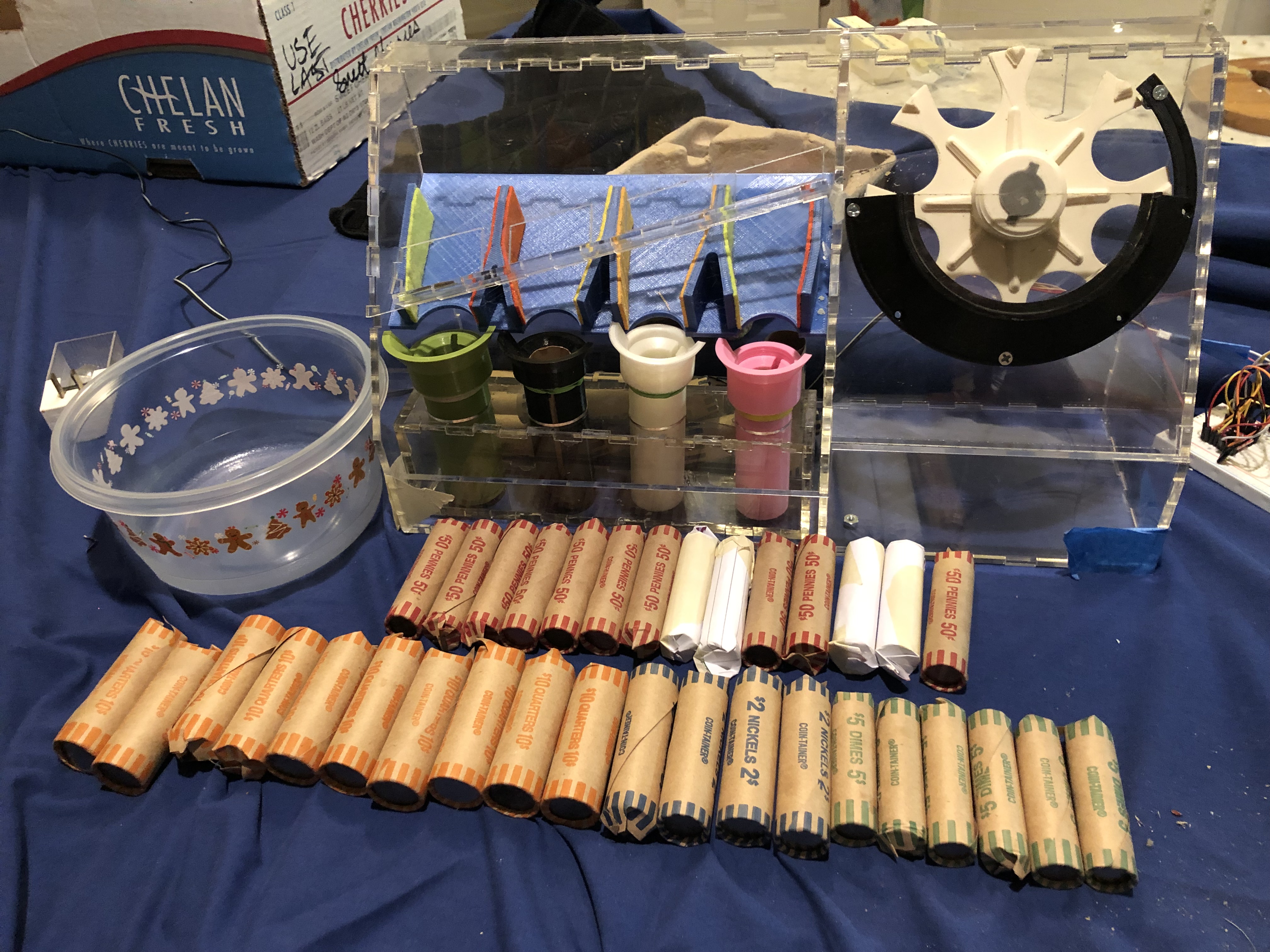 Fantastic build! You should work this into an instructable,it would end up being a featured instrutable.

Definitely steps it up a notch, and excellent Instructable idea!

I second the motion!

Yes, I haven’t been sharing the love lately. Took a month after the thing was completed to finally post it. I have all the video for a YouTube on the build, but just can’t motivate myself to do the next effort. I still haven’t gotten around to posting my models on thingiverse.

WOW. That’s very impressive, in a geeky-cool sort of way!

Way cool! Kudos on working through!

Wow! Will you post a video of it it operation? Great build pics too!

I just love my fellow Glowfolk. Obsessed enough to count the change in the picture!

Amazing project! Most of it is way over my head but I’m really looking forward to the video. I had no idea 3D printing filament came in so many cool colors.

Great project Marion! The write up really conveys the tweaking you went through. The 3D printer and the laser really complement each other in their ability.

And who says change comes from within…

You hinted about a big build a while ago and I’ve been patiently watching and waiting!! You did not disappoint and this is awesome. 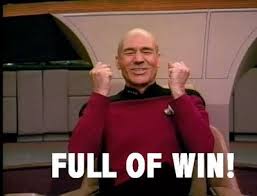