This isn’t a Glowforge project so much as it was a project where I used my glowforge (and a 3d printer) to create components. 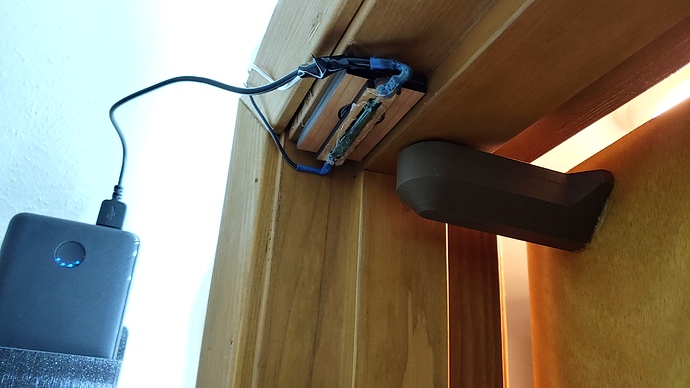 My hallway closet is dark and kind of hard to see into. I wanted to add light, but there’s no power in the closet and I don’t feel nearly qualified enough to run my own power through my house. I also didn’t want to have to flip a switch on and off for the closet light.

After a few months of noodling on the design, I finally built it this weekend:

I originally was thinking about a motion or PIR sensor, but that was going to draw power constantly. I did NOT want to have to recharge the battery every week or two. That’s when I came up with the idea for using a reed switch - it shouldn’t draw any power unless the lights are on. Since it’s a closet light that won’t be on very often or for very long, the battery should last months.

So I used my Glowforge to lasercut a small wooden enclosure for a magnet, then a small enclosure for the reed switch, and dumped a gallon of hot glue into it then mounted to my door frame.

But other than that mixup, I’m very happy with the result. It works great and looks better than I imagined.

Yeah why not just upload the pic here?

But seriously why a reed switch when a plain old mechanical switch would do?

Yeah why not just upload the pic here?

Couldn’t figure out how

. Went back and figured it out though.

The only mechanical switches I could find were door jamb switches, which would have required me to drill out a pretty significant chunk of the door frame. That was a no-go from the missus.

The only mechanical switches I could find were door jamb switches

Nothing wrong with magnetic switches for battery powered projects. I’ve used them many times for similar projects.

I built a similar setup for my last GF’s pantry, 12V LED strip around the inside of the door frame lit it up like daylight. 8 D-Cells lasted two years. Nice thing about the magnetic switch was it turned off even if the door wasn’t full closed.

Yes! I’m hoping my USB rechargable battery lasts > 6 months, since there’s no power draw when the lights are off.

When it starts to dim even slightly, or even one afternoon when you just happen to think of it, just recharge it.

It will last forever that way.