Available cut size redux - not quite 11" wide, how to override settings

So, I’m pretty sure the extra 0.03 " will not cause a deceleration problem. How can I override the width settings so that I don’t have to re-do the entire design to shave 0.03" off the width of all the parts?

You could try a slower speed so the time to decelerate is not as much. But there is no way to over ride the settings that i know of…

I have cut out to 11.5 inches both on the 12x20 and the 6x12 so i have no idea. You could try rotating the file in the UI so the 11" wide part cuts on the widest part of the material or break the file into separate files…

Hmmm, odd that you got 11.5. I posted a question a week or so ago when I first started on this project, and Vee (staff) said:

The maximum printable area on your Glowforge is 11 x 19.5”, and it’s reduced somewhat when the laser operates at high speed

So, I redid everything at 11" wide. The piece I’m trying to cut is rectangular, with fingers cut into the sides, so I can’t really break it up into multiple pieces, and the piece is already square to the bed so rotating doesn’t look like it’ll work. Screen shot shows the no-go area is definitely short of 11" 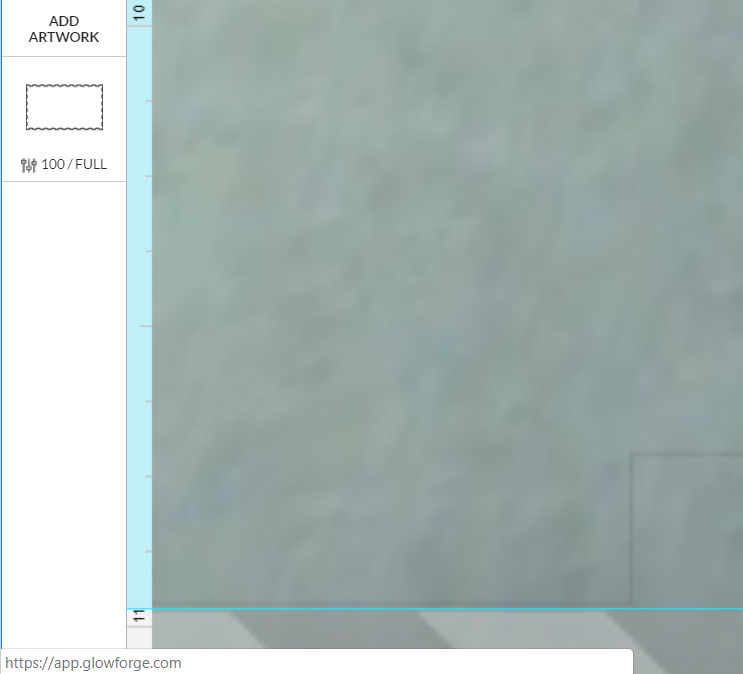 As cutting does not decelerate and engraving goes side to side in any case so there is no vertical deceleration ever. If you are getting 10.97 that is a lot better than the last time I looked…

Even on a basic there is about a half inch at the bottom that cannot be cut but the material can be moved there.
You are so close it would not take much to do the piece in two parts, with the first cuts done on the top while the bottom is down as far as it will go. If you then raise both the material and design some precise number and make the rest of the cuts you will not need to recalibrate everything but you will need to have two sets of colors.

On the other hand it would be very hard to see a 0.03 difference even at the top and 0.015 off the top and same off the bottom is probably less than the width of a laser cut difference.

The 0.03 difference is probably fine, but I have to go through and re-do all the pieces that have a width. Kinda obnoxious. But I’d be way more confident getting things right doing that than moving the piece for a second cut!!!

But even better would be getting the cut size I’m supposed to get. It’s odd that the specs say 11" but clearly it’s a little short of that - that can’t be a camera alignment issue, the ruler on the layout screen is put there by the software! There’s something goofy here, the software isn’t doing what it should, so I’m hoping there’s just an override to manually set the printable size.

Reading more I see that I was a bit mistaken as to the widest cut you can make. It should be 11.5 but I try to keep all my cuts around 10 x 19 max but when I do go wider as when cutting a big box for example I try not to make cuts that need to exactly match. However if you use only the arrow keys you can move your design up and down so any side to side alignment will be kept. This does allow the distance from the lowest cut to the lowest you can get the material distance to be added to the overall ability.

With the passthrough of course there is no such limit.

Thinking about it more not having the correct thickness can considerably change what it looks like is available and what is actually cut with the wrong settings what looks like 10 inches could actually cut 11.5 and be just as far off side to side as well.

Here is a cut i just made horizontal 11"… 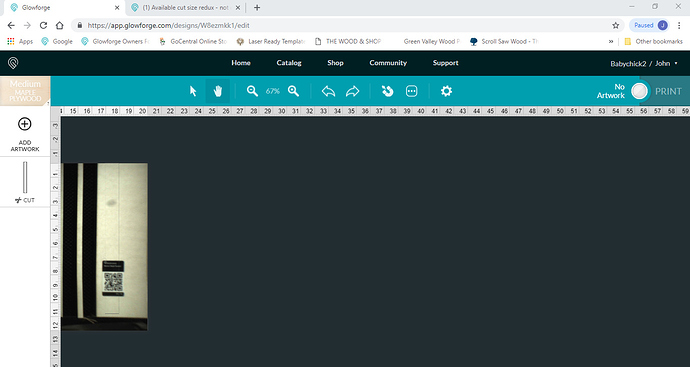 The 11.5 in cut i make on the small hardwood with centered on the tray

the software isn’t doing what it should,

The software ALWAYS does what it should. If it is not acting as you expect it is something you are doing or expecting that is different from what is is programmed to do.

It could be a setting like the correct thickness or as has been the case elsewhere a loose wire making it not work as expected. Even bugs are programmed in and will repeat with the same circumstances.

They’ve also stated as recently as in the last couple of weeks that the current limits are just under 11" (I also get just 10.9") and 19" with the engrave area even smaller.

I’ve only seen one report of anyone getting more than that. Maybe he’s running some beta sotware version of the GFUI since they have said expanding the usable area can be done through software.

expanding the usable area can be done through software.

So far as I can see it can only be done through software, at least at the current hardware, and I do not expect that they will announce that all the Glowforge Pros are actually PRUs and we can exchange them. To even get beyond 20" would take a new crumb tray and major surgery on the machines. the occasional sacrificial MDF or whatever is cheapest would not be a terrible idea just to keep up. Two overlapping 8x19 inch rectangles with one side open could be scaled and moved to the point just before they winked out and that it would be the largest you could make till the next update.

Here is a SVG anyone can use to do that job …

Yep. The current area is a bit larger than the PRUs started with. They’ve made at least one software update to the usable area.

Favorite Tools - Thickness Gauge Everything Else

That’s a cool tool. Here is what appears to be the same thing for a few bucks less. https://smile.amazon.com/dp/B0749HJCVF?pf_rd_m=ATVPDKIKX0DER

I make software for a living, I know it doesn’t always do what the spec says it’s supposed to! The spec says 11" (I think they downgraded it from 11.5" at some point due to deceleration issues).

So, the question is, why does it think it can’t do the entire 11" on the bed for my machine but does for yours? Do you have the passthrough or the basic? There aren’t a whole lot of dials for me to tweak, this is pretty much autopilot. Speed really isn’t the issue either, FWIW. I set cut speed to 500 (highest I could) and it was okay for 10.97. Then I switched to engrave, but set the speed to 500 and it was not okay, even though I hadn’t moved the image at all. I had to drop engrave speed all the way to 120 to make it “fit”.

Clearly it is doing something different, the question is why, and where is the dial I can turn?

The spec says 11" (I think they downgraded it from 11.5" at some point due to deceleration issues).

They originally advertised 20x12. Then changed that to a “target” of 20.4x11.5 which caused a lot of distress on the forum. Then awhile ago they updated the main site to show the current specs so as not to confuse new buyers who haven’t had the history of the pre-release buyers.

Did we just confirm that the new dimensions only allow less than 11” wide? That’s disappointing.

Do you have the passthrough or the basic?

I have the Pro with the passthrough, but as far as I can tell there is not much difference at the place of the passthrough except the hole in the door. For everyone, the actual limits of the software are different from one week to the next (usually an improvement). When I first got mine even three passes of the sane cut did not land in the same place, now I cal almost eyeball a cut where I want it something that was not close before and the camera alignment does not change over time as it used to.

I had the GFUI keep all my settings for a few hours and then quit doing so as someone was changing the software now there is different and much better but it still does not set the thickness automatically.

If I did not know when I bought it the amount that Gowforge is edging toward expectations is almost never announced but always a moving target, then a fair part of the threads in the forum both in complaints and kudos has qued me into the fact.

The best that can be said is all the ways we have posted as workarounds, sometimes to discover that the workaround no longer works or is no longer necessary… I worked in AutoCAD for years and while the changes were more regular all the expectations and issues about what was promised and what was delivered were of a much greater variety than this.

Did we just confirm that the new dimensions only allow less than 11” wide?

The 11" nominal spec is for the height not width. Front to back of the bed. Width is the current 19" nominal size.