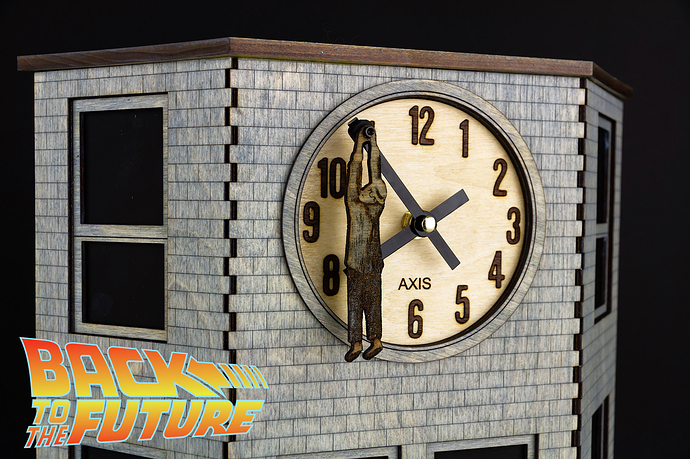 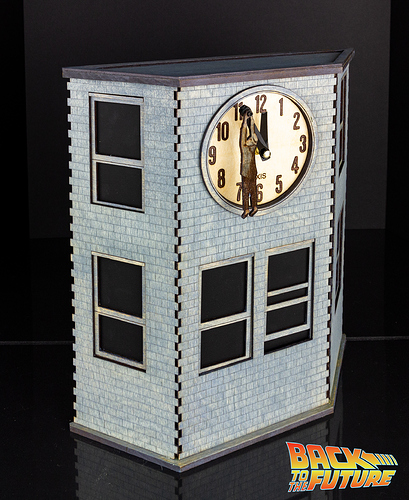 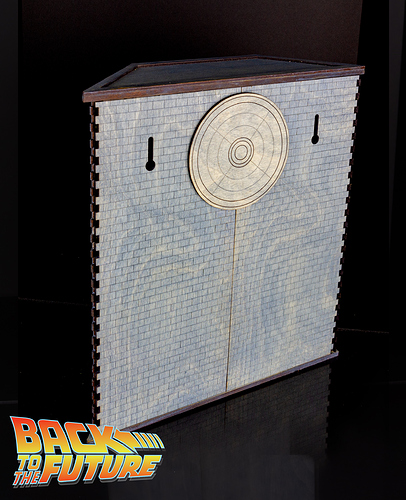 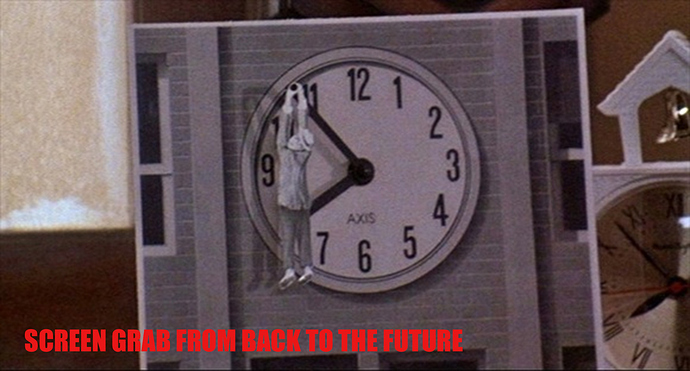 Are you telling me you made a time machine, out of a clock?

I figure if you’re going to make a clock… you might as well do it with style.

This is a working interpretation of the hanging man clock in Doc Brown’s workshop at the beginning of the all time classic movie Back to the Future. The clock paid homage to Harold Lloyd in the silent movie “Safety Last”. It also brilliantly foreshadows Doc’s own infamous date with the clock tower towards the end of the movie.

I say it’s an interpretation of the clock, and not a screen accurate replication, because the actual prop used in the movie appears to be just a flat graphic with a clock movement poked thru it and a paper cut out of a Harold Lloyd attached to the minute hand. I’ve included a screen grab from the movie so you can see the actual prop clock. I’m speculating about this, but the actual prop was most likely made in just a couple of hours by a prop maker after given just a minute of instruction. No shade intended to the prop maker, it’s what I would have come up with given only a couple of hours to make it. But what I have done is recreated it as an actual 3 dimensional clock. If the prop maker had a few days (instead of a couple of hours), this is more like the clock they would have created. So this clock is far superior to the prop that was used in the movie, and if given the choice between this clock and the prop that was used in the movie, Robert Zemeckis would surly have used this clock instead.

The clock is made from basswood plywood, solid alder, and the clock face numbers are solid black walnut inlay.

Available at my Etsy shop at: https://www.etsy.com/listing/885240976/back-to-the-future-doc-brown-harold

Great job making a clock that the end user can replace the batteries. You also solved the problem of hanging it. I wanted to make one for my brother-in-law and was going to make a shadowbox frame for it.

Will have to share this with my husband. I think he and the kids have seen this movie more than most.

It’s an all time classic. Definitely in my top 3 movies of all time.

I never noticed that! We always called him “That guy with the hair…not charley…no not buster…the other one.”

Dr. Brown is on our observatory team. Scroll down. I’ll let him know of your work.

Looks fabulous, great idea! You may want to refrain from using the BTTF logo however, if you are selling this design.

Save the clock tower!

clock to the future?