I’ve always enjoyed building model airplanes the old fashioned way. Thought I’d see if my new Glowforge could help. Though these days I fly RC I thought I’d see first if I could cut something simple and went with an old Keil Kraft free flight model from my youth.

Traced using Silhouette Studio, just because that’s a program I know. Added .010" to outlines to take account of the cut. Needed to adjust settings a couple of times to get right for the light 1/16" balsa I was using, but the results are better than I expected. 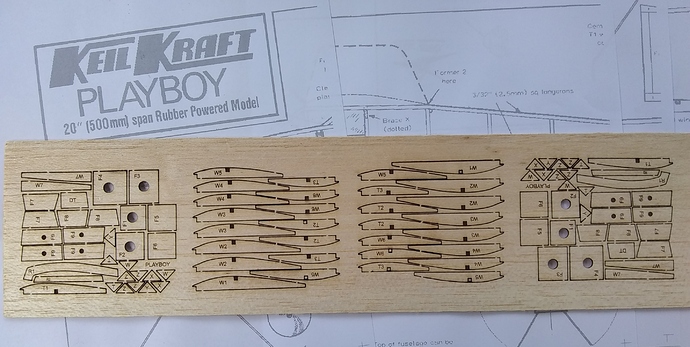 Nice work. Thin materials like that can be some of the hardest to find good settings for, looks like you got them in the end.

Looks really complicated , but must be satisfying to finish. Do you have a finished picture yet?

I keep saying I’m going to locate some plans and cut some… I also keep getting sidetracked.

Been 50 years since I built this model, diligently cutting the parts out of the printed sheet supplied by the kit manufacturer. I might just put it together for old times sake. Outerzone is a fantastic source of plans to trace if anyone fancies having a go. pdf plans can be tile printed, taped together and built over.

I’ll check them out. I used to fly r/c planes and helicopters, unfortunately I lost them all in the Joplin tornado back in 2011 and I started playing with other toys.

Glad you were OK. That was a bad one.

Thank you. It was a bad event, but there were many blessings as a result of it too.

Greetings - how did you make / cut the wing ribs? when i cut - i receive an error that my paths are open? is each cut path actually a ‘shape’? just curious what your work around was. thanks

Not sure what the problem is. I use the paid version of Silhouette Studio because it was a piece of software I already knew how to use for vinyl cutting. I import a pdf and manually trace over the lines to create the parts and save as an svg. Not sure if you can upload files here but if you can post an svg example you have a problem with I could take a look and probably figure it out.

You may find this useful: 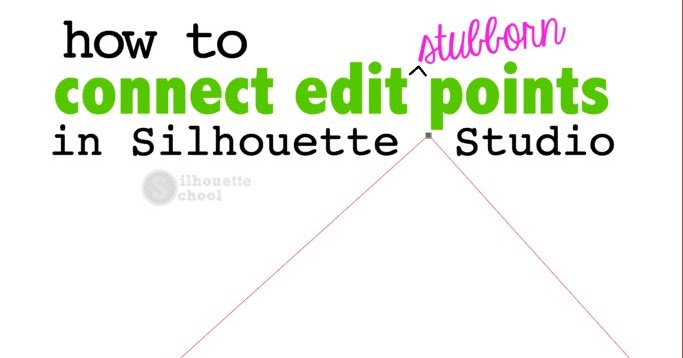 The easy fix for when you can't get Silhouette Studio to show you the edit points...and/or when the fill tool won't fill a design. It's caused by a break in the path...and this Silhouette Studio troubleshooting tutorial is how you're going to easily...

Im using Illustrator. These lines are ALL paths. Just like your example, I traced over-top a PDF plan, created my pieces and I’ve left areas where the pieces will remain on the sheet till I’m ready to assemble. (Standard procedure) Final art exported as SVG. imported into Glowforge and received the ERROR “Open Paths - unable to proceed”
I guess the overall question is - Does Glowforge cut paths - or cut shapes? Thanks for your help and assistance.

The GF only recognizes paths or bitmaps/raster.

I think it is probably down to software and process. The way I do my parts is to trace and create a closed path, i.e. a shape. If I’m using more than one shape I use a feature I think is called make compound path to connect them. I create the gaps to hold the part in the sheet in the last part of the process prior to cutting by using an eraser tool. Presumably that is not creating open paths even though it is making gaps in the walls of the shapes. Not sure if this is the ‘right’ way to do it but it works for me. Not sure of the process in Adobe as I don’t use it. Perhaps Object - path - join? One way or another you have to make sure you don’t have open paths.

Only paths can be cut.

I think it is probably down to software and process.

I agree. I just used Illustrator 23 to create this wing spar mockup:

Note the white fill areas, especially on the bottom one with the gaps. This would no doubt result in the open paths error. To remedy this, I selected the entire document and removed all fills by setting them to transparent. Here’s the result:

BTW, these are both SVG files, so you can right click on each of them in turn and save them to disk for loading in the GF app. It would be interesting to see if you still get the error with the bottom image – there were zero errors when I tried.

OTOH, I don’t use holding tabs when cutting parts like this - I use a temporary spray adhesive (Odif 505) on a piece of waste plywood to affix the balsa sheets. It’s enough to hold the parts in place long enough to keep them from blowing away, while still allowing me to easily remove them after the job finished. Might not work in your use case, but thought I’d mention it.

Yes. My SVGs are also transparent. No infill. That could be the issue.