I have a family friend who works at Scripps Institution of Oceanography and he had 2 different bathymetric maps of La Jolla Shores (one from the 1960s). I made 2D and 3D versions. 3D version was a lot of work to trace the image, make the layers and then cut it out.

(Feature Idea/Request: be able to create a workflow that lets you set up a bunch of layers in advance, so you can just stand at the laser, load materials, hit print, remove, load material, hit print,repeat…)

This was my rough draft/proof of concept, I plan to use nicer wood and make a box for it: 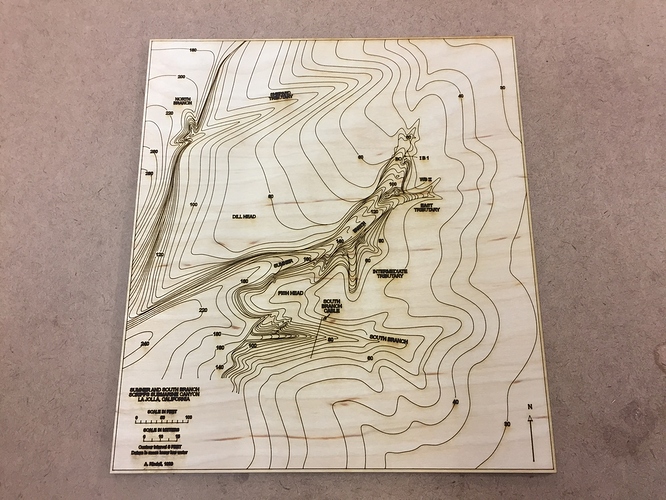 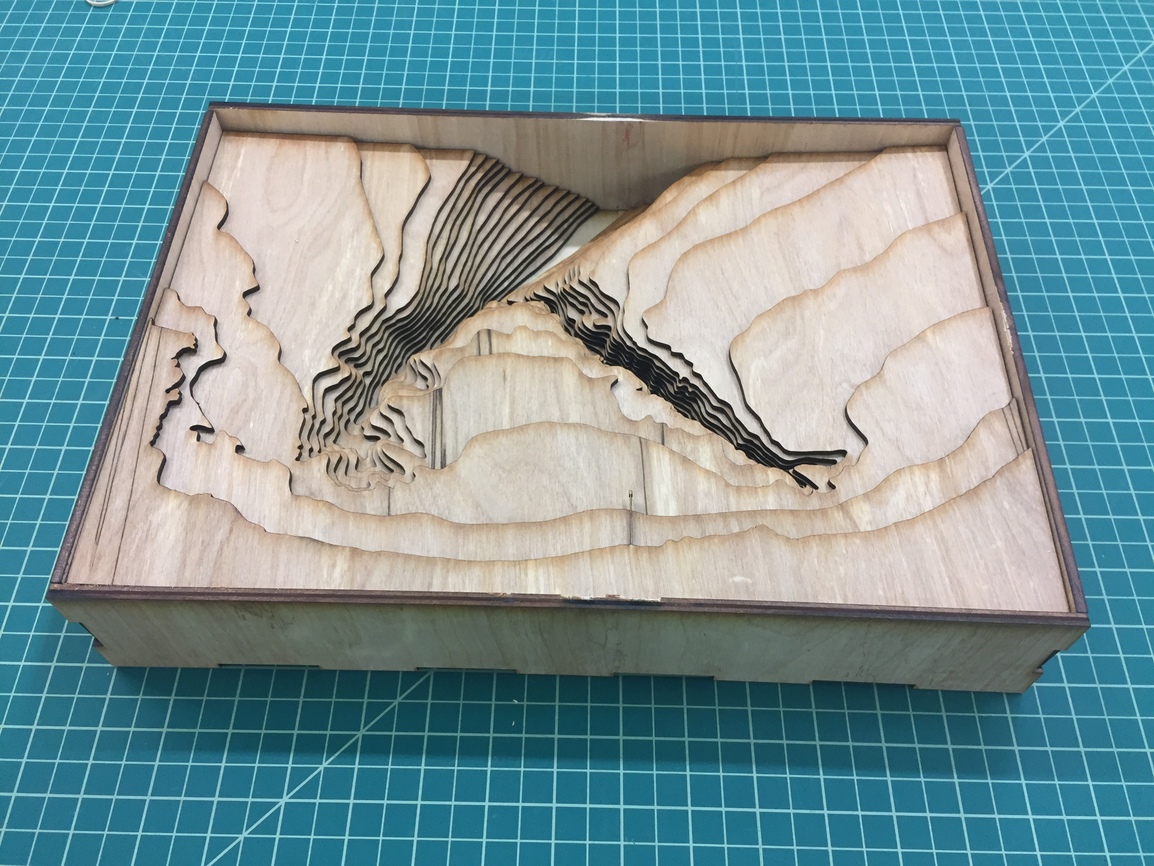 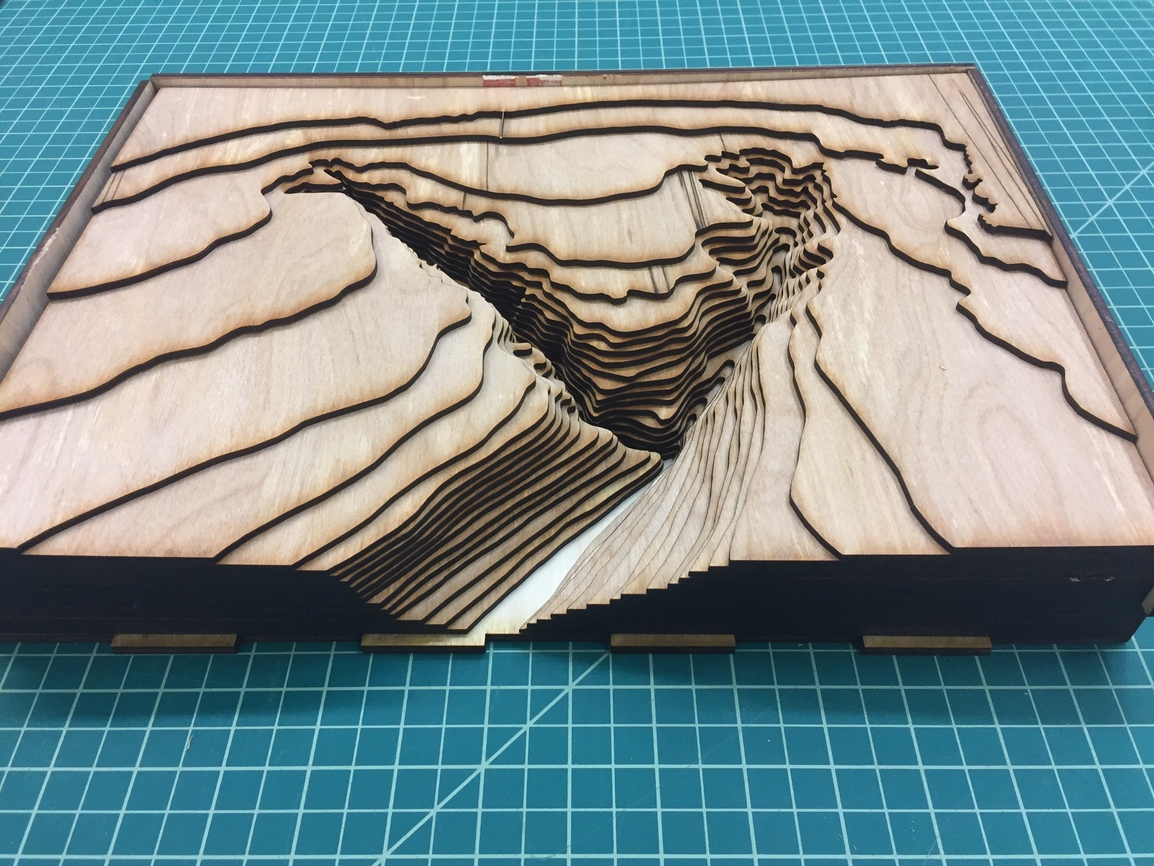 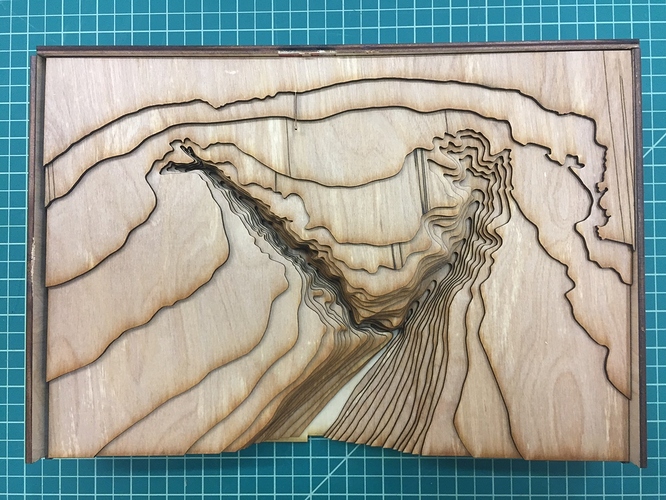 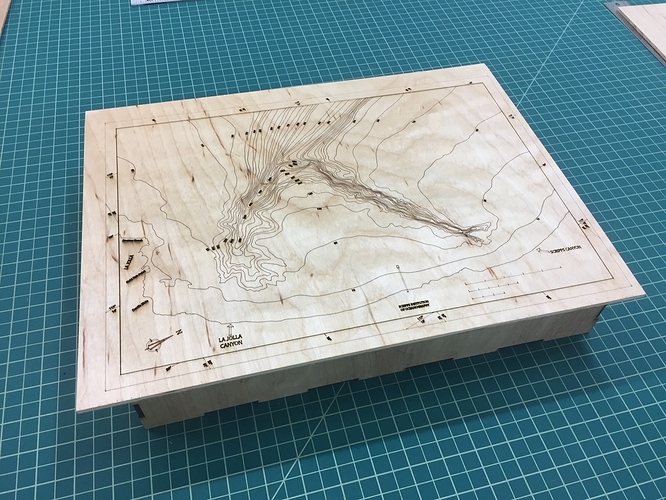 That is all kinds of awesome!

I forgot to mention that the model is to scale. In other words the 1/8" layers of plywood accurately represent each 50 foot depth curve with the size (scale) of the rest of the model. (Does that make sense?)

Stunning! The 3D version is breathtaking. If you add a surrounding box, you could replicate water with epoxy. Can’t wait to see the final version!

Wonderful! I, too, would like to see it with epoxy/water but maybe that isn’t practical if all of this is supposed to be under water.

(Feature Idea/Request: be able to create a workflow that lets you set up a bunch of layers in advance, so you can just stand at the laser, load materials, hit print, remove, load material, hit print,repeat…)

Actually, I think you could do this now using a jig and making each profile a different color.

This is beautiful. Lots of work, but well worth it!

The 2D could be the lid for the box. It would make a neat reveal when you lift it off.

That is gorgeous! Nice work!

Yeah. I was thinking the same thing and then leaving each layer separate (almost like a puzzle). So you could take each one out and look at a single layer.

Fantastic! This is going to be one of my first projects when my glowforge comes.

thanks for the awesome inspiration

One of my projects is to do this at coffee table size for my dad’s perch fishing spots. Let him move around the markers under glass of where he was sucecssful and when.

It’d also be a conversation starter and a reference too for his stories, it would give his tales an anchor to reality. He can point where on the table he was when a storm hit while he was reeling in the biggest pike of his life, show the direction of the storm and the path he took home to avoid transport ships while blinded in a downpour.

I should make a miniature of each of his past boats too.

I’d have to exagerate depth somehow as the St.Laurence isn’t deep, I was thinking of painting each slice a darker shade of blue or use a darker stain as it went down and add a legend in one of the corners.

These larger projects are why I got the pro, for the passthrough.

It’s awesome to see it the POC in reality, thanks.

Very cool. This is one type of idea that made me jump on this bandwagon.

Beautiful. I stumbled on this while searching for something totally unrelated. We have been to LaJolla Shores many times, love the area!