Behold! The Temple of Tiamat!

I run a Dungeons and Dragons campaign at work, and we’re working our way through the Rise of Tiamat. In the final encounter, the party must storm the Temple of Tiamat, a huge 5 sided tower in the middle of an extinct volcano to prevent the big bad guys from summoning Tiamat, the evil mother of all Dragons.

I’ll post the design eventually, but here it is a work in progress. I designed it completely by hand in Adobe Illustrator. It has 3 levels, the ground floor, the second level which contains the high priests who are channeling for the summons, and the center tower, which contains the big evil guy, and eventually Tiamat when she is summoned.

I’d looked into 3d printing this, but that would have taken about 10 days of constant printing on my 3d printer. Using the Glowforge, I was able to cut and assemble this to this point in an afternoon.

Later this week, I’ll glue it up and paint it glossy black to mimic obsidian. I’ll leave the roofs unglued so they can be removed, and the party can actually play through the building with their miniatures.

The hardest part was figuring out how to do all the tabs by hand for 5 sided boxes. 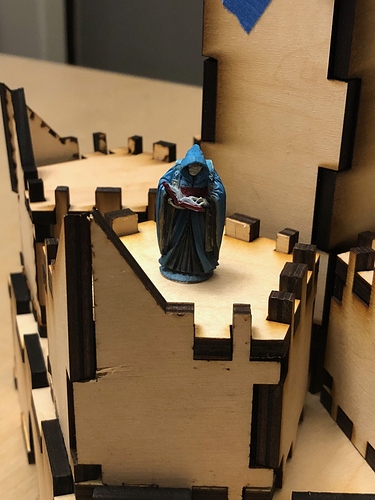 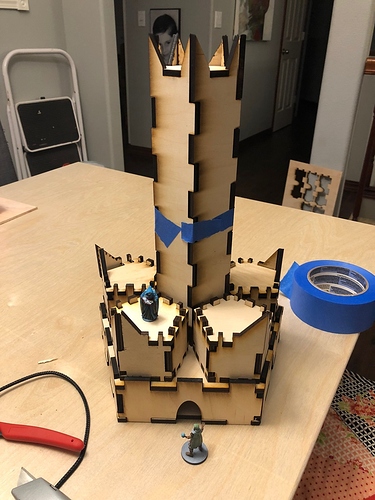 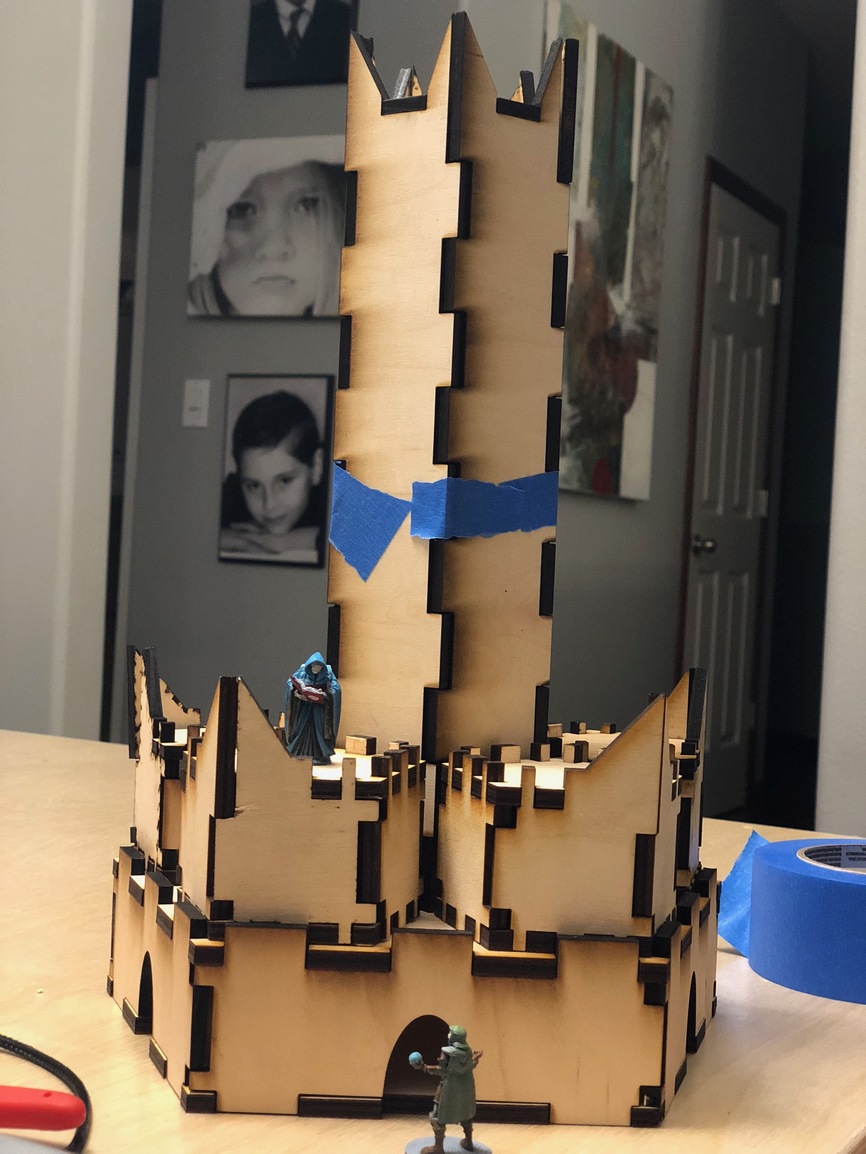 Very cool! Reminds me of the dark tower in LOTR (Barad-dur? I forget).

Great job. I will be looking forward to see the finished piece.

Excellent. Interesting your comment about 3D print. When I was trying to decide whether to get a GF the competition was a 3D printer. So I sat down and wrote a list of what I could make with each - the list for a laser cutter was about 10 times longer than the 3D printer.

Having got my GF I now strongly believe the design and build time is generally much quicker too.

Yeah, the main disadvantage of the GF is that it only works on flat stuff. But that said. for things like this, all I need is flat stuff.

I do plan to 3d print some dragon heads to mount on the sides of the tall tower before painting. Each tool has its uses.

Awesome! Do they pay you to play, as a “Team Building Exercise”?

So when do you make the volcano?

I love the blue tape of holding!

Hah, we actually do have it scheduled in the company calendar as “Team Building”

I run a Dungeons and Dragons campaign at work

Living the dream of everyone in prairie dog town! Even Imagineering at Disney such thinking would never have occurred.

If ever there was a place to use magic fingers as quions I would think this would be it. 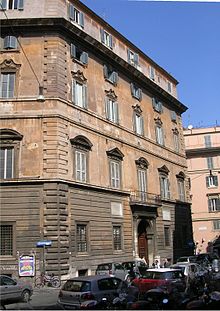 Quoins (/kɔɪn/ or /kwɔɪn/) are masonry blocks at the corner of a wall. They exist in some cases to provide actual strength for a wall made with inferior stone or rubble and in other cases to make a feature of a corner, giving an impression of permanence and strength, and reinforcing the onlooker's sense of a structure's presence. Stone quoins are used on stone or brick buildings. Brick quoins may appear on brick buildings, extruding from the facing brickwork in such a way as to give the appearan... 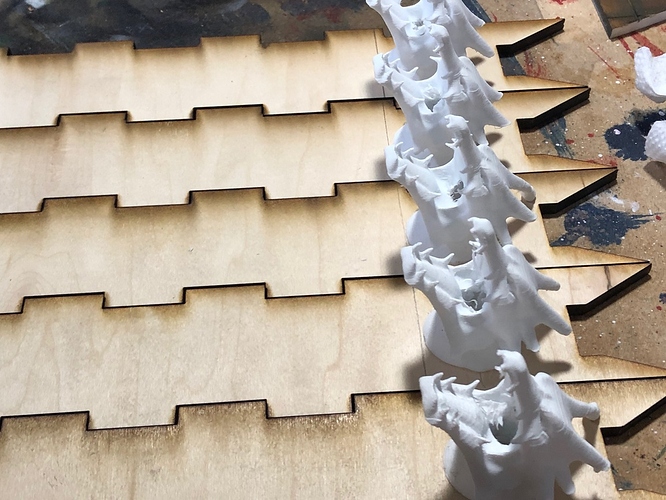 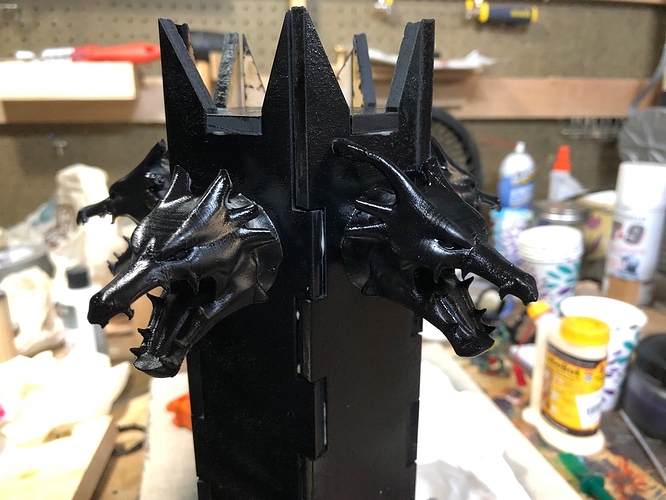 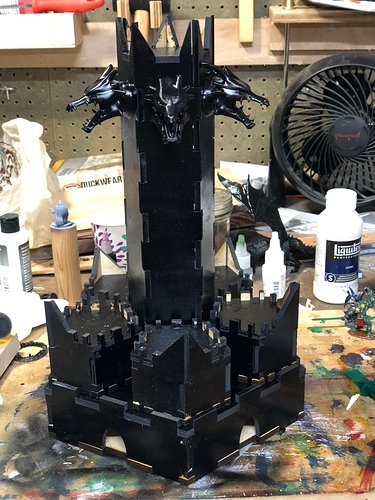 I love those dragon heads.!

You had me at “I run a Dungeons and Dragons campaign at work”.

I want to shrink myself and climb to the top of the temple.