Board Game (Work In Progress)

Been working on a 4X space game for oh… a few decades. This is like iteration 10 of it. But the first time I have all the tools at my disposal that I need to do it RIGHT. So… Laser cut white board… dye sublimation on the map pieces… 3d printing some game pieces… I may even make the damn box for it.

Base game map complete… More pieces shall be made to expand on it, but for now, 7 pieces will make for a game that I think should last 2-3 hours. Less can be used for a shorter game, and since each hex “rosette” can be moved and rearranged, there’s infinite possibilities for “scenario” type games as well. Want a game that will last a week? Drop a dozen more pieces around the outside edge of that. 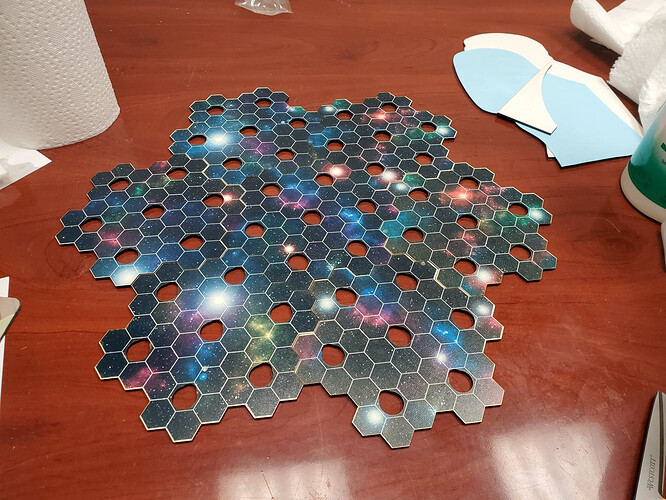 So… map done. Time to move on to planet chips. Then player progress boards. Then 3d modelling some ships and starbases and whatnot. Perhaps a giant space ameoba or two… Probably should put the rules down on paper and not keep them in my head as well. So… 5% done I would estimate.

Well, your star map is beautiful! Good luck with the giant ameobas!

(Not something you ever imagine yourself saying, really.)

I’ve published a three games now. You are probably right about the 5% there. Like the board. How the heck will you get any serious play-testing done when it takes 3 hours a go?

I am absolutely rooting for your success in 30 years. Love love love the coloring!

Game development is no easy task and I’m always impressed when people give it a go. I’ve play tested for a few companies now and worked as a teacher of games for a couple now as well. It’s always impressive what comes from the minds of gamers. Good luck!

How the heck will you get any serious play-testing done when it takes 3 hours a go?

I am also a programmer and have written simulation software for balance testing. Of course that never takes into account the human factor, but you can take the board all the way down to a single hex “rosette” and play a game that will probably last closer to 10-15 minutes. Just not a lot of strategy in that one. The bigger the map the more you have to worry about stretching your resources thin as you try to explore, expand, exploit and exterminate.

Creating starfields with colored dust is pretty easy in photoshop. I created a half dozen similar starfields and only made one mistake where it won’t easily match up when you put another map piece next to it. The one in the middle left has a rather large white star real close to the edge and that unfortunately is going to look a little bad when another is placed next to it. But I’ll worry about that later.

Game development is no easy task and I’m always impressed when people give it a go.

I’ve wanted to make a board game version of an old computer game Master of Orion for literally decades. I’ve given it a go since then in various different methods. First one was pretty close to the computer game but was a BEAR to keep track of and didn’t allow for any sort of tech tree. You had a ton of ships on the board at any one time and what you got is what you used. There were no upgrades. Since then I’ve deviated quite a bit from the computer game (though I threw that giant amoeba in there to see if anyone recognized where that reference came from) and it’s pretty much nothing like it any more. But it’s become both more complex and a lot easier to play. It’s always been for my own enjoyment (and that of my friends who’ve played it over the years). But this one… this one I think I might try to market if the testing goes as well as I believe it will.

It’s gorgeous! To me it looks like you made a honeycomb frame and filled it with glitter-filled resin. I guess that’s the quality of the sublimation printing kicking in.

They published a Master of Orion board game a few years ago! I’ve yet to play it, but I too love that old computer game.

I’ve yet to play it, but I too love that old computer game.

Still the best space 4X far as I’m concerned. MoO2 was good. MoO3 was junk… But the first one… perfect.

Planet chips created (well… about 1/3rd of them anyway)… After planets I was going to 3d print ships, starbases, and ownership tokens, but I think ships at least will be laser cut and sublimated as well. 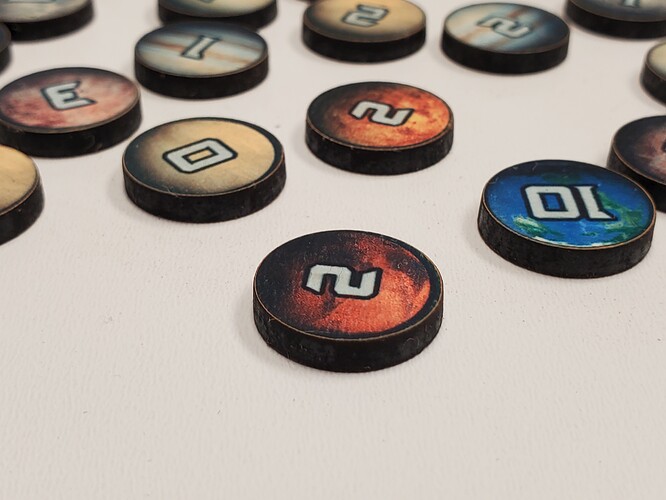 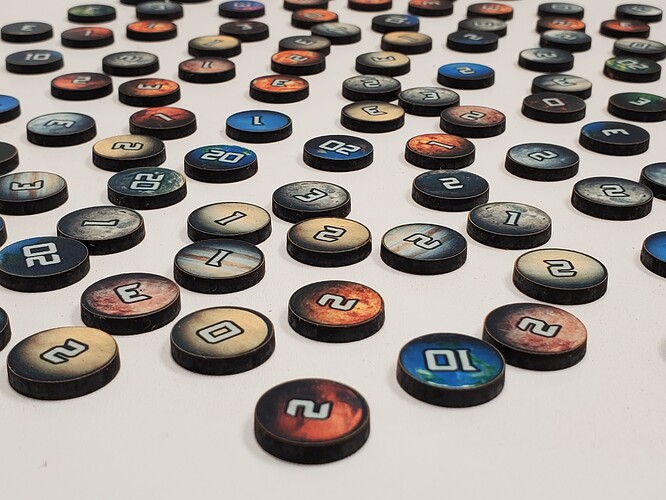