Has anyone used something like this - http://boxdesigner.connectionlab.org/ - to generate a box design? Any other tools like this out there?

I have used that one. Here is one, and here is another.

I have had good success with this inkscape plugin.
Tabbed Box Plugin
You have to experimentally determine the kerf setting to get a good fit.

I used this just yesterday, was quite happy with the results.

I have been using the boxes.py one to make some boxes successfully. Using 0.006 for the burn correction, and 3.2mm for the material thickness with PG hardwoods. Makes a snug fit, the boxes hold themselves together pretty well.

Also made a few with some 3mm Baltic Birch plywood I got from Amazon. Used the same 0.006 burn correction value, but 3mm for the material thickness. Makes a slightly less snug fit, but little dabs of glue in a few places hold them together fine. Could probably use a bigger burn correction (say 0.01 or 0.008) to get a tighter fit on these.

Below is one with the Baltic Birch plywood, using the stackable option and the flat top lid option, Still needs to be cleaned up more. 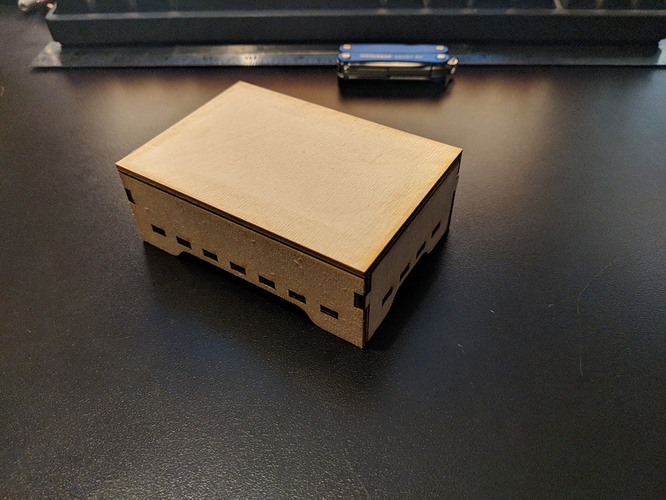 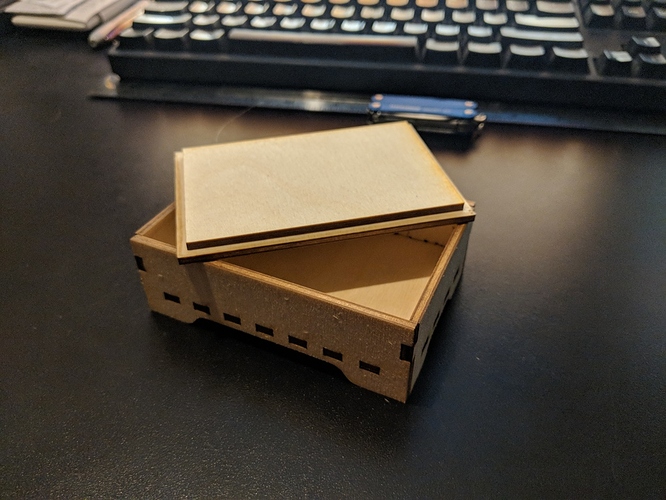 Awesome, thanks for the replies and examples. Looks like I have something to experiment with to get started on a box

Here’s the same box in PG medium walnut hardwood with an acrylic inlay (sort of, since it sticks up) on the top. 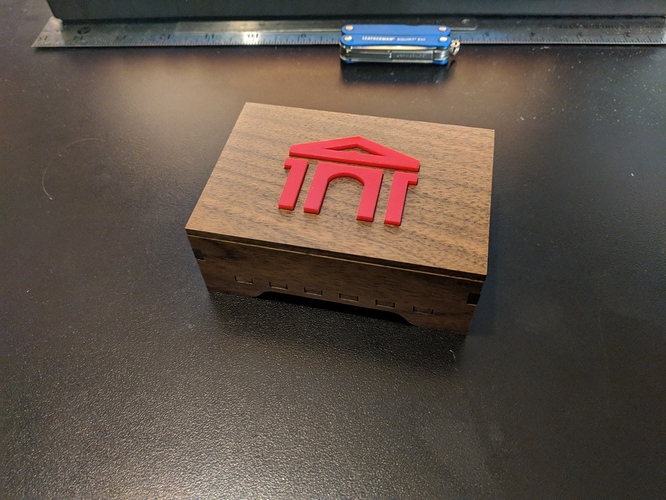 The “inlay” was done by engraving the top with the logo (full black with the new SD graphic setting cut about 1.5mm deep), then cut the same logo in PG medium red acrylic and fit that into the engrave.

I had been using the tool at http://boxdesigner.connectionlab.org/ and was dissatisfied for a couple of reasons, so I fixed it and the operator of the site just accepted my changes and reposted it.

It now can generate an SVG file directly, which is handy, and it also now generates the box outlines as closed curves so that you can easily move and select them in the Glowforge UI.

As before, it still can create boxes with or without a top, and it can adjust for the laser kerf.

I wanted everyone here to know that the tool is now better and has been meeting my needs rather usefully.

That’s great! Thanks for updating it…the links in the Matrix should still be good.

That URL seems to be down right now. Is the code available somewhere to run oneself?

It seems to be up now.

But my fork of the code is here. You need Python and flask.