They actually sell those. 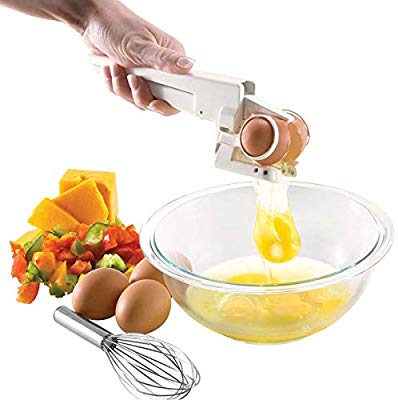 Huh. I’d never seen one before!

I don’t think they work real well…i first saw them on one of those Youtube vids where various guys debunk various products. (I think they make a mess more often than not.)

Then again, the wife gets dainty on me at weird times, so not showing her this.

Mess cooking in the Navy, I used to fill a gallon pitcher with eggs, one in each hand, cracked on the pitcher edge. Only took about 10 before you were a pro at it.

He’s got toast on the plate, but then cuts the yolk in half with a knife… don’t think I want egg advice from him.

Wait, you’re not supposed to cut them with a knife? How else do you get to the dipping part?

Someone needs to set some music to that!

Snort! Or I need to turn the volume up on the speakers!

@Jules if you’re like me (age wise) turn the volume up. Not too loud though

I had them cranked all the way off late last night to keep from waking up hubs. (He had an early meeting this am.)

And of course promptly forgot I’d done it.