Business... made on a Glowforge!

So this topic has come up a couple of times. After all the reading, here and other places, I still left very unsure of how to proceed. This is going to be the spot where I vomit (via keyboard) my experience so far. Tips appreciated and feel free to ask any question you please.

Step one: Open an account at my credit union to separate business expenses out so I don’t spend my life savings playing around with a laser. UBI (Unified Business Identifier) required to open the account as a sole proprieter.

Step one: Register my business with the State of Washington to get a UBI number.

Step two: Open a business account at my credit union.

Step four: Prepare to accept payments in as many was as practical. Got a merchant account through a place my credit union pointed me to. Not square or the other one. Instead of a little thing that goes into your phone’s headphone jack, the reader is Bluetooth and accepts chips. Pretty slick and customers seem to me to see it as “classier.” Easy enough to use, too.

Step five: Find a place to sell some stuff. I’m starting out by selling things in person. Working on a website, which would have been great to hand out in person. But the priority ended up being able to “dip my toe” in the business water. Got a hold of a place doing a German-themed market in a historic mansion. They took my money and gave me a spot.

Step six: Make some stuff to sell. As it is the holiday season, I chose to make a selection of ornaments. Came up with a handful of ideas. A couple failed either because I couldn’t get the quality I wanted or the laser time was too high or painting took to long or… anyway. I think I had maybe six or eight ready-made ornaments and a couple of wooden boxes.

Step seven: Get ready to sell some stuff. I watched this great video on preparing to show up at a market. @makesomething from right here on the forums made it! https://youtu.be/WBnWlc6UDb4 I wasn’t able to follow as many suggestions that he had as I’d have liked to, but boy did it bring the PANIC AND TERROR AND WHAT DO I DO! level from a 10 to about an 8 and a half. Also, the custom order form was a tremendous suggestion he gave. I had what was really more semi-custom. People could get their names or what have you cut into an oval ornament with a snowflake scored on it and the year. I also lasered up some displays and ordered a fitted tablecloth to get to looking more presentable. Oh, and little bags and tissue package purchases and send customers on their way with.

Step eight: Sell some stuff. I showed up at the market still peeling masking and tying ribbons to the ornaments even though I was up 'till 2AM trying to finalize as much as I could. Once I set up and realized that things didn’t look embarrassing, that panic level went down a bit more. Then they opened the doors and people bought stuff. I had talked to my brother about business. He’s run a couple. As his experience is in restaurants, we talked about steaks and fries. I won’t go too much into it, but basically for this event ready made ornaments were my fries, which I sold a ton of. Semi-custom ones were steaks, which I sold a few. Let me tell you, though: one thing that I did not foresee is how personal a custom ornament could be for folks. There was one guy, who on his second time by stood in front of the order forms wrestling with pulling the trigger on getting an ornament for what would be his first niece before he went for it. It was sooo important to him that he get just the right thing for her. Another custom order was from a couple who had a baby before Christmas 2016 which they lost some time after. They asked for it to have the baby’s name, 2016, baby’s first Christmas, and an anchor as that was special to them. The husband was there fighting back tears! So was I. I thought I made a faux pas by asking more about it, but they actually seemed to appreciate being able to talk.

This photo isn’t from that market. I’m doing another one tomorrow that called for a smaller table. It’s just sort of what it looked like and shows examples of what I was selling. I’ll be printing up a few event-specific ornaments as they sold well at the last one. Well enough that there are none left to put on this table. 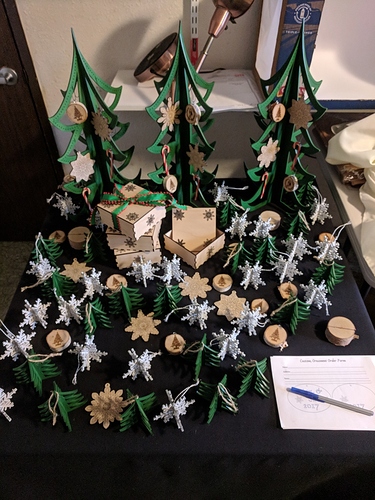 One last note: the “trace” feature was quite useful in positioning these engravings on irregularly sized birch rounds. Traced them in pencil as to not mark on them. Went over the pencil with Sharpie, being sure there were no lighter spots that might not be seen well by the 'forge. Put the cardboard in the machine. Traced. Placed. Set the engrave to ignore. Removed the cutouts and inserted the birch. With the trace design still loaded and not moved, add the tree artwork. Use the traced cut line to position the artwork ignoring the photo from the machine (for now.) Set the trace cut line to ignore. Engrave the tree. 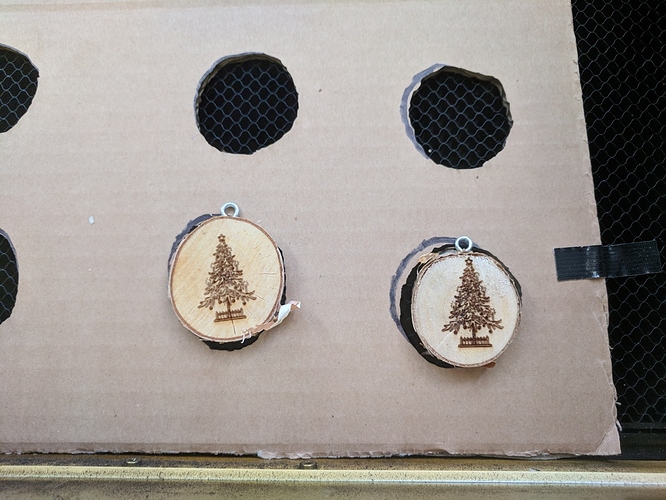 Another custom order was from a couple who had a baby before Christmas 2016 which they lost some time after. They asked for it to have the baby’s name, 2016, baby’s first Christmas, and an anchor as that was special to them. The husband was there fighting back tears! So was I. I thought I made a faux pas by asking more about it, but they actually seemed to appreciate being able to talk.

And that’s something (getting a very special token for that lost child) that could never have happened for that couple were it not for you. We touch people in profound ways every day and sometimes we see it happen in front of our eyes.

Glad you were there for them.

Way to go! And great illustration of the steps you went through and lessons learned up to this point! Just getting it set up can feel like a fiasco at times.

Bookmarked to come back to when I have more time to carefully read it and perhaps add something to the topic.

What a great story, @scatterbrains! I loved reading your step by step. I would certainly have been out of my own comfort zone in a few of those steps to success, but it sounds as if it’s all going to pay off for you. Great job!

Wait, what? We can do that?

Wow, that’s uplifting and heartbreaking at the same time. Hope it continues to grow for you.

Love your story! Look into Etsy or Storenvy if you want to ease into selling online. I started there for my prints and illustrations with the intention of developing a stand alone website. 10 years later…i yet to create the website because the time and cost to run that is higher then fees paid to Etsy. And I have 4 Etsy stores. (Soon to be 5)

I’m in a similar boat as you (trying to plan on being at a farmer’s market type deal in a week and half!).

Glad to hear that it’s been working and that you have had success!

I appreciate you sharing your experiences, as I’m embarking on the same journey. I have already started to make use of the death fabric

I will proudly hang those awesome ornaments on my tree this year, thank you so much! Sorry our meeting was so short!

Another custom order was from a couple who had a baby before Christmas 2016 which they lost some time after. They asked for it to have the baby’s name, 2016, baby’s first Christmas, and an anchor as that was special to them.

Our daughter was stillborn on Christmas Eve 2015 and last Christmas a friend of ours made us an ornament with our daughter’s name on it. You have no idea how much that ornament will mean to them for the rest of their lives. Nor will they ever forget you caring enough to ask about him/her.

This thread is very timely, too. Wednesday night I got invited to my first popup shop…a week from tomorrow. Time to get busy!

I have spent many years making and selling artwork, even doing 3d printing before there were personal computers and one early lesson was that displaying and waiting for folk to come by is as much as making it in the first place. I also learned that I was very bad at that part.

What I ended up doing, was to find shops that sold the kind of stuff I made and sell to them. They will expect half or less of retail but the volume you can sell will be a hundred times more if you find shops over a wide area, with no more than one in any particular town, or area. They will have existing walk-in trade so your work will have a very wide audience.

The more difficult part, in that case, is keeping track of them, and who has sold what and of course that they pay the bills. By quickly replacing anything that is sold, your best customers will remain so, Many will want “consignment” and that is ok up to a point, they should pay more, and they need more careful watching and communication, some will do great, some nothing at all and you may need to retrieve your stuff and find someplace in that town.

There is a deeper level when you are prepared for it of the merchandise mart you will need to find a dealer (there will be many) that wants to work with local artists, and they too will need a percentage, but they are like a shop on steroids, in that they will have personal relationships with as many shops as a shop has individual customers, and they will be most interested that you produce and deliver what they sell in a timely and quality manner. At what point you want it to be a hobby and not a hard job is another matter, but you could sell enough that way to pay for both time and Glowforge. These things I did before there was internet and that is another point others have made. Along with Etsy and such, you might look to Facebook as they now have pages for folks selling things from yard sale to cars, and for a bit, you can announce your stuff there without making it commercial. there is also this site that would be a good place in any case as it is an extremely localized “Facebook” and better for being a part of your neighborhood by far. 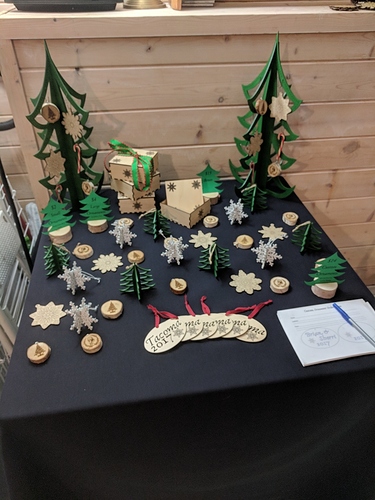 The little 3D trees are so cute!

Thank you for walking us through the end-to-end process and for taking the time to go into detail. This is one of the best posts that I’be seen on the forums!

That is so wonderful!

Well we need your entrepreneur story next obviously! That’s fantastic.

Haha, I may have 4 stores but I still have my day job