Saw a cool video of a guy making buttons, and it made me realize how simple it is to do so. I got a little more money than I was expecting to, so I ordered my own button press! Got the basics down(really simple as long as you don’t forget a step…like 5 times and think you already broke it

) and threw my logo into a button.

I printed my logo a few times to get the feel for it, and thought it would be a cool idea if I made thank you buttons to go out with my orders. I have this cardstock that shimmers and found out I can print 35 buttons blanks on that. What I wasn’t looking forward to was cutting that paper out, that is, until I realized I’ve got a decent amount experience in cutting paper with my GF.

I set my design up in illustrator, easy to both print on my regular printer and the laser, then went to work. Printed it out on the cardstock, uploaded the same file to the GF, cut a jig, put the paper in, then set my settings. I tweaked my previous settings, which I shouldn’t have done since my original ones were already perfect, and had pieces flying throughout the laser 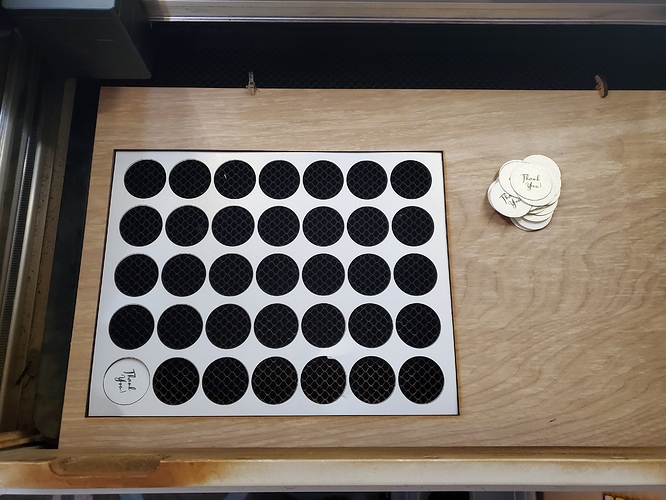 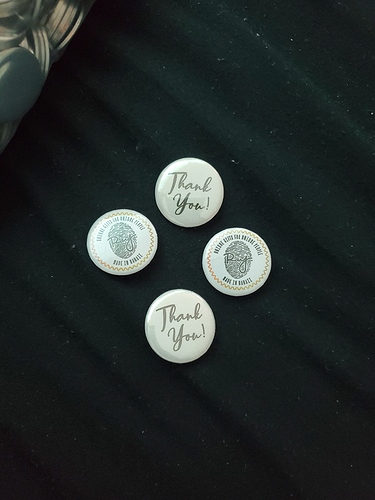 My wife wanted to make a button, but didn’t press down hard enough, resulting in an incomplete seal. As I finished up with the other buttons, I was looking at the one messed up button, and wondered what it would look like without the plastic covering, and wow, I’m glad that we had this mess up. 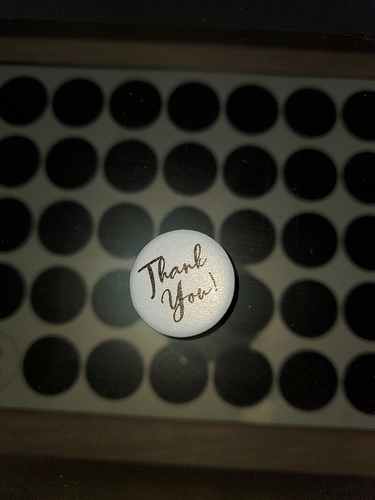 The paper has a really nice shine to it without the plastic later, so I’ll have to figure out how durable these ones are. I don’t imagine people will use the buttons I’m sending very much, so the cardstock buttons without the plastic protection may be a good route, but yeah, I can’t speak to the longevity of them.

Bonus image, you can kind of see what my camera offset is in this. It’s not as bad if I set the focus, this was an afterthought image when the machine was offline, but still. 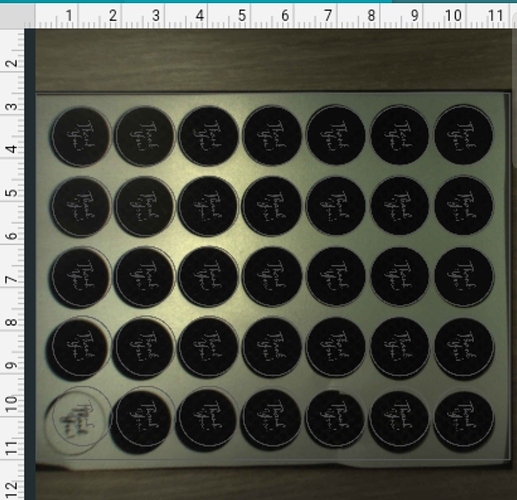 These are very cool! Even without a pin on the back, they would be a cool little tchotchke to throw into your order packages. They’d be like a little poker chip kind of thank you.

Based on the title, I thought shirt buttons, and couldn’t figure out why you wanted to make them. I mean sure, you need buttons, but you can buy them at joann’s so seemed overkill…

you can buy them at joann’s so seemed overkill…

I would lay odds that you could not buy buttons that were deeply carved walnut flowers. or many other possibilities such as these… 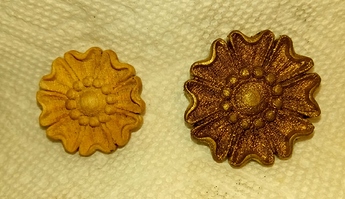 I would lay odds that you could buy buttons that were deeply carved walnut flowers. or many other possibilities such as these

I would hazard a guess that a 3D printer is a way better way to make those deeply textured shapes, although the laser would be the only way to do it with ‘real wood’ other than CNC milling. I’ve found that the layered wood is somehow not as strong after, and buttons have a habit of cracking at the hub where the thread goes through if they are brittle already…

I inherited my mother’s sewing stuff and she did have a collection of such buttons. In the case of porcelain, or a set made from coconut shell, had metal backs, and this was before CA glue, which I think would be the way to go if there was a concern about strength.

The porcelain ones were amazing detailed enameled dragons that she never had the ability to use as was the case with all that were still in the collection. Many that were very nice made their way to stuff she made.

The porcelain ones were amazing detailed enameled dragons that she never had the ability to use as was the case with all that were still in the collection.

My form 3 can print in ceramic as well (since I don’t own a ceramic Kiln I have no way to play with that, but it looks cool)

(and helpful that if somehow you end up in a 1000C fire, at least your buttons are safe!)

I don’t own a ceramic Kiln

Wow. I paid $100 for my oven that I had to leave behind when I moved last but are now 10 times that, but probably worth it if you had the 3D printer to go with it,
https://contenti.com/jewelry-casting-supplies/burnout-ovens/paragon-sc-2-metal-clay-kiln

Wow, that’s not cheap. Also I think Formlabs says it has to be vented since there is a burnout of the binder

Growing up we had to help my Dad when work had events. Credit Unions always had limited budgets, so he came up with this: Badgeaminit and we (5, then 7) kids ran production lines

Somewhere I still have it…

It was the hand press, I still have nightmares

The burnout of wax is not without fumes, so that ability or working in an open area that they can disperse is normal. If I could 3dprint and fire the result I would consider it the best use of the 3d printer and only printing metal more desirable.

The burnout of wax is not without fumes, so that ability or working in an open area that they can disperse is normal. If I could 3dprint and fire the result I would consider it the best use of the 3d printer and only printing metal more desirable.

Yeah, but burnout of paraffin is pretty benign (I mean walk into any church and a lot of paraffin is burning). I 3D print in paraffin on my FDM style printer and do lost-wax (well it’s not lost it ends up on the bottom of my oven…)

but burnout of paraffin is pretty benign

The fancy jeweler’s waxes are a very long way from paraffin. My favorite of all time was used hotter than most and if you dropped the piece it would bounce like a rubber ball.

This looks close but what I had came in triangular extrusions about an inch on a side that you could bend double and it would bounce back.

People love buttons, and these are going to be popular. The cardstock is brilliant.

These are fun! Another option is a magnet back rather than a pin. A great option for people who don’t wear pins and then you might end up front and center on the fridge.

front and center on the fridge.

Another option is a magnet back rather than a pin.

I just got in a bunch of tiny magnets 3 mm x 0.8 mm and do great on the back of those flowers either as jewelry or fridge magnets