A friend was making this string-and-candy-cane Christmas Countdown for her home and asked me for any suggestions before she just copied it outright. Aside from suggesting that she tie some bights into the string to give loops to hang the candy canes so they wouldn’t all just fall to the center of the string as the weight normalized, it got me thinking. She has two children, you see. Does she tie the bights in pairs? Large enough to hold two candy canes? Oh wait, I have a laser! Can I do something more structured and reusable? 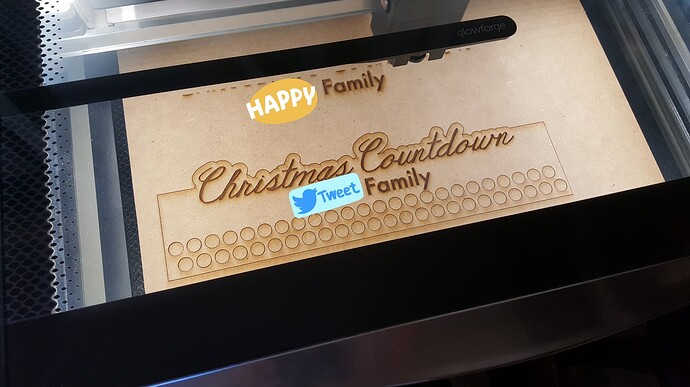 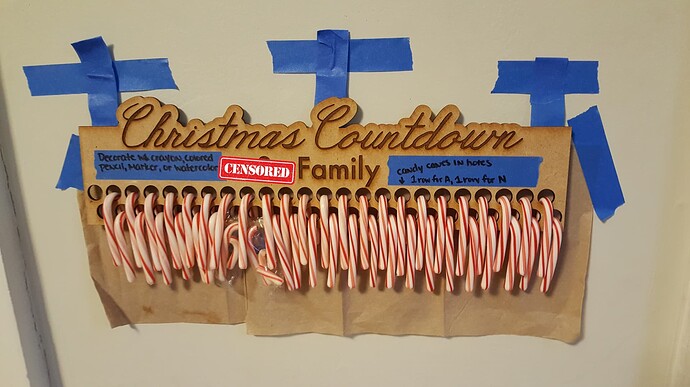 I put a row of 24 quarter inch holes (my best estimation of what a standard candy cane diameter is) for each child in the sibling pair, and then offset the holes so that the candy canes wouldn’t be competing with one another for space. In addition, I let The Small One have a say that, “Rectangles are boring,” and she wanted the top to be, “Bouncy.” So I used Inkscape and did an outside offset of the top text, 10 times (10x). In case you wanted to recreate this yourself with different top text or a different font, I’m giving you all the tools to do it!

The font was chosen by The Big One who said, “Christmas is really old. Make it an old font like cursive.” I was looking more at calligraphic fonts, but if she believes cursive is appropriate to the Christmas spirit, I’ll give it to her.

Under that we put the family’s name in sans-serif because I honestly couldn’t find a more decorative font that paired well with the cursive chosen for the top.

And finally, why is it a “Christmas countdown” and not an “Advent calendar”? Because Advent requires there to be four Sundays until Christmas and isn’t just a countdown from the first of December. And me being the trivia fiend that I am, I don’t want to set these children up to lose at trivia by giving them an incorrect association with the word. That’s my mission in life: build future trivia winners.

After proudly producing this countdown for my friend and her children, and then for another friend-family of theirs also with two children, someone pointed out that there are similar single-child countdowns available on Etsy for like $30 for the final product or $4 for the digital file. So with that in mind and given that this is a totally untested with full sized candy canes prototype, I’m releasing this under the share and share alike noncommercial license (attribution not necessary). Go buy from designers who actually spend more than 15 minutes designing something and don’t outsource key design choices to youngins if you want to earn some cash with your GlowForge; those designers deserve it.

Improvements I would make for a v 2.0:

I hope someone, somewhere can find this helpful.

And now, the moment you’ve all been waiting for: the file!

Edits were for typos.

Thanks for the file!!

Way to go for letting the kids have input.

Love the bouncy (and what a great way to describe it), it looks awesome with the candy canes in there!

I think the small one has a pretty good design sense! I’d add to round the corners a tidge, but I love this design! * Thinks about making a cat advent calendar… *

What I great idea!

I tried recreating a version using Cuttle. The could not get the alternating row to be centered. So in the case of multiple children, I thought you can just make two or more! Additionally you could choose different “flavors” for each child.

Here is an SVG sized for 3mm material.

I haven’t cut this one. Use at your own risk.

I also guessed at the dimensions, but it should be easy enough to modify in Cuttle.

A Cuttle project by Brian Wente

So, I went ahead and printed it out anyway. 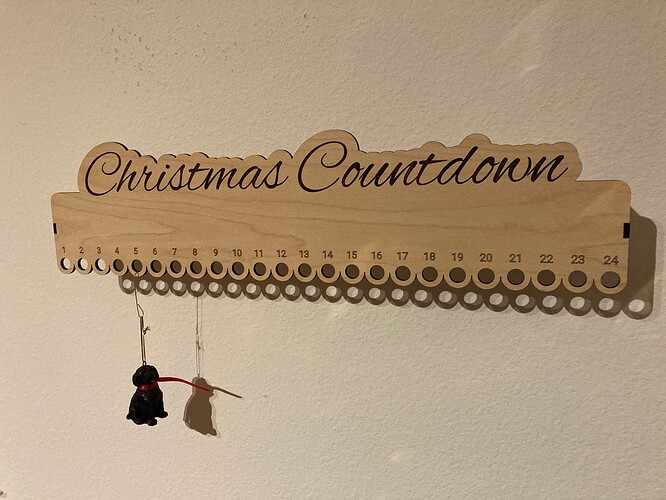 I didn’t have any candy canes, so a labrador ornament is standing in. 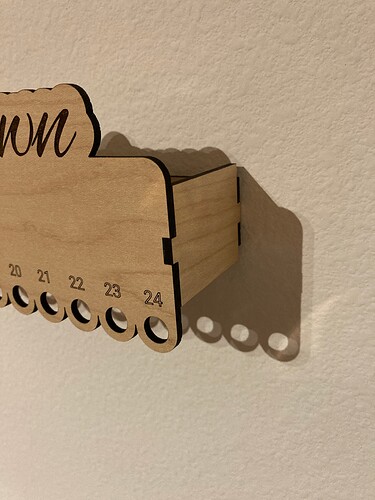 Out of likes … fun idea for Christmas.

I guessed correctly on the candy candy size! 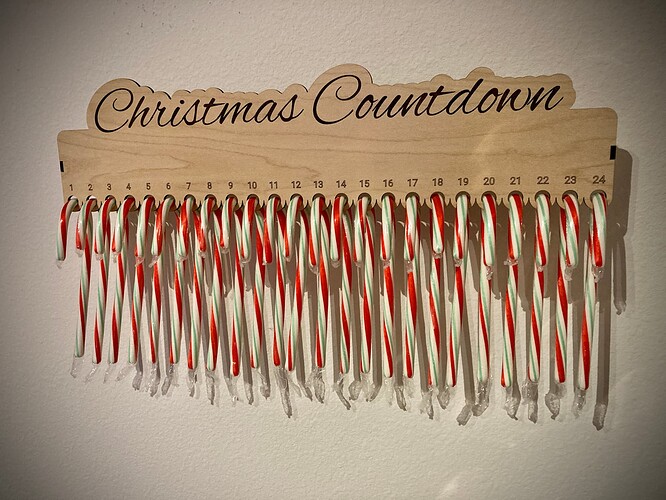 The mount still seems to fragile. I would make it larger and or double the material thickness.