Can't cut all the way through 1/8" baltic birch on 2 passes!

Hey Guys, I may have already figured out the issue, but I wanted to ask for other’s thoughts and advice and maybe to confirm our theories.

We’ve been having a lot of trouble lately cutting through our 1/8" baltic birch. It seemed to work for awhile, but maybe we got lucky with better pieces early on.

I’ve got the cut settings set to 155/full and set the height using digital calipers. We’d find a lot of stuff wouldn’t fully cutout, so we’d run another pass again, and still no progress, what the hell?

We are getting tired of using exacto knives to try and slice things up to finish the job. On our latest design we noticed a distinct lack of scorching mark around the edge of the circle (on the front of the board, not pictured), like it wasn’t even cutting, although it did at least score somewhat. We also investigated a triangle after having to exacto it out and noticed the fill in the middle layer was missing right where it kept failing to cut!

We assume it must do a cut through the first of the 3 layers, then fail if the center is missing and then even on a second pass it can’t focus or is tricked or something so it doesn’t cut through the final bits.

Are we just unlucky with bad wood and we stumbled onto the real issue, or is there something else we should be doing as well? It doesn’t seem like slower cuts make any difference.

You can see on the back of the design where it failed to cut.

Have you been able to read some of the troubleshooting steps for not cutting through? Here is a stock answer from Glowforge staff.

Two large cuts this weekend failed to cut all the way through, on proofrade medium maple plywood AND camera alignment issues Problems and Support

I’m sorry your print didn’t turn out beautifully, @tesla14alex! When a Glowforge unit doesn’t cut through Proofgrade material using default settings, the solution is usually one of the following: Your materials might not be lying flat, your unit might need repair or cleaning, or your design or settings might need attention. Unfortunately, I don’t know which one is right for you. I suggest the following steps to start: If the Crumb tray is mispositioned or holding bits of material from packagin…

And if not Proofgrade, then yes, some plywoods will definitely require more juice on occasion.

Have you tried to print the Gift of Good Measure on Proofgrade Draftboard for a base line?

Yep. You did indeed figure it out. Voids or dense glue plugs in the material are murder.

You can shine a strong flashlight through it and move it around to try to spot the voids, then just try to avoid them with the placement.

True Baltic Birch should be void-free by definition. Make sure you’re using the real thing and not regular birch plywood. It might have plugs, but definitely no voids. I cut a good amount of Baltic Birch and have very few problems.

I got a hold of what was supposed to be Baltic Birch and had this happen:
https://community.glowforge.com/uploads/short-url/4SRFmcrP3M0b9ZHRzzK5pQ4XTug.jpg

In that case there was pastic fill that was Laser proof.

That’s sketchy. It’s supposed to be birch all the way through. There could be glue for plugs, but that is not OK.

I’ve seen voids in every sheet of 1/4” Baltic birch that I’ve purchased from Woodcraft (ripped myself from 5x5’ sheets).

It’s in the very definition of baltic birch. If I got a piece with voids, you can be sure it would be going back.

You should have a discussion with them about that.

The standard that needs to be met is that Baltic Burch is made only from solid veneers of birch - no other filler woods or material is allowed. 1/4" is supposed to be 5 layers of birch veneer. (3 layers in 1/8" or 3mm).

There are other standard requirements for patches, pin knots and mineral streaks for the various grades of the faces but the core is not supposed to be anything other than solid sheets of 1 or 1.5mm Birch veneers with an exterior grade glue film. European cabinetmakers rely on this - a lot if it is not edge banded so the plies are exposed and voids would be an issue.

Oh, I agree. I know the spec and expectation. I contacted their customer support who said I had to go back to the store to resolve it. That was an hour plus, at the time, each way. Barely worth the gas. So I just won’t buy their products anymore.

I don’t know if those were bad batches, that their supplier is cutting corners, or what. Maybe it’s more prevalent because I was cutting into virtually every inch of it for puzzles, so I had better odds of finding them.

Not just you, I hit a bunch of voids in their stuff too. I was cutting plain old plywood at the time too though, or I should say “trying” to cut plain old plywood, and that was a factor of ten worse, so I just blew it off.

I figured you get what you pay for, and the Woodcraft stuff was the cheapest of the BB.

I figured you get what you pay for, and the Woodcraft stuff was the cheapest of the BB.

For structural stuff or if it’s going to get wet, I prefer BB because of the exterior glues used. PG’s MDF corecan soak up water.

If PG cuts clean; it’s the material. If it doesn’t cut clean, and you’ve done the lens cleaning, flattened it out, email support.

My thought is you don’t have actual Baltic Birch, but birch plywood sold by someone who doesn’t know better or does and doesn’t care. The only BB I’ve cut has always been 1/8" and the cuts have been 100% clean using the PG Maple Plywood settings. I’ve cut more 1/4" Menard’s plywood (more like 3/16) and do it on a single pass with settings that get through 99.8% of it. The pieces have all been fairly large, most requiring the pass through and three or four Snapmarks so the exacto knife to the last little bit hasn’t been an issue for me.

If it is not proofgrade, or true BB, I assume I either have to use settings that turn the edges to charcoal or live with some exacto work and sanding. This is less true the thinner the material. Not really an issue on 1/8" hardwoods. But move up to a 1/4 hardwood and the same board, with the same grain pattern, cuts clean with carefully discovered settings and then is a total waste the next time.

What I bought was “void free”. Unfortunately, the Bondo or whatever they used was quite laser proof, If I had been using some sort of bladed cutter I am sure it would have worked out well, much better than if there had been nothing.

The Proofgrade plywood is filled with MDF and while it cuts very evenly, I am not at all fond of the structural, nature, or resistance to dissolving back to the sawdust it was made from. Revolution Plywood is quite free of voids, inexpensive, and while it has its issues it will not dissolve into sawdust. Oak plywood is a bit more and has some filler it is not nearly so laser proof, it is very strong and looks good, though it makes a lot more dirty smoke than most things.

Oak also carves and engrave mush better than any other plywood I have used, 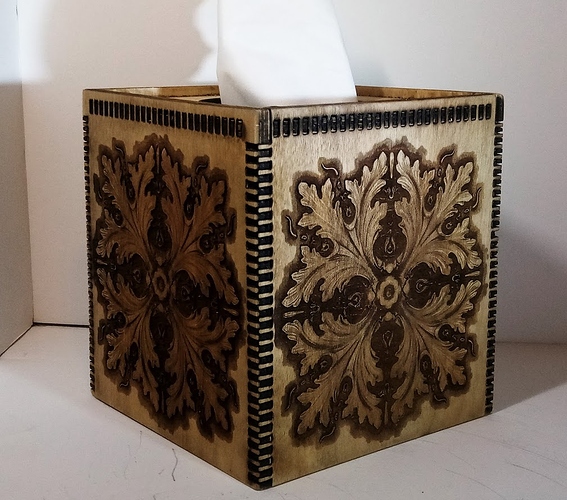 I have been testing birch plywood from a Finnish company. The surface is outstanding and they make the same thickness in different number of plies.
The exterior glue variants don’t laser cut well as the cut is heavily charred and
carbon wipes off. The interior glue cuts with a nice finish. I have only tried the 3 and 5 mm sizes with exterior glue. The main drawback with this material is that it is not generally available and they have a $300 minimum purchase.

Where did you get this? It looks very similar to the 1/4" birch plywood at Home Depot which is most definitely not baltic birch.

1/4" birch plywood at Home Depot which is most definitely not baltic birch.

yup on both counts, was the first I bought of anything #babe-in-woods