This may sound weird, I did a forum search but didn’t find anything. I normally soak my crumb tray to clean the gunk out of it. I was slammed over the holidays and haven’t had a chance to really get it cleaned. Is there any reason that anyone can think of that I couldn’t just take the crumb tray to a self serve car wash and power wash it out?? Not with their chemicals, I’d probably take my Simple Green spray bottle with me.

I don’t see why not,just make sure to dry it completely so that the iron parts don’t rust.

I always take it apart when I soak it so I can dry it so that was the plan. Thanks!

There are several places that there is no technical reason for cleanliness, though a laser tube full of gunk looks bad. To a degree the crumb tray is even more so that a very gunked up tray would not be a problem, It is iron for the magnets to work so rust could become an issue but everything else is plastic or stainless steel so I would not expect a problem as long as you are not using bleach or other such chemical that could bond, but drying it quickly and well I would guess to be the larger problem

It’s gotten to the point where some of the junk build up starts to smoke which worries me a little. And sometimes gets on my more delicate items and makes a mess. It’s just that when the crumb tray is clean I have to do less clean up on my projects coming out of it.

some of the junk build up starts to smoke

For reasons to see what the head fan was doing I created a large 1 pew engrave on a empty tray. It would certainly clean any area of the crumb tray that it passed over as well.

a large 1 pew engrave on a empty tray

Now there’s an idea … but it wouldn’t get the entire crumb tray? Most of it though. Interesting thought!

I’ve put down masking straight on the tray before to serve as a jig. Not necessarily recommending it as a full-time thing, but could be good in a pinch to cover a messy tray or preventative if doing something especially mess-making.

Way back in the day of silver crumb trays @karaelena disassembled his and soaked it in a simple green solution and it came out looking new.

Limited Edition if you please

I have not cleaned my crumb tray (other than dumping the crumbs out of it) since I got it. I’m only considering cleaning it now to maybe cut down on some of the smell from the many months of burning things. But still considering, not actually doing at this point

Limited Edition if you please

Yeah, it kind of hurt sending it back with the PRU they had loaned me.

Wish I had kept mine, the contrast helped visibility on the bed.

soaked it in a simple green solution

This is what I normally do but because I’ve been so busy I was looking for a faster alternative. I’m thinking spray it down with simple green, let it sit for an hour and then power wash.

I always take it apart when I soak it

I was going to ask about disassembly, but I feel like there was a post about this.

Pre-Release | Car Wash Made on a Glowforge

My glowforge had some mileage on it when I got it. Then I added even more mileage since I’ve owned it. The honeycomb has definitely seen some better days. Discamiler. THIS IS NOT THE OFFICIAL GUIDE ON HOW TO CLEAN THE BED. You do this and screw thing up. Shame on you. Okay then. Play this while reading this. Wait until the 50 sec point then start. This is what it looked like before I cleaned it. [image] This is the after. [image] Steps in-between. Fill a bucket with hot’ish water an…

yep this is the method I normally do. Just looking for a little bit faster turn around. 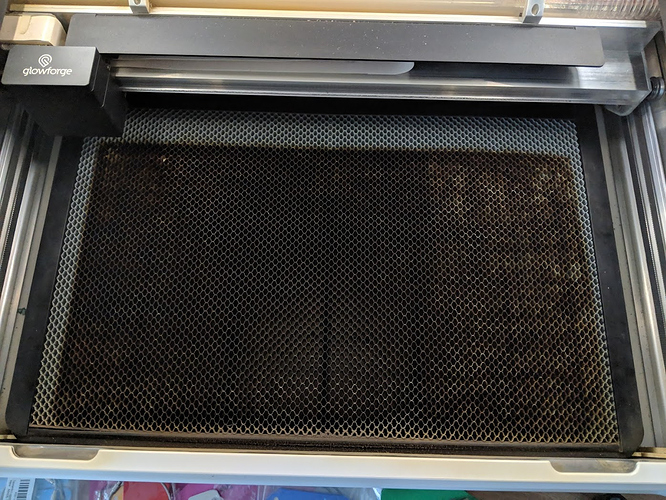 then how would I know where the edges are?

Magnets stick to the honeycomb pretty good, so it’s not made from high-grade stainless steel. It’ll rust. I don’t think it matters much how you clean it, it’s pretty robustly built and very little will attack the metal. I just took it out to my driveway and used my pressure washer. But since I used water, to avoid the risk of corrosion I blew it dry with compressed air when I was done. A hair dryer probably would have worked as well… A little rust isn’t going to hurt it either, I don’t think. It just looks crappy. Though who knows, maybe the laser will scour any rust. I remember seeing a video recently for a hand-held laser that did just that, taking the rust off metal, literally making it disappear instantly, no elbow grease required.

Don’t know how I missed that post, but it was AWESOME… And you definitely need to do the soundtrack with it!