Anyone read Japanese wellenough yo see it they sell plans? Guessing not, but still cool. 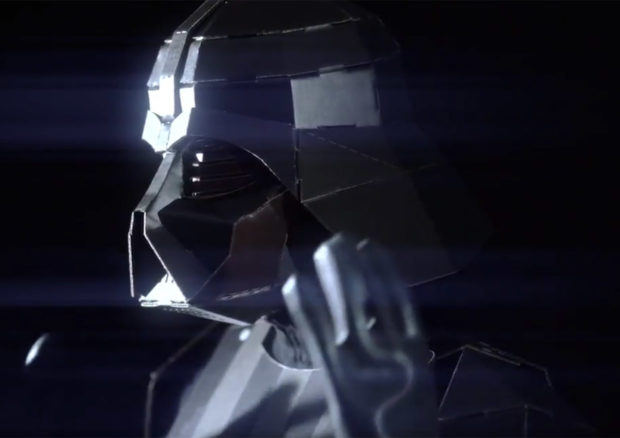 This Halloween, there's no need to spend a crazy amount of money on a Darth Vader costume. Anyway, it would just sit in the closet for the rest of the year...

Shouwa Note Co., Ltd. manufactures and sells various stationery including japonica learning book
(Headquarters: Takaoka City, Toyama Prefecture / Tokyo Headquarters: Chuo-ku, Tokyo, Representative Director: Shigeru Katagishi, hereinafter Shawa Note)
A wearable cardboard assembly kit under development “Wear it!” Cardboard Darth · Vader Hen "
I will announce it at Tokyo Toy Show 2018.
"I’ll get wet! Cardboard "series,
It is a corrugated cardboard kit that can be easily made without tools,
Provide an experience of playing after wearing it assembled,
As stationary stories that users can learn while enjoying
We started selling the series from the armor version of 2015.
Cardboard parts with pre-cut in
It can be created just by assembling it.
Because it is difficult to make a mistake with a guide number and it is colored,
It will not pollute the room.
Wave cut processing is performed to make the section irregular,
Even if rubbing it is becoming difficult to hurt your skin.
It is made of corrugated cardboard and its body is light so it is easy to handle,
Also, more than 90% are recycled,
It is very ecological.
Raise the global SF boom, regardless of sex to a wide range of age groups
“Star Wars” with fans.
It was opened to the 40th birthday of last year
“Star Wars / The Last Jedi”
World box office revenue exceeded 139 billion yen, from June 29 (Fri) in 2018
“Han Solo / Star Wars Story”
It was nationwide road show,
It is a movie work that continues to be loved for a long time by a wide generation,
From many users · media · circulation people
"I’ll get wet! We received a request for commercialization in the cardboard series.
Having the theme of communication and crafting “Wear it!” Even with cardboard
It has reached the idea that many people will enjoy it by showing its awareness and appeal and planning it.
Halloween and SNS have penetrated even in Japan
This product, together with the high affinity with both, is “pleasing joy to actually make with hands” of the work,
We developed it as a purpose of nurturing “real communication” by playing by playing.
Shouwa Note continues to support learning by planning and developing various stationery as an entrance of children’s curiosity.
It is exhibited at the showwave note booth.
"I’ll get wet! Cardboard Darth · Vader Hen "
I will present it at Tokyo Toy Show 2018.
Press Release June 6, 2018
SHOWA NO. Corporation
The picture is under supervision.
Actual product may differ slightly.
The picture is under supervision. Prohibited without permission
Actual product may differ slightly.
Prohibited without permission
Press Release
Darth · Vader model to the new series of ‘stationary stories’
This product, Walt Disney Japan Co., Ltd. and Mitsubishi Corporation
Based on the contract of ShoWa Note Co., Ltd., it manufactures and sells.
■ Product content
Product name “Wear it!” Cardboard Dozen-Vader edition "
Material corrugated cardboard (wave-cut hard to hurt hands), POM joint parts
Producer Japan
Release time Schedule of autumn January 2018
Suggested retail price 3,980 yen (excluding tax)
■ We prepared videos for product explanation:
https://youtu.be/ _ UkhL_xScA
Tokyo Toy Show in 2018
Please come and visit us.
I am waiting from the bottom of my heart.
■ Presentation Session June 7 - Thursday, June 8, 2018 (Fri) Business talks market
Saturday, June 9 - Sunday, June 10 Open to the public
■ Venue Tokyo Big Sight West 1 - 4 Hall 3-11-1 Ariake Koto Ward, Tokyo
Booth: Shohwa Note Co., Ltd. West 3 Hall No. 3 - 09 Booth
■ "I will put on! Cardboard "is
As stationary stories that you can learn while enjoying through real experiences of wearing
It began selling on November 25, 2015. The first one is for “children” Armor Sanada Yukimura "and
“Armor Date Masami” (2,480 yen each). The second succession is realized by a large number of requests from SNS etc.,
For adults “April Armor Sanada Yukimura edition for adults” and “Armor Date Masamune edited for adult” (2,980 yen each) released in April 2016.
Since then, we have developed a series of armor and others that are associated with characters and regions.
■ Inquiries concerning this press release:
Showa Note Co., Ltd. Customer consultation room
U R L http://www.showa-note.co.jp/
※ The product name, service name and company name as described,
It is a trademark or registered trademark of each company.

It will not pollute the room, and they are waiting from the bottom of their heart.

The picture is under supervison and it’s prohibited without permission.