I’m going to try both. I have what I think is the smallest turntable bearing, and it works but it’s a bit bulky. I’ve got a couple of others on order to try, but they won’t be here till February.

If you have some bearings or small beads around, you could engrave a groove and have a little makeshift lazy Susan for now. I had to repair my kid’s sit n spin toy and that’s basically all it is. Marbles in a groove with some kind of toothpaste looking lubricant.
Cool project btw.

In thinking about bearings how is it that you could not cut disks out of your smallest scrap and an eccentric hole to push (or lift) the poles up and down (another great place to use those thick bamboo barbecue skewers - I am getting a long list there) .

I would think that the Glowforge would be very good at engraving deep round raceway ruts at the various places you would want them and a series of parallel engraves perpendicular to a strip of wood might have the same effect as the living hinge cuts as long as you were not bending it multiple times.

It would be hard to avoid all metal in such a build but I would be trying.

Magnets… place magnets in even spaces around the base, place repelling magnets to those on the bottom of the poles. Allow play so the magnets can push against eachother and make the poles with horsies go up and down as they pass. If you place them at a repelling angle as well it’ll help the spin and not add to the jump from spot to spot since they’d be repelling against eachother.

Dunno, might be a thought a bit more glowforgy than trying to make a wavy base for the poles to ride up and down.

Actually tried that for the rotating part, and the magnets tended to jump to the farthest point away from the repelling magnets. (It was pretty funny actually, except for the cussing about having to dig all the magnets out.)

I have been playing with an idea and have a phase one ready for the Laser I do not have yet. It is the same idea as a living hinge with a slightly different direction of geometry. this is a very simple band that (i hope) will make a six-inch diameter circle an inch high. if finished and a strong rubber band wrapped to hold it and wood glue painted on the engraved compression side before final bending, then the compression side will be compressed together. I considered other fancy latching at the ends but then this is a testsix x1 inch round.zip (1.7 KB) @Jules

Actually, that’s not really a living hinge, but it looks like a technique that one of the guys discussed a while back, (think it was Paul), where removing enough of the material causes it to become flexible. It’s an alternative to a living hinge.

Let me see if I can find that experiment that he ran on it… (oh, yeah, I’m gooooood! )

Possible alternative to living hinge Beyond the Manual

My background is in woodworking,so I’ve been playing a little with a laser analog to kerfing for bending wood. With regular tools, you make a series of cuts almost through a piece of wood or plywood. The cuts weaken the wood, and the material removed by the cutting gives the inner edge of the piece room to have a shorter (partial) circumference than the outside. The cuts don’t go through, so it still looks like a solid piece. Problem with lasers is that the kerf is so small that you’d have to s…

Fantastic! Too bad there isn’t a way to put gears to use to make the horses go up and down. Great job! 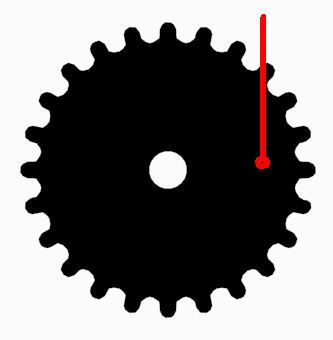 where removing enough of the material causes it to become flexible.

the big difference would be speed enough to not scorch the wood, but many more cuts and very narrow kerfs, as each cut would be less than one degree needed of bend you would be closing the kerfs and the small amount of glue would ideally make the back side sealed again. some of the more advanced ideas would be extremely strong and light if they would work. the big question would be getting 3/4 of the way through reliably without breaking through.

If the weight of the horse is too low for it to be pushed down by gravity a humpy slot approach could be used for the wheel or a peg to run in.

If you did a the same gearing on top so the horse would go in a slightly elliptical pattern reminiscent of galloping. Otherwise you’d need a pin on the end of your “horse lifter” shank thingy, to connect to the pole. Or the horse will rock instead of just rise.

Course we might just be over-engineering a thing by either point. Cause then you’ve got to scale everything up to eyespec, figure out how to make the axels turn when the whole carousel turns. Gears on gears and material tolerances.

I was trying to keep it simple by just throwing some magnets in the base with repelling magnets on the bottom of the poles. So when the poles went over the magnets it would force the poles up, and let them drop back down in spots there weren’t any. But as stated this has been tried, and failed to amusing results according to @Jules.

Someone might need to design one a little larger and go for it, cause it would be fun to see. (I’m out of Proofgrade.)

As I have noted a bit of bamboo stuck through the side of a gear will rise and fall in a sinusoidal wave if all you are looking at is the vertical motion, but as you point out there is also the same wave pattern 90 degrees off going side to side, and if the gear is travelling along a rack there is that motion as well. you could get only the up and down motions by letting the pin slide on any side to side motions, but then you get drag.

With the strips of Soda bottle plastic from this gadget you get a very low drag surface that is both strong and springy and can be used to only apply the vertical vector. There are several possible ways to do this. I would love to find that plastic in thin sheets that rings could be cut and even as the gears went round would provide only the vertical component of the movement

Very beautiful and great job! Looking to cut out some horses for my grand daughters birthday party. Very inspiring… hope I can do half as well as you did! thanks for sharing!

Beautifully done and can’t wait to see future reworks! I would love to do something similar in a creepy kind of Tim Burton skeleton horse style.

Your dining horse is also a nice touch

This post made me remember a wonderful software from the '80 that let you decorate and print paper models that you would build into working machines.

I actually built the carousel as a gift for my mother.

Maybe some of the templates can be adapted for laser cutting.

Great link! Never seen that site before…they should be easy enough to modify.

This is just awesome