Rush job for my step-daughter’s mom (her gift to her boyfriend who is really into DnD) as I only got the rough look and feel details a week before Christmas. had to juggle designing it (with learning Inkscape), working full time, a toddler and 7 month old! Ahh, the fun. He already had a felt bowl to capture the dice, so this one came without a fence. 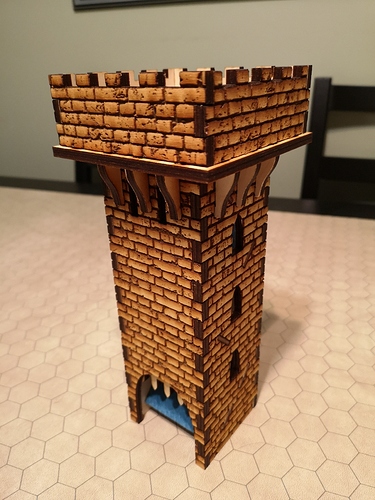 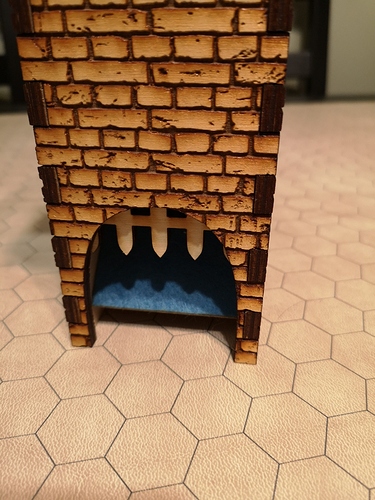 I’m pretty happy with the brick engraving, but my OCD tendencies want to work on the realism for everything else for version 2, such as:

Any suggestions on what other elements could make it more realistic? I don’t think I’m OCD enough to warrant the time and effort to better line up the brick engraving around the window cut outs…

Thanks! I figured I didn’t have enough time to do a really solid thorough design, so best to split my effort 50-50 between structure (necessary) and something “shiny” (the brickwork) to catch the eye and distract from all the rest.

Extreme OCD would have cut all the bricks individually and built a tower! LOL. Don’t be ashamed to go for detail. Very nice project.

The stonework looks really nice. It looks like there is enough depth that you could use acrylic craft paints on the whole thing.

There are a lot of videos out there on how to paint wargaming terrain. You could make v2 look amazing and it would be easier than you think.

(both easier to do, and means you won’t find a spot you accidentally missed!)

Consider Rub’n’Buff if the portcullis is supposed to be metal. It is meant to be shiny, but could probably be dulled.

It is meant to be shiny, but could probably be dulled.

You can control “shininess” with different amount of material and buffing. Practice on scraps of the target material first.

I love the bricks and the tower!

I used an acrylic from Johnson’s Plastics for an outdoor piece that may work well for this. it engraves black and has a stone look to it.https://www.jpplus.com/rowmark-the-naturals-aspen-grey-black-engraving-plastic

I know what to do for next year’s Christmas party now! 2 of my 6 co-workers are DnD people. I did this for one of them this year (obviously not GF): 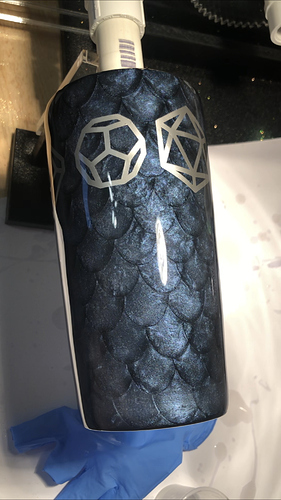 …but is the princess there or in another castle?

Fabulous, thanks so much for the instructions. I’ll add this to my (ever-growing - yay!) list of things to practice in my “spare” time.

Perfect, that sounds easier and quicker. Thanks!

That sounds promising. I’ve got lots of scraps. Thanks @eflyguy and @caribis2!

Ohhhh… that looks very promising, and the store actually ships to Canada! Now how to justify increasing my order to get free shipping (on orders $400+). Any other material recommendations from that site? I’ve got a new(ish) Glowforge and once my nanny starts in a month I’ll theoretically have more time on my hands…

That’s gorgeous, what did you use to make that??

I’d be happy to share the source file for the castle tower - will post v2 on here once I tidy it up and make some improvements. I did it in InkScape (easier/quicker learning curve) but I’m hoping to figure out Fusion 360 as I’m in love with parametric design (I’m a math nerd but have never used a CAD software).

I really want my next design project to be a full DnD DM screen that is functional, not just a privacy block. Would love to figure out a way to include planetary gears that is actually useful, after being inspired by @finh’s amazing Magic life tracker! If I can find someone or several DMs to solicit requirements (I hate designing something that isn’t actually practical/useful/good design) then I’ll post that and share it as well.

LOL my two year old was quite upset that her princess dolls couldn’t use the castle. She’s requested I make one whose floors aren’t broken (being slanted).

Thank you! It’s black card stock scales on a tumbler with 3 thin coats of epoxy. The first layer I added mica pigment… I was actually trying to make my own shift colors but it ended up gray blue which (Luckily) was fine because blue is her fav color.

I love the idea of the functional screen! That would be a big hit!