I made the Crystal Lip Balm Holder Keychain from the catalog but instead of the provided crystal score, I grabbed a line drawing of Darth Maul’s lightsaber and used that instead

Great design! Thanks @shronimo! I may whip up some of the mermaid tails for my nieces!

Oh man, that looks awesome! I admit, I like it better than my version! (And your stitching is much better too!)
Thanks so much for the tag and sharing your version!

I definitely like the richer design. The mermaid designs look great as well but it causes concern for the rest of the mermaid.

but it causes concern for the rest of the mermaid.

I don’t understand mermaids. If they were real, wouldn’t the back half be the human half and the top be the fish half? Humans can’t breathe water, yet a mermaid would have to be able to do that. It would be simpler to be a fish up front (breathing covered) because human legs can already paddle to propel one through the water.

I recall an old playboy magazine cartoon where two sailors observed the two options and had a short discussion about it, and I am sure the joke was long stale a thousand years before that.

As for swimming, human feet make pretty poor fins. I even recall a man who lost both legs at the knee and had fins made that went straight back, and was the fastest human in the water though he obviously could not walk with them. For land he had two thick pogo sticks that made him a sensation on the tennis courts, though he had to constantly bounce to maintain his balance.

As almost every critter that went back to the water dumped the hind feet in favor of a tail the test is fairly in, and even penguins and seals get most of their power by “flying” with their front appendages. The polar bear is the only sea critter I can think of that dog paddles.

I think the presumption that the top half is “human” and not a completely different species is where this falls off. Some mermaids have gills, some have breath holding abilities to rival dolphins, I’m sure there are a dozen other differences. They only outwardly look like humans so they can draw sailors to their doom!

The upside of your version is not having Disney breathing down your neck for copyright infringement! My personal use has no such limitations

The pre-waxed thread from Tandy leather is great for sewing leather - and I may have also pre-punched the holes with the laser…that makes it so much easier to keep a straight line!

Being shared with her permission for your uh…entertainment… 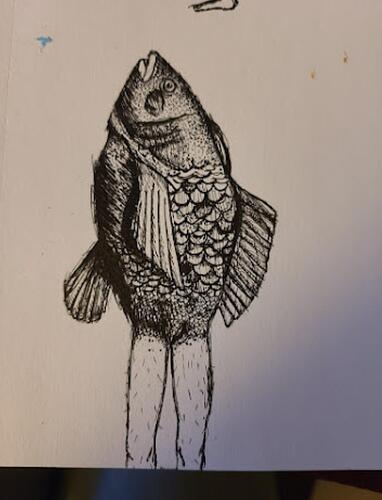 I love this thread! hahaha!

Nor can any other aquatic mammal, but we have dolphins, whales, seals, etc. And with the exception of Kevin Costner, mammals don’t have gills, but whales (the deepest of them gets closed to 10,000’ depth with times > 60 minutes) seem to do just fine.

Nor can any other aquatic mammal

Or any other warm-blooded animal as the oxygen need exceeds the availability. I have heard of artificial “gills” you wear like a backpack, but have never seen any evidence beyond talk.

I have heard of artificial “gills” you wear like a backpack, but have never seen any evidence beyond talk.

One of my classmates in medical school was a former SEAL and he was one of the test subjects (he was volunteered) for that oxygenated perfluorocarbons that you see Ed Harris use in the Abyss. They basically strapped him down to a table and using a dual lumen endotracheal tube shut off one lung and filled the other with that stuff. And while physiologically he was able to fully perform gas exchange his brain could not deal with basically drowning, even if he wasn’t actually drowning. But that would allow the ability to gas exchange via liquid medium (depth independent) while underwater, but it was just not usable operationally.