No idea what this guy was cutting, but this does not look good.
I have to think he was cutting something he should not have been?

Either way, it’s a scary reminder to Never Leave your GF unattended! 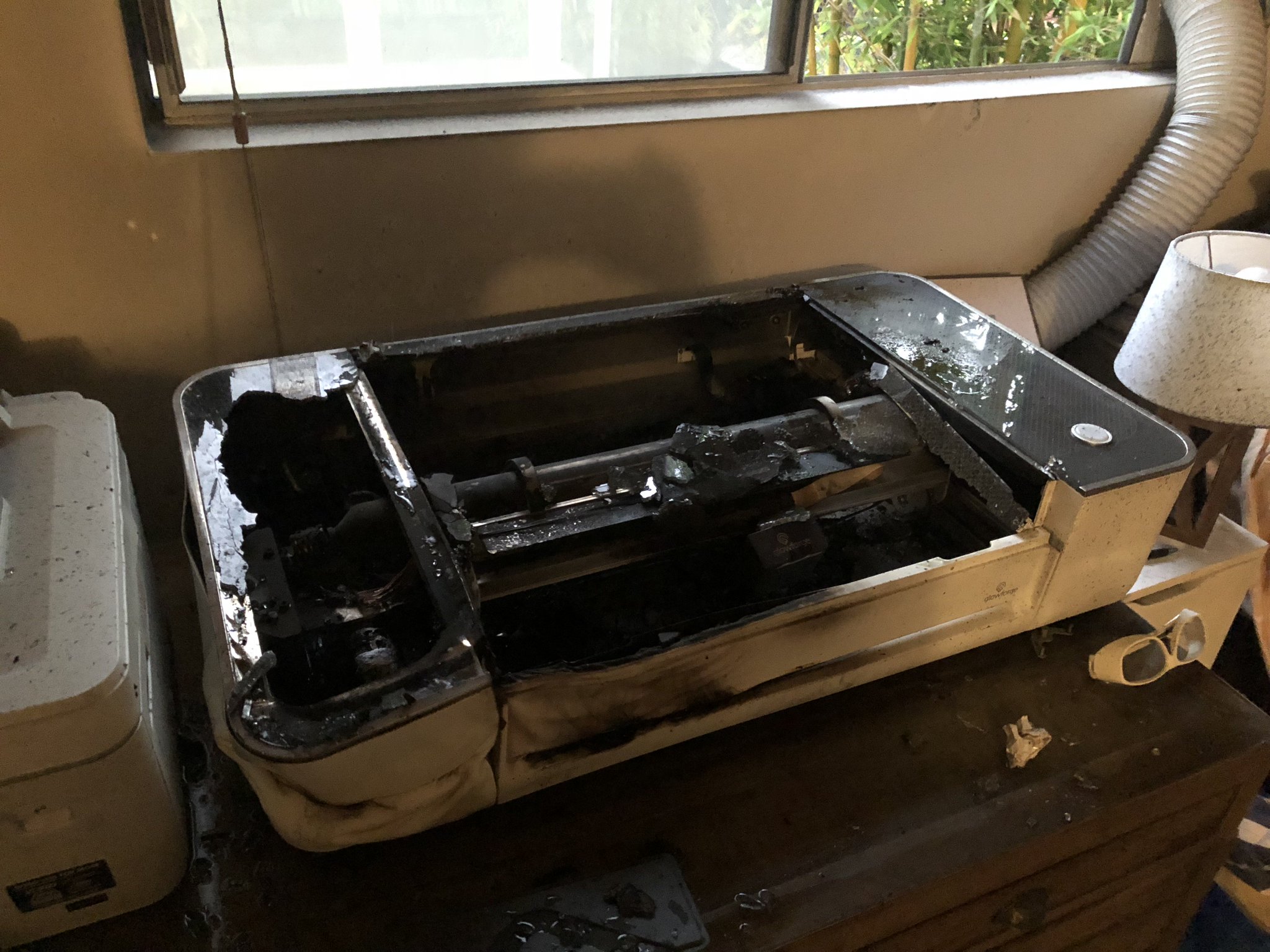 Today I made the mistake of leaving my @glowforge in the other room while printing. During the 4 hour print, the printer exploded. On my way to the hospital to manage carbon-monoxide poisoning...
10 Likes
My dream: Remote
markevans36301 August 4, 2018, 3:50pm #2

Everything is speculation unless they get ahold of it for a postmortem but the only way I see this happening is if the exhaust was partially blocked and flammable gas from the cutting process built up.

Yeah, I saw that last night.

I would think the same. That’s a heavy soot deposit for a class A fire. (Wood)

Has anyone managed an op that long?
Just speculation, but a case doesn’t melt from an explosion. I would guess the machine was on fire and water was thrown on it.
Could be the fire resulted as a consequence of an explosion, but the condition of the case, the sag and the scorch coming out of the pass through, and the amount of soot inside would suggest it had been on fire for sometime, or it burned for sometime subsequent to the explosion.

That sure is a scary situation. Is it me, or does the glowforge look really close to the wall? Seems like the exhaust could be pinched and cause a back up of the smoke and make it ignite from the laser. Maybe? I’m just thinking of all possibilities. Hope he’s ok.

Seems like the exhaust could be pinched and cause a back up of the smoke and make it ignite from the laser.

I really think that had to be a necessary element to this. Mine draws so well that there are no flammable gasses building up.

I agree. Same here, mine draws really strong as well. To me it doesn’t look like an explosion either because to my eye it looks like the laser tube is still mostly if not fully intact, and I would think if it exploded that the glass would have shattered. So my personal opinion is it probably slowly burned rather than explode. I do sure hope he’s ok and that Glowforge helps him out with a replacement if he wants one.

From looking at the single picture, it looks like a fire, not an explosion. This looks very similar to other pictures I’ve seen of laser fires.

It looks like it heated up enough to deform the housing. The coolant tank on the side may have burst, which could have sounded like an explosion, or the glass shattering could have done it.

I’m actually pretty impressed that it was contained within the Glowforge.

Good reminder to all of us to watch the GF and not walk away…agree with Joe, looks like something started to burn. At some point the glass lid overheated enough and blew…surprised the laser tube seems whole. Even with a plastic case, it seemed to have contained everything pretty well, not much soot on the wall/adjacent items

4 hr print? (I’m admitting that I’m a horrible human being for wondering how he/she got a 4hr print in this situation, but I am.)

I read that and said to myself, “something smells fishy” but I didn’t say anything as I was not there.

I adjusted the pic for a better look and seems like fire to me. Tube intact and even the coolant top look OK. Lots of soot on the left top glass and they poured liquid on it. Hope the operator is OK :-/

Naw…not a terrible person at all. It’s only natural to wonder about that since no one else so far has ever reported being able to do that.

The airflow is right to left, that explains why the severity of the damage was focused on the left. That would suggest the machine was breathing normally. It didn’t explode, it burned - and whatever it was burned like napalm.
That’s the primary reason the FNL was adamant about the “No Proofgrade Detected” message.

It makes me think, We need an IPB (illustrated Parts Breakdown) in the store for these things, so we can order whatever replacement parts we need. (this guy needs a bag full).

ROFL! I think this one is beyond repair. Might be wrong.

How was the wedding?