So a surgical colleague of mine (Kortney) is getting a gift for another colleague. She is getting a very expensive ($700) set of Castroviejo forceps (I am assuming a large size at that price not the smaller ophthalmology size). Anyway she asked if I could engrave a message on them with my CNC mill. Now while the answer is “in theory yes”, and I have done 316L stainless on my Tormach, the consequence of screwing up a piece of stock is like $20 plus my time vs ruining a $700 delicate surgical instrument. Not to mention I have no idea how hard it is to get Coolant out of the intricate mechanism of the CV forceps. Now, nobody says no to Kortney (well there was that one guy, but we never found the body to find out how she took that), so I figured, I had that can of ceramark sitting around for just such a project. So figuring a cheap Kelly clamp (which I mostly use for soldering to be honest now) would be a perfect test (the worst that would happen is the Kelly would have some bad writing on it).

So I actually used the text generator built into the GFUI (mostly because - lazy), and I don’t like that you can’t do multi-line text with alignment? Anyway, after battling the scaling down to fit the hinge of the Kelly, I popped it into the GF and used a scrap of draft board to support the curved instrument to be level. (I was using the spray ceramark which dried in about 15-20 minutes) and probably should have used a less-bold font, but with settings of 150 for speed and full power it came out great (it even worked around the bend (that was not intentional - more an issue the large fillet is really hard to see in the GFUI). I do note that ceramark has come down a bunch in price from when I bought my can (it was almost $120 when I got it) now Johnson plastics has it at $65. 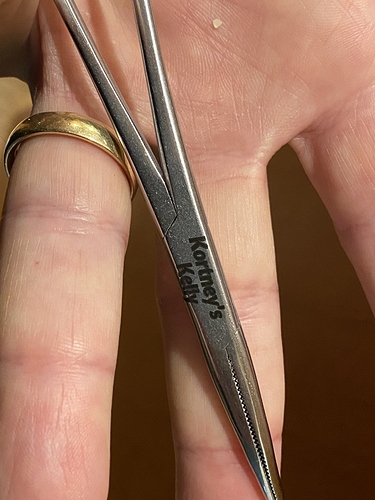 I made a video of the process. 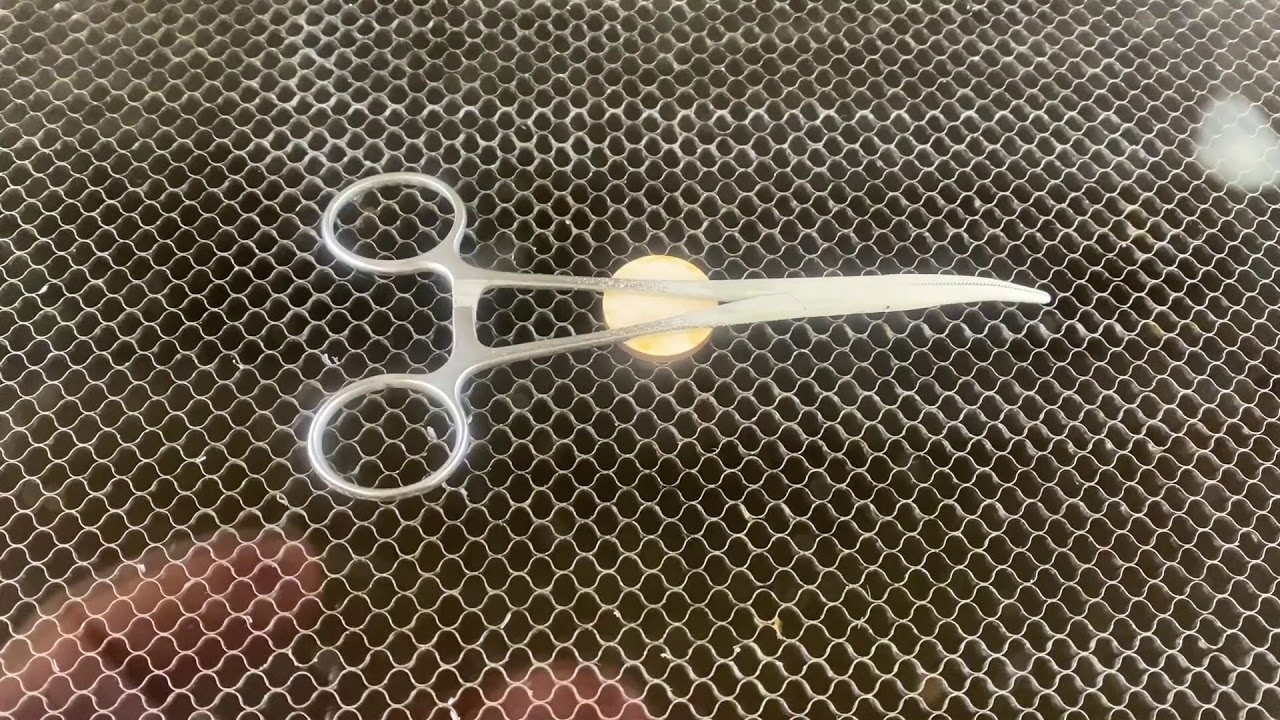 That came out really nice, especially with the tiny space you were working with. I’ve been using dry moly lube spray and have had really good results. Early on, I worked really hard to make a grid with measurements to mark on a piece of sheetmetal that I could place in the bottom when I took the tray out. Used nearly a whole can getting many layers smooth and even. It marked it beautifully. I was so proud until I went to use it. The heat had warped so bad it was worthless, but it sure was pretty.

Yeah, I agree. I do cutting boards all the time for people that I buy myself and provide. I picked up one from a customer and I also had a cringe moment at the start of the engrave. I know I have done 10 in the past month, but they had purchased this one while visiting family and it had a little story behind it. Cringe for the first 17 seconds on the engrave, and wouldn’t ya know the settings were just right.

For those wondering what this instrument looks like: (I am assuming she wants the writing down those ridged blocks on the finger grip. the only other flat-is surface are the locking tabs in the middle. This thing would be almost impossible to workhold in a vise in my Tormach. Especially with the forces applied during milling steel.

Those are interesting. I assist my vet in surgeries a lot and have never seen anything like those. Are those to hold a suture needle or syringe needle. We do a lot of surgical AI where he needs to hold a syringe needle to inject the semen into the fallopian. The only way you might clamp that (without destroying) would be to machine a wedge shape to go between the arms of the forceps and counter shaped vise faces on either side. Forgive the very crude drawing but it might explain what I mean. 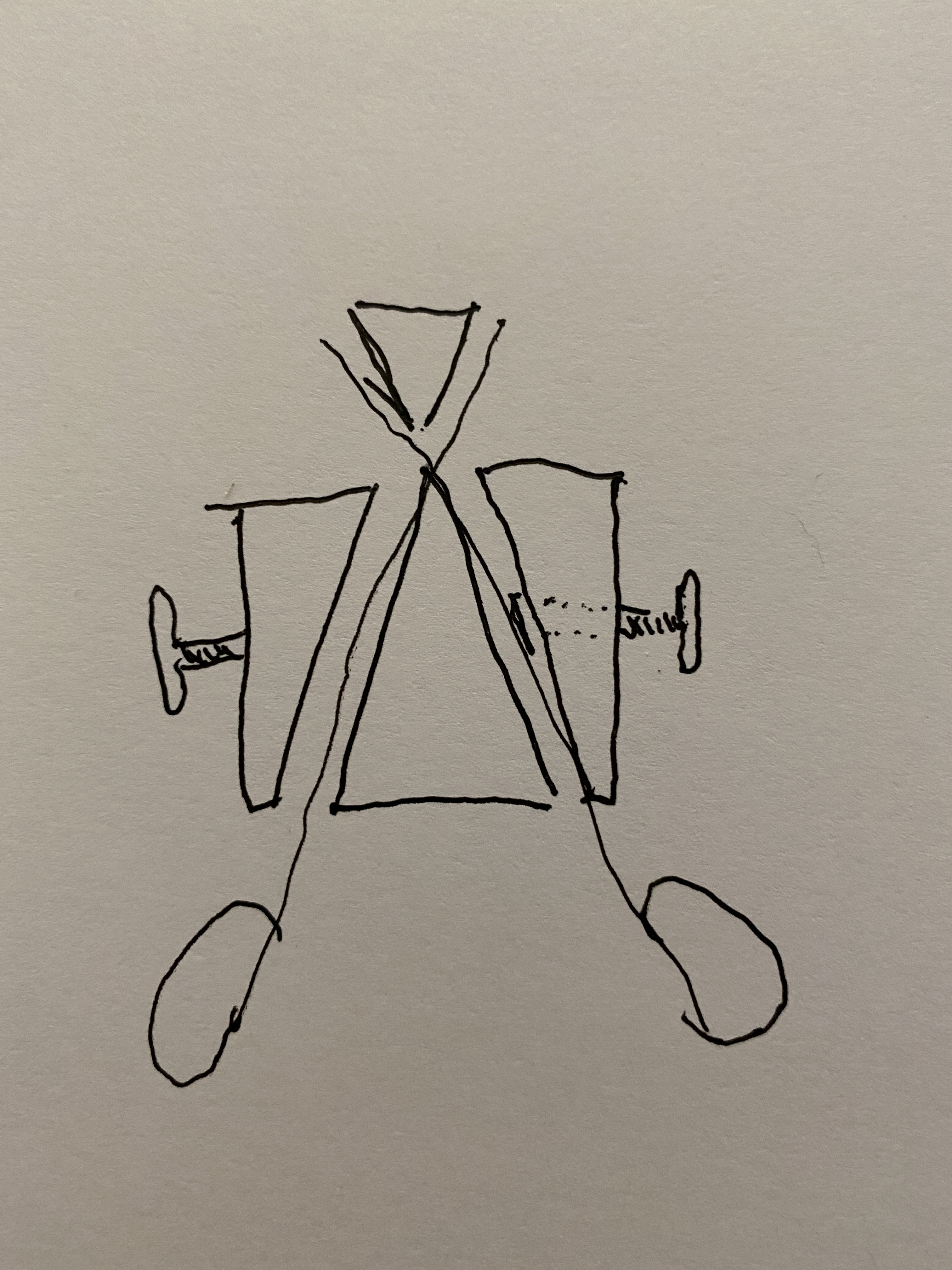 Mostly I have seen CVs used to suture in ophthalmology and vascular surgery (or vascular surgery in another surgery such as coronary bypass). You wouldn’t usually grip something as robust as a syringe needle with them as they are fairly delicate. Unlike normal needle drivers they are not designed to grip 1st/4th with the usual finger roll to unlock, they unlock/lock by successively squeezing the bow shaped arms together. They are excellent for tight deep hole needle driving (because the thing sits in your palm rather than your fingers). You wouldn’t typically use it for high-force applications like suturing the sternum or big laparotomy fascial closure. The Kelly clamp is more what you’re talking about since they are A) dirt cheap, b) rugged and can be ordered in sizes up to holding a chevy small block size.

I have never seen that sort of wedge apparatus like you are showing (and I was a surgical tech for my wife’s animal hospital before medical school - although we never did AI, we mostly just removed all those organs…); is this large animal? But not to ask a stupid question but why are you holding a syringe with a forceps in the first place rather than just holding the syringe? Seems the way to solve your problem is to take a cheap regular needle driver and machine a syringe needle path into the tips so that the syringe could be gripped easily without damage. Seems like a 2 minute task with a drill press (although careful - 316L stainless is tough stuff - or you can use a CNC mill to drill in.) By selecting an appropriate width you would apply less or more pressure on the needle. Since they are known gauges it’s way to pick a drill bit or end mill.

Essentially this is what I meant @ovm.steve (forget that the hole isn’t centered on the blades so the edges aren’t tangent, etc, this was 5 seconds worth of effort). Of course you’d have to align the hole with your desired angle for the needle and make it the right size (this would be an enormous needle) 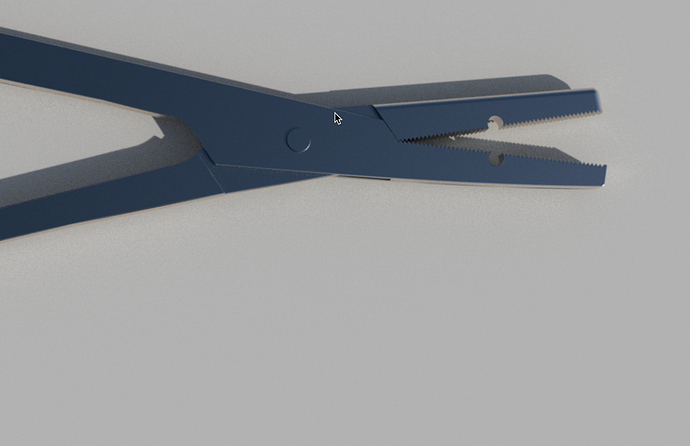 Thank you for the explanation, I am just a layman geek MacGyver

that has always been fascinated with medical devices and how the were designed to work.

why are you holding a syringe with a forceps

The needle is inserted into the Fallopian tube beforehand and held in place by the forceps while the (luer lock) syringe of semen is secured to the needle. The semen is then injected directly into the tubes.

It was just a crude drawing of an idea I had that might allow you to clamp the forceps without destroying them. It would apply all of the holding force on each arm individually preserving the spring and hinge from damage.

You would have to machine it yourself.

this would be an enormous needle

The center wedge would be stationary, while the two on either sides would move inwards as you turned the screws, pressing the face against the forceps to hold them in place.

There are all sorts of crazy holders (the surgical equivalent of the solder helper arms. For instance the Omni ring does this for abdominal surgery (but those things are stupidly expensive) and can hold all sorts of retractors and other instruments in a specific attitude for the surgeon.

In humans we generally cannulate the Fallopian tubes from below (I mean there is already handy path from the outside to the fallopian tubes so we just push a flexible catheter (I know for the women who have this, it’s not “just”, but better than a laparotomy!) Although I realize in small animals (dogs/cats) the Fallopian tubes are minuscule and hard to reach since the uterine horns are so crazy long (since you have to put those 8 cute puppies somewhere!)

you have to put those 8 cute puppies somewher

The whole miracle of birth and the process to get there is amazing. I crawl into the whelping box with the mother for every delivery and am there till the end. I have some that won’t even get in the box unless I do. And then there are the occasional C-sections.

I really enjoy assisting him in the various surgeries. I had wanted to be a doctor when I first started college, but was more involved in fraternity life and beer than my books.

My favorite thing is when patients come to my wife for evaluation of “an abdominal mass” and she does a basic exam, hears a few heartbeats and takes an x-ray (well she does have multiple masses, and they will soon be pooping all over your living room!). It’s like the baby goats we just added to our herd, they guys who had the parents, had just left the males in with the females, and were shocked to discover that that’s how you get baby goats. I mean seriously, like their parents really skimped on “the talk” apparently (plus probably was a bad idea to play Barry White records through the speakers near their pen…)

But luckily we got Oreo and Caramel from that “accident” (adorable!!!). But since our boys are neutered we at least won’t be having that problem. Also the number of people who ask us if we get milk from the boys (because they read somewhere that Nigerian Dwarves are a dairy breed) - Um, that’s not how mammals work. And my favorite variant of that is “but they have nipples!” - people seem shocked with my wife that male dogs have nipples. As she points out, so do male humans, or all male mammals for that matter.

Biggest animal my wife has ever delivered by C-section was a calf (which weighed more than she did). Mom was almost a ton.

“Let me be your Billy goat… Right On…Right On”

We had Nigerians for a while. I couldn’t find anyone to come feed them when we went to Israel, so I gave them away.

We had Nigerians for a while. I couldn’t find anyone to come feed them when we went to Israel, so I gave them away.

Where are you in Israel (I grew up in Haifa, and in some of my teenage years lived in Ramat Hasharon). My dad was a professor at the Technion and later Tel Aviv university (and then when I was in college they lived in Jerusalem where DEC was designing the Alpha I/O chips - ironic since DEC’s headquarters were a 15 minute drive from our house here in MA)

Our 2 adults boys (2 and 2.5 years old and the new girls both born in April) are having fun with all the summer vegetation. (they suck at posing for photos as a group! especially when standing on food). All of them have glowforged anodized tags on their collars. Oreo is quite the fearless character and she will let you know her opnion, while Caramel is way more cautious (she may have not been getting enough milk from mom, as she was pretty spindly when we got her compared to Oreo - luckily she is bulking up with all the food) 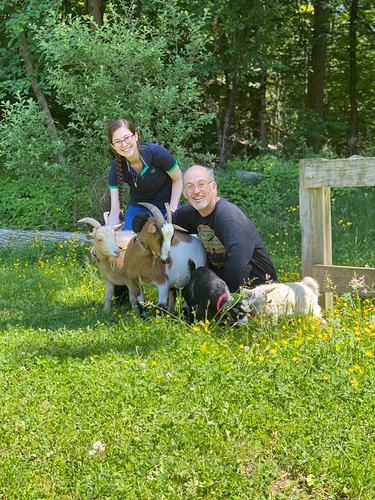 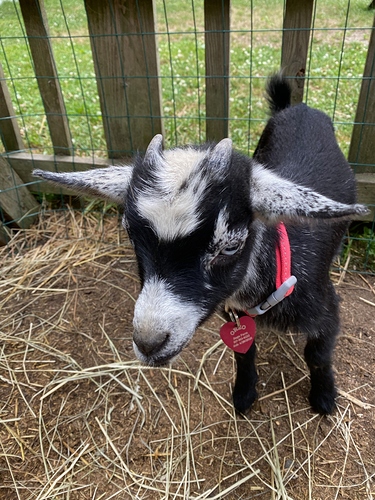 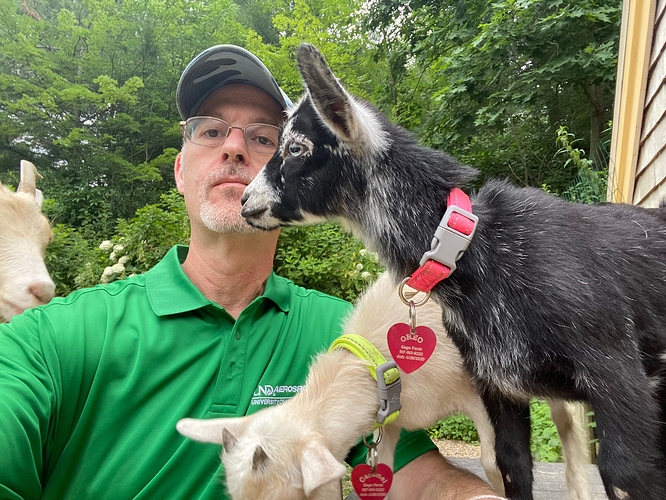 Oh I’m sorry. I was over there only two weeks. I absolutely loved it though and we were planning on going back this fall. Not sure that’s going to happen now.

I was over there only two weeks

Wait, you gave up your goats on a 2 week vacation?

Sadly yes… but it was ISRAEL!!

I can’t believe someone couldn’t feed goats. I mean they are zero maintenance pets (we just throw food in their bowl and add water to the bucket twice a day. I mean sure we hike with them, but that’s just for fun. Pretty much that’s the extent of what some neighborhood teen would have to do. throw a scoop of grain into a bowl and add water to a bucket.