Is it possible to engrave ceramic magnets?

The short answer is yes, the GF can engrave ceramics, but the quality of the result can depend on the ceramics and image. If you do a search for tile + engraving you’ll get tons of info about it.

Do you mean the magnet itself is ceramic, or are you talking about a glazed tile with a magnet on back of it?

I do not know how hot those magnets will get… but once a magnet reaches it’s curie temperature, it will lose it’s magnetic properties. So that MAY be a concern as well. Ceramic magnets’ curie temp is aroung 450c. I think the laser will heat it to much higher than that, but… I am not going to swear to that as I rarely run around measuring the temperature of things I’m lasering.

You might get hyperlocal temps higher than that, but not the entire magnet. 450C/842F is insanely hot, we’d all have burned our houses down by now if materials routinely got that hot in the GF.

I wonder if this would mess with the fan when engraving and cause the engrave to stop. I know when I use magnets to hold down pieces I need to keep them WAY away from where the head is going to be or it won’t complete as it’s messing with the fan.

I keep meaning to shield my fan, has anyone tried that yet? I miss throwing magnets down without a worry.

Also about the temp green clay turns to metasilicate, and Aluminum is a liquid. Low fire for a kiln, burned to a crisp for a steak.

See and I was thinking “pizza oven hot”. Different priorities

I know I’ve engraved them accidentally when I was using them as hold-downs for cardstock and wasn’t careful about image placement at the edges. The ceramics I have are a great deal less powerful than the neodymiums I use in other circumstances, and I rarely have trouble with them stopping the head. As far as heat concerns, you can try breaking up an engrave/score into multiple pieces and letting things cool between runs.

A past tragedy in the Canadian Navy resulted in an aluminum (probably an alloy) ladder melting in an engine room fire. Aluminum was replaced with steel for all ladders after that. They said the temp was 1400 F when the ladder failed. There were foot steps on the ladder from someone who almost made it out until a rung finally collapsed with his weight.

someone who almost made it out

I cannot imagine even a person walking dead at those temps

Certainly air temps that high would not have soaked into much by that point. It was my understanding that when Aluminium hit its ignition point and burned like Magnesium during the Falklands War that aluminum fell out of favor for any military vessel to say the least. Certainly in Commonwealth Navies.

The Aluminum I was involved with had been cast to start with, so any additives would make it melt better and sooner.

The magnet itself. Small ones.

I doubt it’ll be bad for the gf or particularly noxious so I’d just try it if I were you. I’m curious how it turns out.

I keep meaning to shield my fan, has anyone tried that yet? I miss throwing magnets down without a worry.

you can just shield the magnets and then it’s not an issue. the metal plate on hard drive magnets dissipates the magnetism. you can flip them onto the metal plate size on the honeycomb and there’s zero sticking power. added bonus: you can put just the very lip edge of that plate on top of your material and still hold it down to the honeycomb (if your material doesn’t fill the bed), and thus block less material from being cut/engraved.

they’re also cheap. plenty of deals on ebay. 6 for $10 here. you want the large ones, tho. from full size hard drives. not the mini ones from laptop drives.

Yeah that explosion happened in 1969 to a Canadian destroyer (HMCS Kootenay) off the coast of England. The cause was a bearing half had been installed incorrectly in one of the gear boxes. The oil galleries didn’t match up and the bearing overheated during a full power trial. 9 men died and 53 were injured. Here is a picture of that ladder. You can see one rung is bent and the other completely broken: 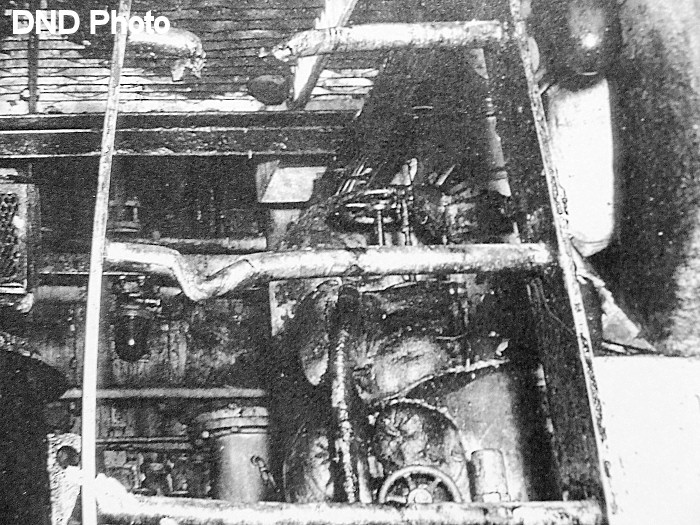 Sadly I once knew a fellow who had been on the ship at that time. He was on his way to the engine room but was so hung over he had to stop off to throw up. While that was happening the engine room blew up. Drinking too much actually saved his life.