CHALLENGE: Under sink organization with angled storage, pipes, disposal...oh my!

THIS. Hands down is my most difficult challenge to organize. So much space, but with all the angles (plus protruding disposal & pipes), it makes me just shut the door and think of something else.

The other challenge is I can NOT physically get down on my knees to get things out from under the sink. I have to wait until another family member will get down and dig for me. I have no doubt one trip to a surgeon and they would recommend replacing both knees…but I would rather forge wood/acrylic than let someone forge on my knees.

It’s an interior corner cabinet and is very deep. The only thing I have been able to come up with is 2 long pull out drawers on the sides. If I put one down the middle, adding for the drawer glides and the shelf will take a lot of the vertical space due to the garbage disposal. Just feels like so much will be wasted space. Any ideas are welcome!! 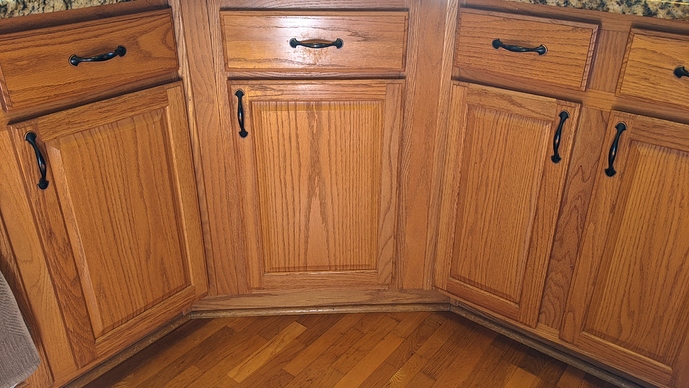 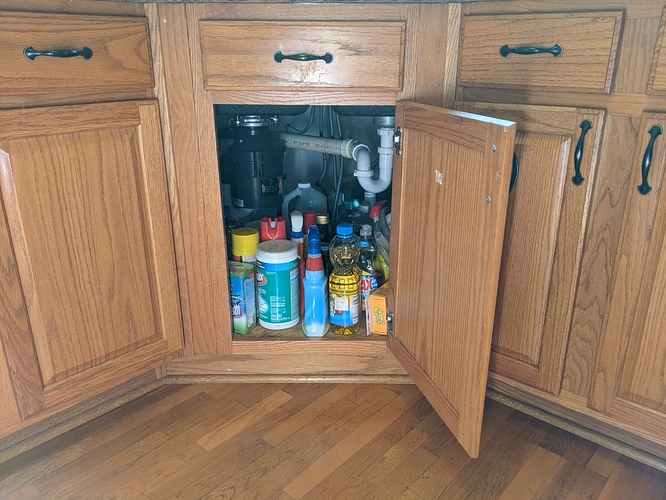 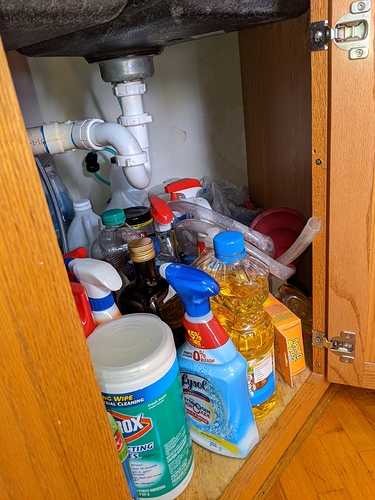 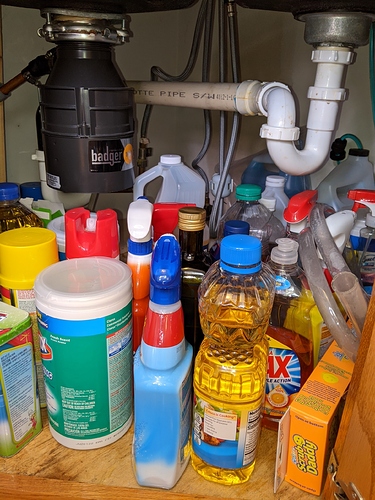 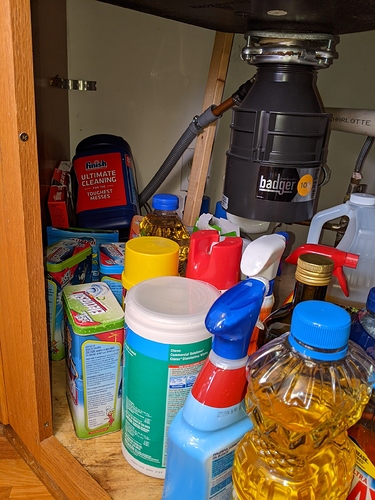 I can get someone in the house to install it if I can design it and cut it out. Thank you for taking the time to read through and look at all the pictures.

P.S. While I wait, I am happily printing out those canned food holders (see Glowforge catalog!) for my SMALL pantry!! So tickled to see those!

Personally, if i could not get down to get anything from that space… i would take everything out of that space and relocate it. But that’s just me.

I wish it was that easy. This house was not made for 4 adults with differing taste buds (thus the different types of cooking oils to begin with). The pantry I think was supposed to be the guest closet and they decided it needed a pantry (so think smallest coat closet). We added a wall of IKEA cube storage and it still doesn’t house all of our stuff…even cutting down a lot. I like to cook and freeze in batches.

That is quite a challenge. Maybe some type of organized lazy susan so you can just spin it around until it gets to the front. But it would need dividers and walls to avoid stuff falling over…

I’m with @kanati though, I actually keep nothing under the sinks, because so many times there have been unexpected leaks everywhere we’ve lived and I’ve lost a lot of cast iron pans and other things that should not have been exposed to moisture.

And I’m also very short, so if anyone comes to my house they’ll probably notice that all the top shelves in the cupboards aren’t used. But only 2 adults in my house, and I’m the only one who uses the kitchen.

The other ideas I have wouldn’t work because of the garbage disposal, and they probably wouldn’t work anyways just because I’m imagining a Japanese parking garage and not really applying it to a real, under the sink scenario.

Also, I just noticed you have cleaning supplies mixed in with the oils! I can’t do that in my house…because I usually start the day cooking with only one eye open, I don’t really “wake up” until mid afternoon…I can really imagine myself pouring Ajax into a frying pan…

My ex’s place has large corner cabinets both below and above, they have “lazy susan” style fixtures inside. Not optimal but they worked fine since the home was built in the 50’s.

I’m watching this thread because I have a lot of spaces like that in my house. If there’s some magic way to get more use out of it, I want to know!

It won’t help with the deepest recesses in the back, but I’d add narrow shelves on either side of the pipes running front to back. That would leave some deep recess that would be tough to reach, but you could put the “need once a year stuff” down there. Then I’d put a slide out shelf down the middle. You’d lose an inch or so in height, but I don’t think it’d be too bad.

I do not cook until I have properly administered the coffee in the appropriate manner to get the desired effects.

I was trying to figure out if there would be a way to get those SIDE shelves to slide out, but I think in order to do that I would have to have them just offset (fan style in the correct angle to go towards the door) from the middle slide out shelf?

Good idea for my short items or maybe I could make it “circle” the garbage disposal…with a center block (so they don’t fall over under it); but the worried if we had to get to the disposal about access.

We also have a cabinet that is long with one door…we stopped in at a Home Depot and asked about getting doors or what it would take to add them on the outside but they said the oak changes color over the years and they wouldn’t be able to match the color. We aren’t necessarily staying here “forever” so remodeling the kitchen is something we aren’t willing to put the money into. Not sure how to get to everything (the long side has an “oak plywood?” on it) … my husband basically has to crawl into it partway to get to things at the back.

Son owns the house, so we are making due until we are all ready to move…hopefully to build our own. 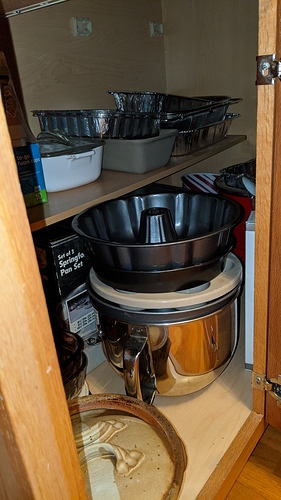 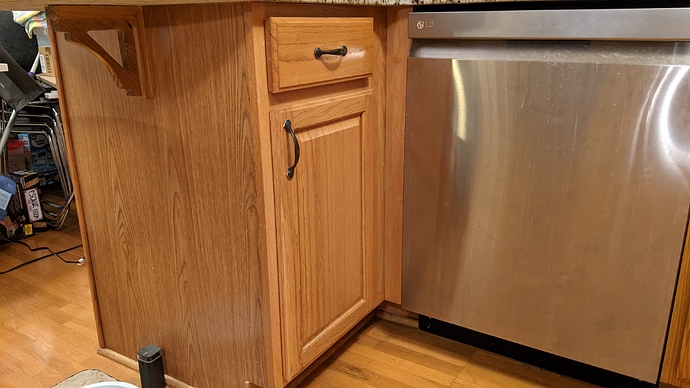 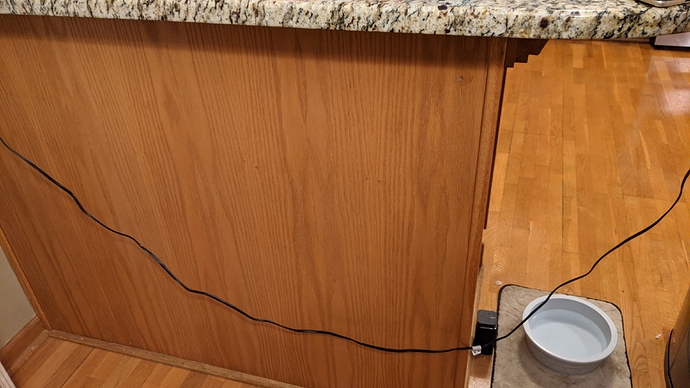 worried if we had to get to the disposal about access.

Doesn’t need to be secured. Large ones are pretty stable, you would just remove the contents. They are cheap at the hardware store or from Amazon. 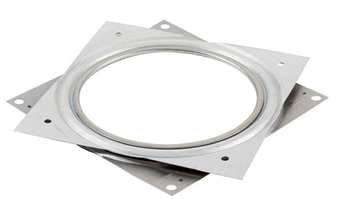 It wouldn’t help you get access to the sides, but my suggestion would be to build a shelf at the level of the bottom of the garburator/pipe, and then install a slide out drawer underneath it. It would stop you from getting stuff stuck behind, while still giving you access to the majority of your bottles, and then I’d echo the suggestion that you put the once-a-year stuff off to the sides.

If you built the shelf to sit on top of rails (instead of permanently attaching it to the sides) you could then fold it down and get it out if you ever need access to fix the garburator or the pipe. 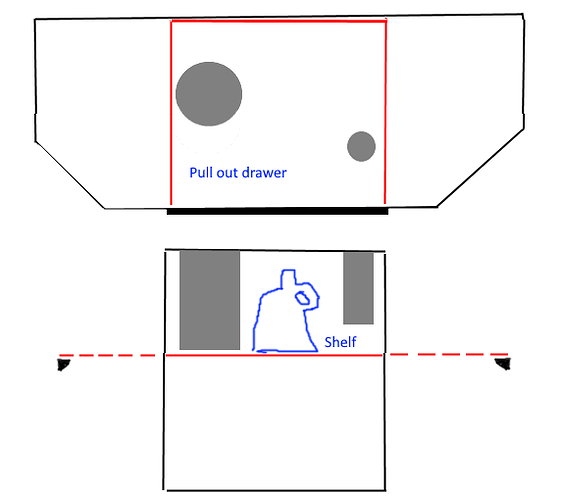 I have a corner cabinet under my sink, but the corner is a right angle instead of the wide one you have. Pre Glowforge,I found a couple of those metal sliding rack things on clearance and BBandB, so I worked with that fixed size. I put one along the left side and one along the right side. I have to be careful how I stack stuff on the garbage disposal side. Then in the middle I put one of those metal racks that separate your dishes top to bottom so I can stack stuff more creatively. I carefully left room for my undersink dish soap and had to work around the 4 filter + tank water system. I also have to be careful how I stack stuff so that the faucet head weight and hose can move freely. It is really crazy under there, but it works.
Trash bags and dishwasher tabs live on the white shelf.

Since your area is shaped differently, perhaps angling the front of 2 racks would fit?
I have also seen 2 story sliding racks. 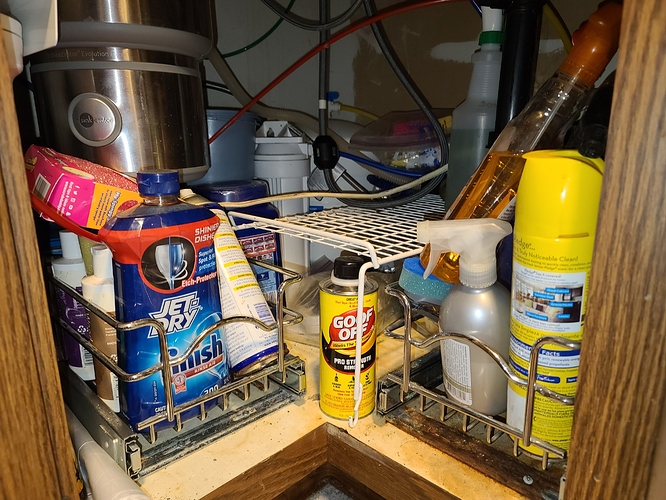 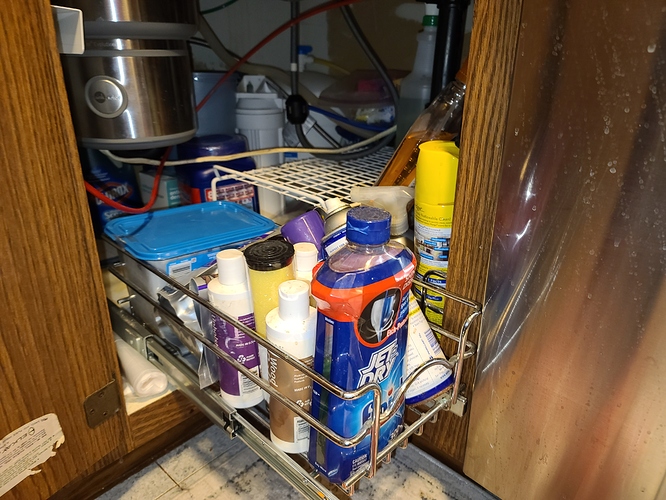 I think you need a modified version of this stacked shelf system. 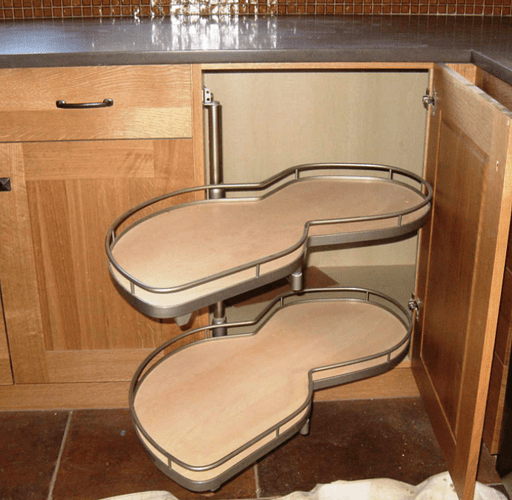 The shape of the shelf may need to be modified to fit around the pipes, but the ability for the to tuck in and roll out will not only offer storage, but help you with your knee problem. The mechanism is simple enough., If you can measure well enough for the shelves to fit you should be golden. I had this in an apartment and it worked well.