Hi all. I am trying to make a led lighted sign made of channel letters for my sister’s shop. I have seen this done on a cnc, but I only own a GF. I use Photoshop and AI. I know how to use the software to make the letters, using outline stroke, merge, offset stroke… I need help making the channel for the LED strip to sit inside. I plan to use 1/4" black acrylic (letter front) and 1/4" light transmission cast white acrylic from inventables for the back. How do I manipulate AI to engrave out the channel in GF? Thanks for helping. I am linking what I am trying to create … Ultra-thin Letter Illumination with the Ribbon Strip from Bounce LED - YouTube

I don’t know the answer to your question, but I can’t wait to see the finished product!

To engrave, create a filled shape in AI the length and width of the desired channel. You will have to experiment with the actual engraving process to determine how best to get the desired depth. You may be able to create a channel quicker by making a hollow third layer of material out of 1/8" material which is sandwiched in between the two 1/4" layers.

You may find it simpler and MUCH faster to instead of engraving a channel to build a 3 sided box to lay the LEDs into it. There are box generators that’ll do a tabbed box if you’re worried about gluing, otherwise straight strips glued together with acrylic glue/cement would do the job nicely. 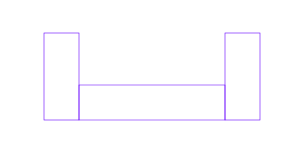 Agree with dklgood - would be far better (and quicker) to cut the “channel” from a middle layer of the required thickness to house the LED’s.

Engraving that deep into acrylic will create a lot of debris. Also, Acrylic is probably the #1 fire-inducing material.

You can preserve the location of the “inside” pieces with thin tabs, just as would be typical when cutting similar shapes using CNC. You could then just snap the tabs away out once everything is glued in-place.

Thanks. I like dklgood’s idea of quicker! Nothing has been quick with starting a business lol. For the middle layer, I was just looking at specs of the led light its 6.5mm for the RBG strip. So, I am thinking making an outline cut for the middle layer with 1/4" white light acrylic and then just welding the 3 layers. I’ll post pics soon, she just asked me today. And I’m trying to plan in my head if it’s something I can do. I need to order more acrylic and the lights but I might try out a smaller version and see how it goes. thanks alot

You might want to rethink the LED strip. I’ve got three different types of RGB LED and none are thicker than 2mm, which would easily fit in the thickness of a channel cut from 1/8" (“Medium”) acrylic.

I suspect you’re looking at the waterproof stuff that is encased in silicone, that is much thicker.

Edit - just realized, you might be planning to use the “neon” LED strips which have a much denser LED distribution for a uniform glow. Those are much thicker, but I can see why you would choose them.

I’m curious if we will be able to see the seam of the middle layer when lit up?

I’ve done a lot of stuff with LED’s ‘channeled’ in, so to speak. I agree 100% with those above who are suggesting the alternatives to engraving it.

If you design the bottom LED-containing section as @deirdrebeth suggested above, with the sides completely enclosing the bottom piece, and make that section out of opaque material, I wouldn’t think that your seams would show. You could probably assemble a small test piece to test that theory.

Depending on how large the letters are could you not make the light transmission layer by cutting it as a path? I have attached a svg file as an example. If its a shop sign I am guessing each letter would be about 11x5 inches at least. The gray area may be sufficient to lay a led strip.
To get the gray area as a channel you would have to do another stroke to path step. The stoke width would dictate the thickness of the wall and the channel in gray. The only issue may be the thickness of wall may make it too bright but you could control brightness with the LED remote. This would mimic the CNC. I hope this helps.

Cool idea. The Youtube video makes me want to make this too! LOL.

I just realized this could be used to make a light box !!! To get an edge lit Acrylic engrave. I was wanting to make a lit frame like this. Thank you for solving my problem too.