GF #3 is now giving me the new air assist error. I’ve removed and replaced the head cable and checked the connector pins, which all look fine. The head fan doesn’t appear to be gunky or anything (I’ve only had the machine for a week) and spins easily when I blow on it. What else should I try?

So it was fine for a while?
Well, before I boxed it up I would check the actual fan connection. To do that, you have to remove the carriage to get to it. Caution, the little board that the fan plugs into is not supported where the plug is, and you need to be careful to support it when unplugging/plugging it in. Since I had it in my hand, I would also check that little board for a crack, just because it would be easy to stress it during assembly.

I would also check the fan for operation after removing it from the assembly (depending on what the diagnostics tell support). If their reply was the standard “We have determined…” I personally would like to have a more thorough explanation, just to ease the pain of the return. If it was the fan or the small board it plugs into, I would request the new board or fan instead of sending the whole thing back. That’s just me, plus, mine is out of warranty.

Yeah, it’s been working great for a week.

If you have warranty left, you should probably wait for the result of support’s diagnostic, but here is a pic of the assembly. You can see here the screws that secure the board to the carriage, and how the board extends to the edge where that fan is mounted. That extension is where the board is flimsy. 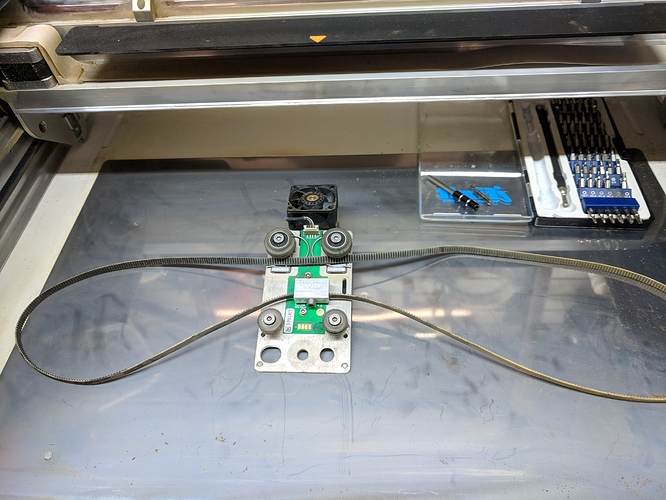 Got it, thanks. I have a tiny bit of warranty left, so I’m waiting… I cleaned all the pins and contacts again and gave it another try, while leaning over to watch that fan from the back. It’s definitely not spinning.

Ah, there are actually instructions in the support section for removing the head to clean the fan. I guess that’s okay with my warranty, so I’ll give it a try while I’m waiting.

Okay, I took the head off and cleaned the air assist fan perthe instructions in the support section. It really wasn’t very dirty – I had to try pretty hard to find stuff to clean off of it. I didn’t mess with those contacts, other than to press on the connector to make sure it’s seated well.

Ran my next job and it stopped at the same point as before, hesitated a bit, started again, hesitated again, then went on and finished. During the hesitations, the fan was stopping and starting.

I caught it on video, so I’ll upload that in a sec (I’m typing this on my Windoze machine, which doesn’t talk to my iPhone as nicely as my MacBook.)

The job I caught on video finished at 5:10 PST.

I tried running another print while waiting for the video to upload, and the same thing happened – the fan is stopping during prints, which makes the print hesitate each time. The third time it happened, it errored out and told me to contact support.

EDIT: Skip to about 1:50 to see the fan stopping and starting.

Oy! Hope it can be resolved…

There are 4 contacts on the carriage - make sure those are clean. And then, 4 matching pins on the head - might check and see if those push in and out ok.

Yep, I checked those, and cleaned them and the contacts. I have a sinking feeling I may have to do another return. sigh

Bummer! I got the same air assist error. I cleaned all the fans (didn’t like taking the carriage off) and still no go. The head would only move a little when I initiated a print and then give me the error. Support did something remotely which allows me to print for now, but said the underlying hardware error remains and that I have to send in my machine. The replacement is supposed to be here on Tuesday, and I won’t ship this one back until the other one is up and running.
Hopefully support can also get yours operational for now until #4 arrives. This is kinda making me queasy. Seems like replacing the fan would be so much better than sending the whole machine back.

I hope they can get it running. I had so many things I wanted to work on this weekend! I’ve been anticipating having to resort to doing housework or something.

Ooh, it looks like @Rita is around today – maybe she will get me printing again! crossing my fingers and toes

sigh Guess not. Howcome my stuff always breaks on the weekend?

This seems like a common problem. I wonder how many fans were operating intermittently before the failure detection was added.