Clap Hands - When this world is trying its hardest. To leave me unimpressed

(The first part is a Tom Waits quote, the second part a Depeche mode quote). For when the world has left you too dispirited to even put up an ironic slow clap. For when even your hands are just too exhausted. But a statement must be made. I made Clap Hands;

Your thumb and index finger alone can clap. The rest of your body can remain stylishly unimpressed.

The black foam hands are safety concession, people would try to clap too close to eyes and other delicate organs. “Don’t look into the laser with your remaining eye” isn’t just good laser practice, it’s just as true when you have mechanical Clap Hands. 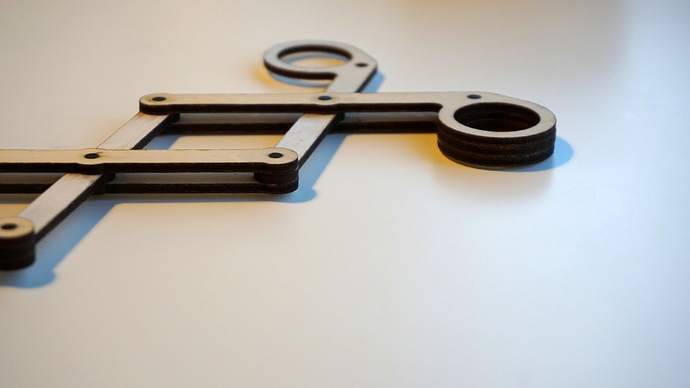 DSC00782.JPG1333×750 137 KB
These scissor grips will, even though you’re trying to be ironic, wrestle and pinch your fingers robbing you of all your cool.

Wow, for unimpressed clapping of hands, that is some pretty aggressive clapping going on in the video. I like it. They say, “I am aggressively unimpressed and bored by you. No go away and leave me alone.”

As for attaching toe nail clippers, trust me, it’s a terrible idea. Marvelous, but messy.

Let me know if you think I should make the SVG available. There are some major barriers;

So it’s not an easy build even with the files. Let me know if you’re feeling brave!

Ooh I see this more as a extendable fly swatter /clapper

Let me know if you think I should make the SVG available. There are some major barriers;

YES! I so wanna splat things with clapping hands, barriers be damned.

Sorry. Those who have to ask are not allowed to know.
That’s like asking “What’s Guns N’ Roses?”

But I know who Guns N’ Roses is lol

FWIW, I clicked on this post because the title immediately made me start singing “Clap Hands” … missed the DM reference though.

I need this to get my husband’s attention when he’s watching TV.

Bravo! This is great, as was the video. I was a camp counselor, and this would have been awesome to have when the kids did something silly, or around the campfire.