I’m posting this here since I’m probably the first to experience it, and it’s nice to know .

Recall my post about smoke coming through the edges of the front door of the glowforge? Well there was a reason for it. It took me a while to troubleshoot it, I’m a little slow on the uptake sometimes because I’m so naive.

I moved the machine under an exhaust hood with a total of three feet of the supplied flexible duct to eliminate the long run of 4" pipe. I still could feel air being forced out of every crack in the machine by running the back of my hand in front of the door edges. That could only happen if the interior were pressurized.

Yes, there is an intake fan also, there has to be. An exhaust fan cannot pressurize the inside. Not on Earth anyway. The exhaust was blocked causing the intake fan to exceed the output fan.

The smoke is actually a very fine particulate, and like sediment it accumulates. There is a grill just inside of the flange to connect the duct to the machine on the back. That that grill will eventually face load and restrict airflow.
I could be forgiven for assuming the thermal profile of the machine was in a state of being updated, and that was responsible for the cool-down pauses. No.

After a while, maybe years depending on usage, when the glowforge seems to be emitting more smell than it did, accompanied by cool down periods - it is time to clean that grill.

I am in the process of engraving the 2,800 side of a token and 1,400 cuts. That’s what happened.
The best test I found was running the back of your hand in front of the door seams.

That little bit of information would be helpful in the instructions - to benefit those of us who actually read them.
It will happen, it’s just a matter of time. The machine has returned to its former glory.

37 Likes
My Glowforge has picked up a nasty smoking habit
Houston we have smoke
Tracking down leaks
Anyone do a teardown or have an exploded view or wiring details?
PrintToLaser October 4, 2017, 1:31am #2

Come to think of it, I should probably explain the process.

I took a probe small enough to penetrate the holes in the grill an knock down the wall of ash and sucked it out with the shopvac.
It’s a very gradual change, and not until your nose and the back of your hand tell you do you have any indication.

@karaelena was the first to post about cleaning the exhaust outlet and the grill to the outside. I went and checked mine and hadn’t noticed that I was smelling more smoke than usual but paid attention and then checked everything. The screen to the outside was totally clogged and spreading and the exhaust was about 1/2 clogged, including some big chunks of stuff. It was pipe cleaners, vacuums and air compressor to blow everything clear. Made a bit difference.

Thanks for relating your experience. I’m worried about having to clean mine frequently, since I taped the bejaysus out of every millimeter of my exhaust. It’s going to require a lot of work to open it up and then put it back again. Hoping it’s fairly rare that I need to do that… maybe having the negative pressure from the booster fan will help to keep some of it from accumulating.

Of course, I’ve read on other forums for lasers that require external fans, that the external fans get destroyed pretty quickly by all the gunk.

My job has a lot of similar exhaust system attached to our machines. We use pre-filters to catch most of the larger particles before they reach the vent’s grills and fan blades. I noticed mine has no such thing. So new project. Time to laser cut a new pre-filter holder for the exhaust vent.

the external fans get destroyed pretty quickly by all the gunk.

Yes, the efficiency of the fan is significantly reduced by accumulation. With the machine powered off and the gantry forward, I took an old toothbrush to the blades to remove a massive buildup. Being flexible is an advantage to accessing it. You have to hold the fan still while brushing it.

The need to put a physical barrier for fingers and other anatomical protrusions between them and a fan that is encapsulated in an exhaust tube, and reduce it’s efficiency by a significant degree is a reflection of our litigious society and the necessity for a company to judge it’s product’s liability in the hands of incompetence.
The exhaust flange being circular with an even compression around it is structural enough. You don’t need to obstruct the opening for support, Let the freak fragments fly.

I took a long Q-tip to it with less success. I need to get a toothbrush - it would probably work better. (glad i’m not the only one who tried to clean it.)

WOW, I’ve been experiencing this! I don’t feel so alone now

This was one of my support issues and toward the end I had smoke pouring out of my lid and front door. I adjusted/aligned my exhaust several times and even completely moved the unit to a new location trying to rectify it and nothing helped. I took this video to show how much air was escaping. When I took apart the exhaust to prepare the unit for packaging a few days ago, I found the exhaust fan was very clogged. It even had little bits of burned masking stuck in it. Is it possible the pressure inside could get strong enough warp the lid at all? Mine developed a bow in the lid in the last few weeks that had not been there before. (Yes, it had a slight bow when it arrived, but this was a recent change to the lid.)

Is it possible the pressure inside could get strong enough warp the lid at all?

Air is a fluid. It’s going to follow the path of least resistance. It’d escape through any number of other places or force the lid open a little long before it’d actually bend the glass of the lid.

You too!
I had been going around in circles trying to understand how my exhaust run that had been fine was not doing the job anymore. I was actually convinced my system was poorly designed.
All of a sudden no more pauses for cool down!
The moral for us is to pull a periodic cleaning of that grill. As soon as my warranty turns into a pumpkin I’m going to cut that grill out.

No, as Tom said there is no way the back pressure could bend that glass. I would suspect an issue like @Xabbess had where the hinge attachment was compromised.

With to much back pressure, I think the internal fan is going to find exhaust through the seams and joints.

Also, here are pics for how it will be during off site setups. 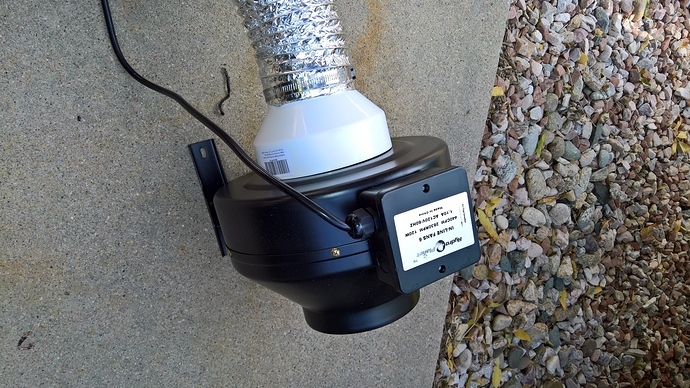 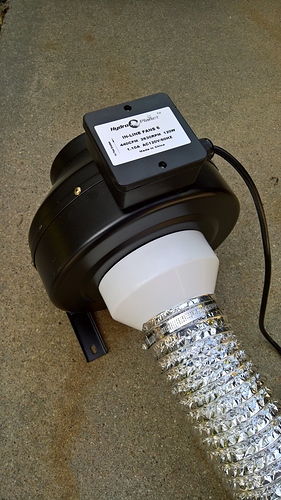 Yeah, I was about to upgrade to a 6" fan because I couldn’t find a 4" with more than 200 CFM. Because I knew he had a significant run I was talking with @karaelena about my problem and he said because of the difference he saw between his PRU and his new one that he would wait until I got my forever unit before he would made any changes. That saved me a lot of hassle and $.
I wish I had seen his post about cleaning the grill a while back, that would have saved me going in tight little circles trying to figure it out.
I had assumed the machine only had one fan. It took until the machine was pressurized to give me the clue I needed.

Looks like a good setup you have there for off site. Standard PVC reducer there?

Looks like a good setup you have there for off site. Standard PVC reducer there?

The plastic reducer is going to be modified with the magnets that @joe has listed to connect the PVC to the booster. The suction does an awesome job (until you turn off the fan).

Here are the Amazon Links: 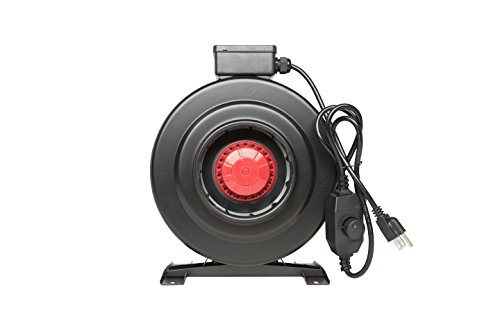 We strive to be your guiding light in the world of indoor growing, enabling you to focus your energy on making your crops flourish. Package Includes: Inline Fan built-in speed controller, Mounting Bra ... 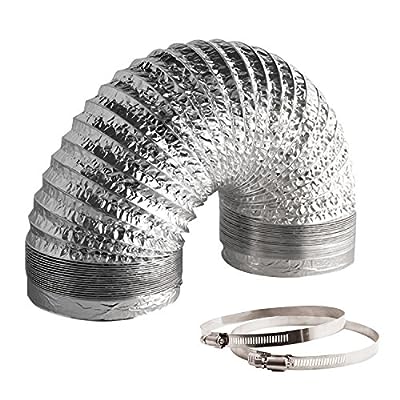 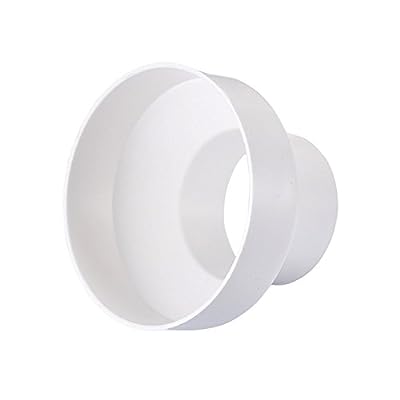 For the in house ducting 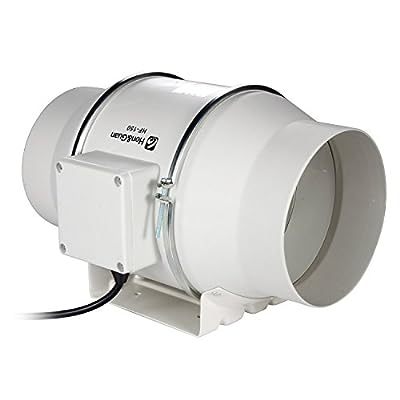 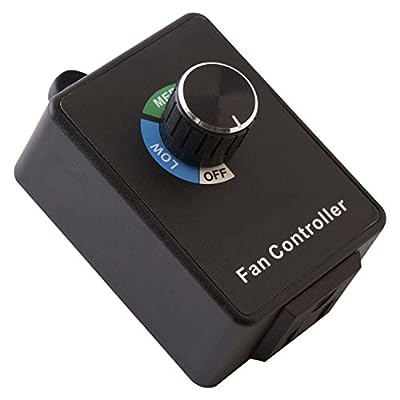 It can adjust your fan to full speed in summer and to low or medium speed in winter to ventilate your grow room according different need. If used with fan and filter for ventilation, the suitable and ... 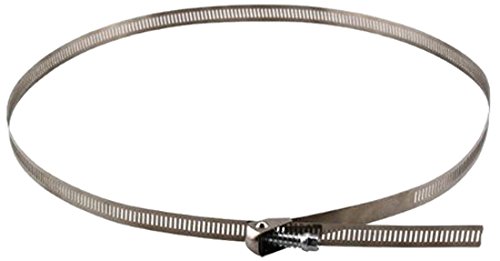 These stainless steel hose clamps are perfect for attaching flexible ducting to air cooled hoods, exhaust fans, filters and silencers. They are simple to use and make for a clean duct connection. Conv ... 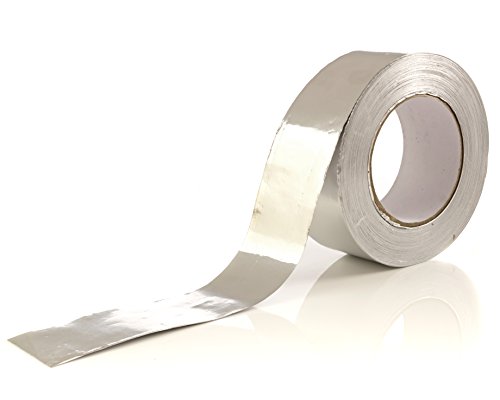 Thanks for the links!

Sorry about that, “bow” was a misleading term on my part. The glass certainly has not bowed, but I’m guessing the added pressure on the hinge made the lid no longer sit as flush as it was before. The amount of deviation from the lid to the cabinet doubled from what it was just a few weeks ago. It was only on the left side nearest the exhaust and the right side of the lid was still relatively flush.

I had been going in circles trying to figure it out too PrintToLAser and I’m so glad you posted. I got so frustrated trying to figure out the exhaust issue and it had gotten to the point of not being usable. I know it was well intentioned, but I had folks keep telling me it had to be a kinked hose or the exhaust wasn’t set up correctly. It just made no sense to me that the exhaust was working fine for weeks and then wasn’t. I checked to make sure the fan was running by looking from inside the unit, but now I feel silly not taking apart the hose and looking in the back of the fan. ( I just get nervous about warranty stuff and don’t want to poke about to much.) I suppose it could be coincidental, but I experienced misaligned print issues as well and I got a new unit.

Yeah, I used the wrong term when I said the lid was “bowed” as I wasn’t meaning the glass had actually bent. The left side of the lid no longer sits flush and the amount of deviation from the cabinet has about doubled since I got it. I was thinking perhaps the added pressure messed with the hinge on the left side. FWIW, the lid on the new unit is flush and beautiful and the exhaust is working perfect. I’ll keep it that way this time

Oh yeah, I feel it too. I was all talking about how they needed a weatherstrip on the front door. All those little gaps are fine, and actually help the machine ‘breathe’ and clear the interior.
I also know the relief you feel at your exhaust system is fine. I spent days and dollars putting it together, and everything I was hearing led me to believe I was stupid.
We know what to do when we start smelling smoke where there was none before.

Thanks for letting us know about this! This feedback is very helpful and I’m glad that you were able to share your experience.