For many years I’ve had the idea of making a MIDI controller in the shape of an English concertina. Now that I have my Glowforge and am comfortable with using it, I thought it might be possible for me to build one. But let’s take a step back. What’s a MIDI controller? What’s a concertina? And why would anyone want such a thing?

A concertina is a kind of squeeze box that’s roughly circular in cross section, with buttons on each end and a bellows in the middle. When you operate the bellows and push the buttons, air goes through little devices called “free reeds” and noises come out. If you do it well enough, you get music. The “English” version of the concertina is a fully chromatic instrument with a particular arrangement of buttons and reeds that makes playing in various different keys possible.

So that’s what I wanted: A MIDI controller in the shape of an English concertina. I wanted one because I can (sort of) play the concertina, and I’d like to operate a synthesizer. There are almost none in the world, so the only practical way to get one is to design and built it. So I did. Here’s what it looks like: 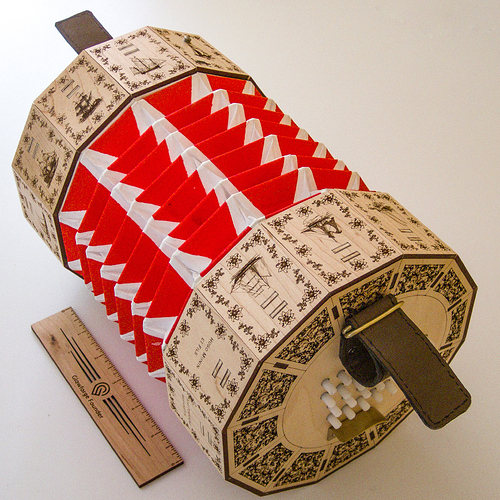 As you can imagine it’s got lots of parts inside. Here a picture of some of them: 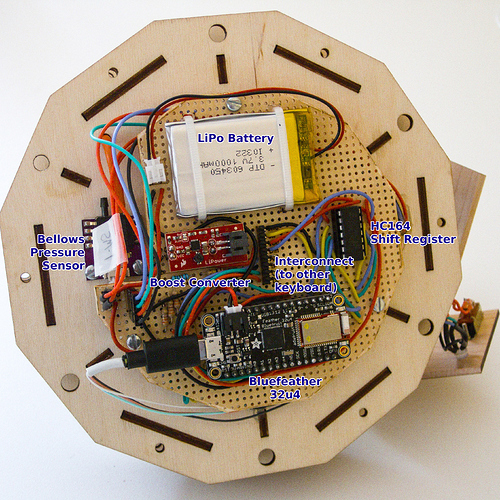 Here’s one of the keyboard faces: 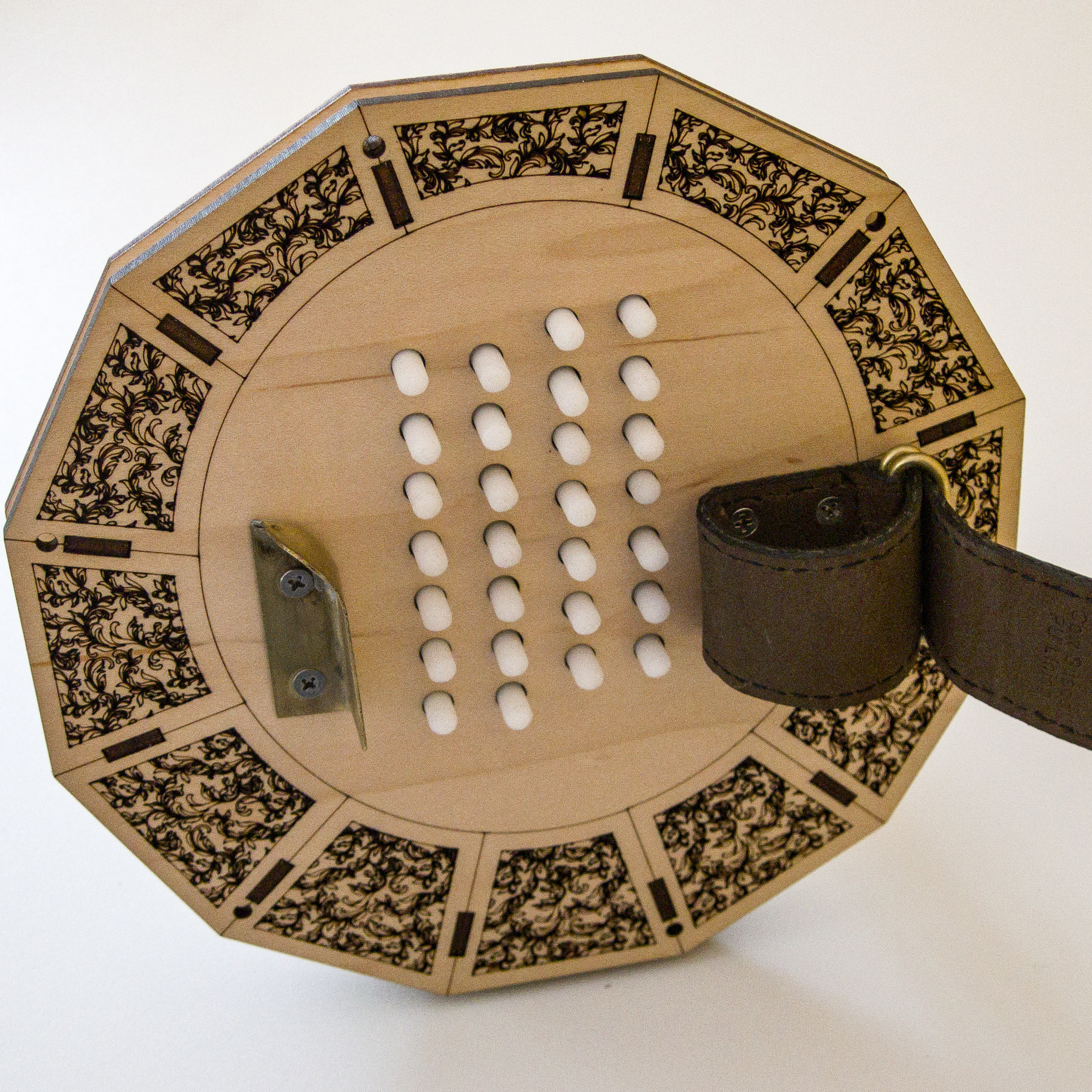 The keys are made of Delrin and so slip nicely through holes, reach into the keyboard assembly and operate the switches. Almost all of the parts, including the bellows, were made on the Glowforge.

I’m in the process of documenting the technical aspects of the build on hackaday.io. You can see it here if you’re so inclined.

This blows me away…(and I’m not being a smart ass and thinking about the bellows.) Every time I see an amazing thing like this that someone actually made with their Glowforge, it boggles the mind. Guitars and now an arguabley obscure instrument like a Concertina. I can’t grasp the build of the innards, but so appreciate what you’ve done here.

There are almost none in the world, so the only practical way to get one is to design and built it. So I did.

Kinda my three phases of reaction. A bit of confusion, however, is the air pressure moving reeds and the controller selecting them or is the controller playing based on air pressure and button pushed that you could make it sound like a trumpet, bells, or accordion, etc?

You are a genious.

Oh gosh, this is amazing! I would love to hear/see it in action. Do you have a synthesizer you can drive?

That may be the most ridiculous thing I’ve seen created with a Glowforge! And I mean that in the most positive way!

I’m actually sitting here smiling ear to ear at how awesome that thing is.

I see you have a pressure sensor in there. So you’re actually getting velocity sensitivity out of this?! Holy crap that’s awesome!

DAMN this is cool.

Does the Bluefeather give you Bluetooth MIDI?!

Wonderful unique Project! Thank you for sharing your progress!

I’m glad you liked it.

Yes, the pressure sensor is used to set how loudly the notes play. Technically, the notes are all played with maximum velocity and the pressure sensor sets what’s called the “expression” which sets the overall loudness of whatever notes are currently playing. If I press and hold some buttons to play a chord and then vary the bellows pressure, the loudness varies accordingly.

Technically, the notes are all played with maximum velocity and the pressure sensor sets what’s called the “expression”

That’s interesting. Is that a true representation of how concertinas play? I’ve never played one. But it’s funny that I was explaining the difference to somebody just the other day… How a piano key pressed as hard as possible, but at a low volume, is not the same as pressing a piano key lightly. And for many instruments that holds true. But some it’s purely a matter of volume as opposed to timbre.

I’ve GOTTA get into Adafruit stuff. So many cool things to make with!
Wonder if I could use this to make a guitar MIDI controller. I’ll have to research that!

Totally awed by this project. I remember the concertinas from my childhood. There were always a few street musicians with them in Amsterdam.

Is that a true representation of how concertinas play?

Yes, that’s pretty much how concertinas play. At least to the first approximation.

On a traditional concertina, pressing a button lifts a pad covering a hole in the reed pan. This allows air to move across the corresponding reed causing it to vibrate. The bellows pressure at the time the button is first pressed determines how rapidly the vibration starts and which of the reed’s harmonics are emphasized in the process. That allows the player to change a note’s “attack.” Once a note is sounding, changing the pressure mostly changes the volume at which the note plays, but there are also some (minor) changes in timbre due to changes to the way the reed vibrates at different pressures.

Unlike a piano, changes in the speed with which a button is pressed has little effect on the sound – especially compared to the effect of bellows pressure.

The synthesizer I’ve been testing with runs on my phone. (Building a “good” one is my next project.) Here’s a short vid on Vimeo showing how that works.

I am so in love with this project! Wow! I was looking at concertinas this summer. How fun to run across your post. It’s fantastic! I can’t wait to hear it played. I’ll hit Vimeo and then over to hackaday. Smart people rock!

Edit: Just watched video. My mind is blown. My favorite line is the last, “Anyway, that’s what it does.” I love the app and that the concertina can play in a variety of styles. This is an amazing project!

@rebecca I’m glad you liked it. It’s been a fun project. I’m really happy that it’s come along far enough that I can play it while I work on it!

@friki-tiki It’s been a great deal of fun to design and build. The precision with which the pieces are cut is just wonderful and a joy to behold. Without the

it simply would not have been possible. It’s a great – not perfect, but great – tool for things like this.

This is amazing. Delrin is the perfect choice for the buttons. Wowed and amazed !