I can;t really post this in the Support section yet as I’m using non-Proofgrade 6 mm (1/4") birch ply. I printed a static 40 mm wrench for a friend (2 layers held together with glue and a cross section). The two sides were facing opposite ends of the bed when cut and both are almost exactly 2 mm smaller than 40 mm.

I figured I’d accidentally screwed the dimensions so I checked OnShape (all good - 40.5 mm, figuring that 0.5 mm plus kerf would give me some slop), and then the Inkscape file I imported to GFUI (also looks fine at 40.5 mm). I re-imported one side of the wrench and recut that on a fresh sheet and it’s EXACTLY the same as the previous two sections… Anyone have ANY ideas on what I might be doing wrong here? Inkscape stroke width maybe (that seems massive though!)?

One thing I did notice is that I drew four 20 mm right angles and scored then on the corners of the piece to give me some placement assistance. Initially it looked like the GF was just cutting to the left of the placement. When I went back to the UI though and moved the right hand patterns to align with the actual scores, the left patterns don’t line up; they’re off to the left of the patterns… it’s like the forge stretched the pattern… {worried face}

I think you might be getting hosed by your stroke size in inkscape. Measurement boxes include the stroke by default.

To be sure, turn off stroke, resize, turn stroke back on.

Two things - make sure you have installed the latest (.92) version of Inkscape, and go to Edit > Preferences > and check Geometric Bounding Box. That keeps the line widths out of the measurements.

One other thing - thicker materials like 6mm stuff have more of an angled profile on the face of the cut than thinner stuff. It will be greatest at the top of the cut and less at the bottom. Depending on where you measure the cuts (top versus bottom) you might be picking up more kerf effect.

What @jules said on kerf effects on thicker materials.

2mm seems like a lot but carefully measuring the difference of top and bottom dimensions would tell you for sure.

Cheers both - I’ll have a look at Inkscape stroke issues first as honestly, eyeballing the three sections I can’t see any difference between them front to back.

Hey @Jules - I’m obviously being blind but I can’t find the ‘Geometric Grounding Box’ option in the settings for V 0.92. No mention of it in the manual. In the Edit > Preferences menu you refer to there’s mention of ‘conversion to guide using edges instead of bounding box’ on the Shapes sub menu but not that option that I can see…

…ignore. I am being blind {eyeroll + facepalm}

Hmm, next issue. Whilst Inkscape 0.48 would import a dxf with a polyline / spline and ignore said line. 0.92 is refusing to open the file at all. Any idea how to resolve that issue folks?

Is this a good thing?

No clue on the DXF issue though - never used OnShape. Might try re-exporting and make sure that the units of measurement are set up the same in both OnShape and Inscape. (If you use mm, stick with mm on both document setups.)

Sure, badgers are a good thing. Especially when it’s the badger you’re looking for!

Yeh, those are right. Doing a bit of digging it looks like OnShape and Inkscape use different types of Polylines in the code and they don’t play together well at all. I can replace the spline with a line in OnShape and replace it in inkscape - just until I get used to making dimensioned drawings in Inkscape.

Do Inkscape and Fusion play better in this regard, do you know?

Also, thanks muchly for the help

There were actually some early issues with sizing between F360 and Inkscape too, if I recall correctly. I’d stick it out with the program you are more familiar with at first…just to make the learning curve a little more gradual. You can always try Fusion later. (I like it better than Rhino, which I was using before, but I started learning it about a year before the machines were built, so it wasn’t overwhelming. Great little program and worth learning eventually.)

Do Inkscape and Fusion play better in this regard, do you know?

I have not had a single hiccup with Inkscape reading a DXF written by Fusion.

I use the kiri moto extension for OnShape and that exports a great svg that needs no tweaking. There is a laser setting that allows you to slice the model into whatever thickness and you can get the shape outline. It also allows you to compensate for kerf if you want so design exact dimensions and it will produce an svg with kerf allowance. 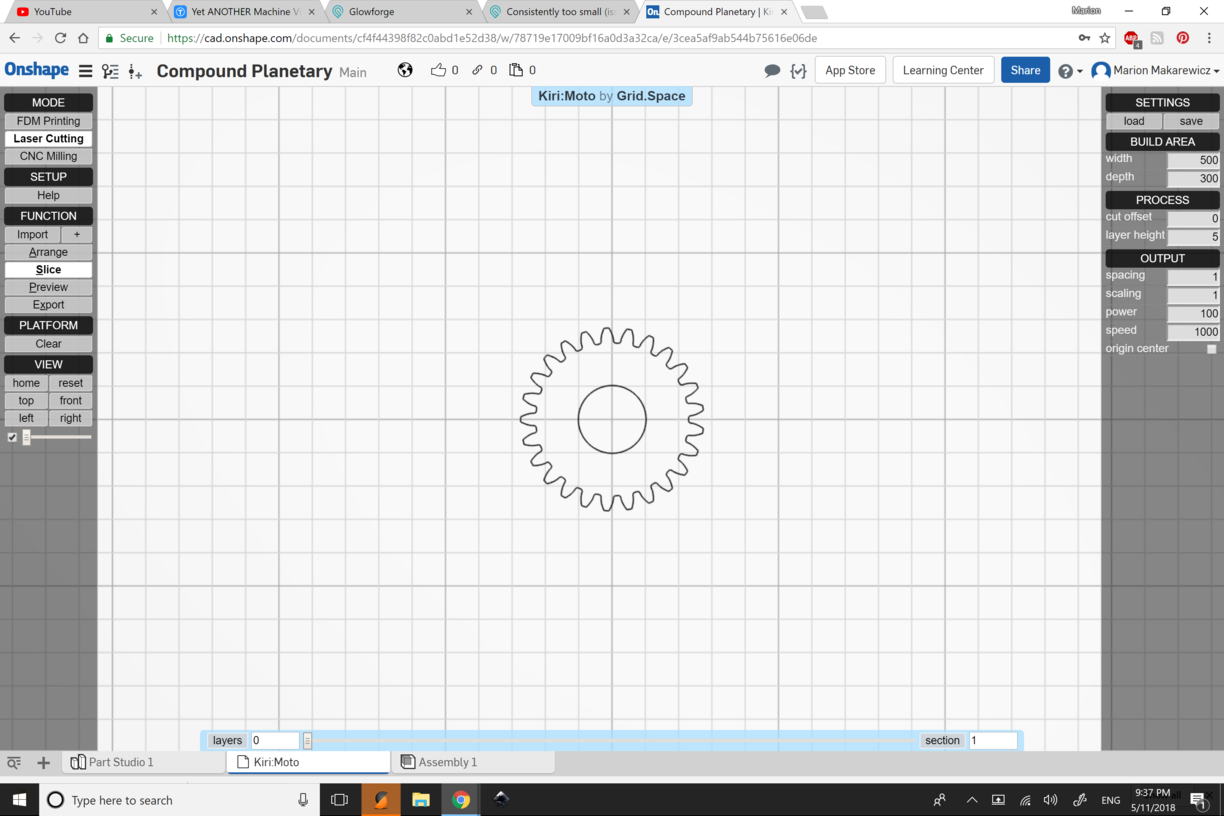 Awesome! I will look into this. Never used extensions in onshape. This is new terrain. Thanks

version of Inkscape, and go to Edit > Preferences > and check Geometric Bounding Box

Make sure that “Tools” is highlighted to see that choice.

Thanks for the pointer (on the line widths).