Thanks to @rodrigobrionesm for the link.

I used the manual from https://www.rbguns.com/guns/m-9/ and converted it all to SVG and modified the sizes to use medium draftboard. 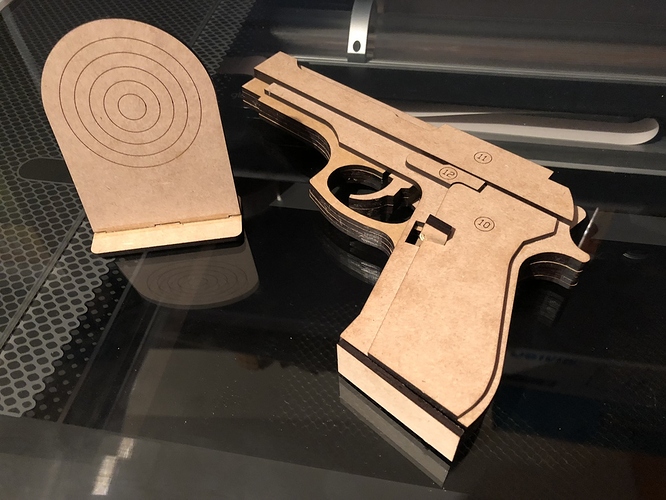 So? Do you think it would be okay to post?

33 Likes
Fun cardboard rubber band gun
No fly swatter? No problem
[MakeCNC] Allosaurus
Target for kids(?) to use with Nerfgun
dwardio January 17, 2018, 1:43am #2

I don’t see why not. The original GF video featured a drone with a rubber-band gatling gun…

I don’t see any problem with posting a rubber band gun. Looks like fun.

I was more concerned with posting someone else’s work. He did post the the plans and a video. All I did was make it glowforge friendly.

I flipped some of the pieces so that the markings do not show on the finished piece. I used medium draftboard and wood glue to put it together. I had some small screws lying around and found these dowels on amazon.

Looks like a cool project. Given that the shape is very realistic, maybe stress that the “barrel” tip should get some bright orange paint. It’s rare, but you do hear about people mistaking toys for the real thing with tragic results. Can’t be too safe.
Thanks for posting the cut sheets!

Thanks for taking on the conversion! My ten-year old grandson and I found your project yesterday and are in the process of bringing it to fruition!

My grandson and I finished putting together the M9 – and a big tip of the hat to @bwente for making this possible. The only change we needed to make was shrinking horizontally the length of parts #30 and 31 – the device that holds the magazine in place and when pushed releases the magazine. This is because the original plans used 4mm material and the conversion used medium draftboard, which is thinner, and the latch was too long to fit into its channel. So, in the GUI, using the ruler, we shrunk horizontally the two parts so they were ~75% of their predecessors, cut, glued and installed – and then all was well. We found an online image of snakeskin stippling and tweaked it to fit on the M9’s grips. He repeatedly loaded eight rubber bands at a time and found the pistol to be extremely accurate. Is my grandson happy? You be the judge… 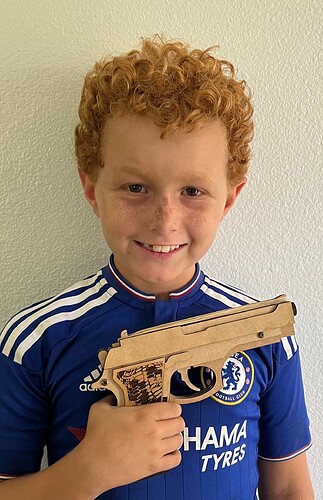 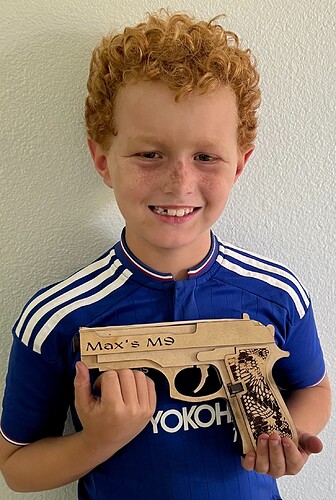 Thanks for posting a picture. I glad you got it working.

Weird about the sizing. Was draftboard alway the same thickness? I do remember I had some humidity issues early on.

I’m not sure about the draftboard sizing. Frankly, the only Proofgrade draftboard I’ve ever used were the pieces that came with the Glowforge when I bought it. Since then I’ve been buying ~1/8" MDF from a variety of local suppliers – all much cheaper than Proofgrade. Regarding humidity – it’s been in the 80% realm the past two weeks and that may have had an effect. At any rate, thanks again for converting the plans!