For my Tormach PCNC 440 CNC Milling machine, the built in flood coolant system is somewhat inadequate (I mean it’s there but unlike the larger models it’s not really expected that you’ll aggressively use flood coolant). The built in coolant system first off has a tiny reservoir and a underpowered 1/4HP pump into a single nozzle (which with the extra tubing kit you can split into 2). The pressure in this system is pretty wimpy. Since part of the job of the flood coolant is to wash away chips so you don’t recut them, you need pressure and flow. So I built my own entire coolant loop. The only part I kept from the original coolant add on was the control relay that lets the controller activate/stop the pump with G-Code. The parts I got were a large rubbermaid container (hold about 30 gallons) a larger 1/2 HP submerged pump and up on the Z-column a 3-port coolant manifold from Santa-Cruz Electronics (got my order in literally the last day before they went on Covid hiatus). So that lets me have 3 nozzles. Along with the pump this gives me enormous flow of coolant (actually too much for the enclosure, which I have been forced to then modify to have better sealing/coolant diversion). One major flaw is that to prevent chips from ending up in the coolant, they have a small grating in the bottom of the chip tray through which the coolant drains. This does block a lot of chips (in fact sufficiently that during big jobs will clog completely with chips preventing any drainage due to the 1/2" high beaver dam of chips that build up around it) but a huge amount get through this grating, so towards that end I put a 6" flour sifter fine mesh into the return of the coolant into the tank to collect the chips that get through the grating (a huge amount). So that ends up having 2 problems first coolant splashes out as it hits the mound of chips collecting there, and second provides a nice port for evaporation of coolant. Also when the coolant splashes is scatters chips on top of the coolant tank. So I made an acrylic cover that has a inner ring to sort of seal against the top to prevent more splash out. The M3 bolts were more to hold it all in place while the Weldon #3 took effect. I was originally going to make it a tight fit into the strainer but found that when I did that, since you end up opening this repeatedly to either unclog the tubing or get chips out into the recycle bucket, it was annoying so just made it loosely fit on top in version 2. It has greatly cut down on the splashing and evaporation. And yes I need to clean the top of the tank from the prior splashes but the aluminum chips are all coolant laced so pretty sticky on there and hard to gather up (the downside of flood coolant).

All in all happy with the coolant system. I ended up adding a coolant filter (50 micron) on the back of the mill as a few times the “smalls” which are the tiny chips that get through the screen there get pumped up to the nozzles (which are a pain to unclog) 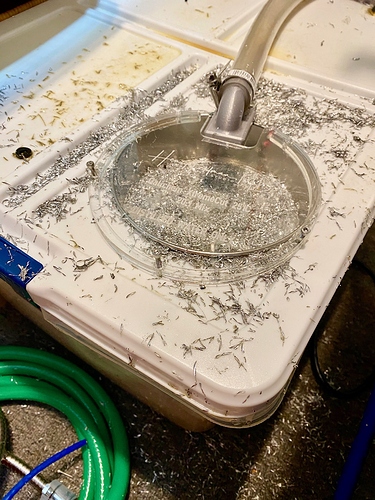 The nozzle is just 3D printed in PLA and works just fine. I deliberately use a flat edge on the nozzle so that the fluid doesn’t come in a jet (because when I did that it splashed waaaaay more. So this way surface tension tends to spread it out)