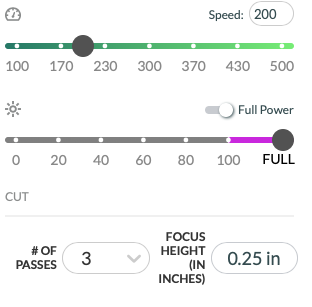 Since baltic birch is not a proof-grade material this should not be in the Problems and Support section. GF has no control over the quality of materials they do not supply. If you were having issues cutting proof-grade thick plywood then it would be a different matter. Plus they don’t sell a 80-120 Watt laser for speed comparison.

This is not something that requires a Support ticket to be opened. Therefore, I shall move this.

Not claiming a material issue. Wanted to justify a power question. Thanks for the info on cut settings. I did a cut test and could get a very clean cut through 1/4" with 3 passes at 250/full power. This left a very fine exit cut without any flashback from the crumb tray.

I’m only trying to understand a power rating.

I’m only trying to understand a power rating

Unfortunately it’s not really linear so it’s hard to draw comparisons. Generally speaking you should be able to go twice as fast with an 80W or 3 times with a 120W. However, the speeds on the GF aren’t in inches or mm or anything we know so it’s a complete guess when you go up against a machine that does use stated common measurements. There was a spreadsheet they made available on the forum back when they switched speed scales that might still apply that you could use to translate.

For your current situation though, you should be able to cut in one pass. If it’s taking you 3, it suggests either the optics are dirty (reducing the power delivered) or a focus issue (in qtr inch I usually override the focus and put it in the middle of the material vs the top as you get with Set Focus.

If it’s not real Baltic Birch but just Birch then it may also be a problem with the material. There are voids and glues and skeevy stuff in regular plywood. Baltic Birch won’t have any of those. But you have to get it from somewhere like Woodcraft or Rugby as you won’t find it at Lowes or Home Depot (even if they claim it’s Baltic Birch, they’re lying).

I’m certain I have a material issue, it is not why I posted. I’m only gaining knowledge of the power rating and influence on passes. My cut test let me know what power to use with the best result on exit quality. I’ve switched the process up on the above recommendation and it certainly works. It does have a more aggressive exit result.

I bought Baltic Birch from a Lumber source in Upland Ca. and it’s proven to have a reject rate from 4-100%. I’m completely aware I have a material issue. I truly posted to better understand a power rating with multiple passes.

Thanks for your reply James!

In addition to Jamesdhatch’s excellent answer, I’ll just share what works for me. I get my 1/4 inch baltic birch from woodpeckers. Their bulk rate is awesome and I rarely have problems with fill or knots. Any I do encounter are easy to deal with. Material is a huge factor. I once got luan from a lumber yard that would cut fine until halfway though the board and then stop, creating an easy to see line between the cuttable and uncuttable. My 1/4 inch settings are I’m the attached image. I got them from the forum and it cuts every time as long as I pay attention to the board thickness Woodpecker stock is reliably .23 for me.

Yep, I have the GF plus!

If you are making 3 passes you are going to end up with some serious charring on your cut edges. A slower single pass will be much better and will probably be faster in the long run.

2 passes at the same focal point is not quite the same as twice the power. Because the laser is an hourglass shape past it’s focus (50.4mm or 2") so the first pass is focused on the surface. The second pass is also focused on the surface but there’s a tiny bit of material that has been burned away by the first cut. So the beam has spread before it hits material to burn again. It’s a little less powerful.

Same is true for the speed. It’s non-linear so you can’t just slow it down by “half” and get twice the delivered power. It’s a little frustrating because it’s not the way most other lasers work.

Understand what you mean about the hour glass. I did a depth of focus exercise and the focused beam might only be 0.183" of precision concentration. Great volley by the way. Good info to learn and expand upon for me.

Note to Self; Develop a collimated lens for Glowforge users aftermarket sales. Focus point goal of 0.005-0.008".

Note to Self; Develop a collimated lens for Glowforge users aftermarket sales. Focus point goal of 0.005-0.008".

That would be very futile. Some Lasers that are sold for ten times as much have a greater distance from the lens to the work, which makes the slope of the hourglass much less and maximum heat over a longer range. In every case, maximum focus is a single point, usually at the top of the material.
Below that the focus gets less, However, no matter the laser many woods are harder when “cooked” than before, and combined with losing energy to the sides of the previous cut the result is less than the same energy applied in a single pass.

The other things that makes it hard to answer your question is that GF has it’s own speed scale (vs the more standard cm or inches per second) and also limits/modulates power to extend the life of the tube. So it’s very difficult to compare GF settings to any other laser brand with certainty.