You can (and I did) try and do a 1\4" engrave which would heat the wood a lot and certainly as much as you would get by heating the whole piece. I figured then I would be cutting only a quarter inch deep. The result was a lot of charcoal and it still needed a saw for much of it.

I am reminded of the story where some folks went to look at a lunar eclipse that was nearly full even as the moon was rising. The stood on a road along a huge field so the could get the earliest view and as the moon came up they were amazed.

Then one of them went running across the field saying he wanted a closer look.

I think the difference between the added energy by heating and the energies at the point of contact of the laser might be of a similar range.

I would rather soak the wood in water to reduce the amount of energy transfered from where you want it to where you don’t.

I just skimmed the article that I posted, but they spoke about the moisture content and how it effects cuts. That they saw narrower kerfs with high(er) moisture content, though shallower cutting depth.

You’re probably a bit optimistic there, I doubt our dots are consistently that small, and we probably lose some power en route, but you’ve got a point.

There is one way to be sure…

Noooooooo… don’t even think of this as a serious option for any operation or shop.

Totally different reasons for preheating a PCB before soldering than this idea.

Thanks for doing some math–I knew someone would as to why heating material prior to laser cutting does nothing to help the laser cutting!

I just skimmed the article that I posted, but they spoke about the moisture content and how it effects cuts. That they saw narrower kerfs with high(er) moisture content, though shallower cutting depth.

When I was zapping wet wood, I also saw essentially no char. (Which was kindof a problem on the engraves.) There are the issues with keeping things flat, but it’s interesting to consider.

…or buy a table saw.

Or a band saw for non-straight cuts… though not nearly as much fun as a laser!

Hmmm, if only they had something that could cut through wood! Maybe made of metal or something sharp and with little teeth even.

Not that having an industrial furnaces to preheat wood to put into a laser isn’t an amazing idea though!

Something I learned making jewelry that many folk were using power tools simply because they were power tools like a grinding wheel on a flexible shaft when a hand file worked just as fast or faster and with the same effort and a lot more control.

Another jeweler here, you just can’t beat a sharp file and a well worn bench pin.

As an avid consumer of woodworking knowledge I know that wood needs to acclimate its moisture content to the normal levels surrounding it. That is why drawers stick sometimes in summer when the wood swells with moisture and are loose in winter when conditions are dryer in my area (Chicago metro area). This is also one of the main reasons wood warps. If too much moisture is released or absorbed it leads to warping, bowing, etc.

Therefore applying heat to wood would decrease its moisture content and introduce warping which is not good for lasering. But even if you managed to not get warping wood is a natural insulator and hard to heat thoroughly in a fast manner that would not lead to the creation of charcoal, and this what could lead to changing some of the chemical composition of your wood. If using resinous wood like pine the resins would leak out of the board (this I know for sure, don’t try to dry pine in the oven, or grill not a good idea even if you like the smell). Also look up some videos on steam bending wood. They put larger pieces into a steam chamber for hours to get a thorough heat of the piece but only have seconds to bend it once removed from the chamber. This would lead me to believe that even if you got a piece warm the heat would dissipate rather quickly to make a real difference given the cut, or engrave time needed for thicker projects.

However I would like to see how some heat modified woods would cut or if they can even be lasered. Because they are heated so high that chemical reactions occur and their properties change which change a lot of the silica content into a glass substance that makes the wood decay and insect resistant as well as expensive.

But like what @evansd2 said at the beginning what do I know. Try at your own risk.

EDIT I meant to write --DO NOT Try at your own risk
thanks for pointing that out @evansd2. This is why I should not try to reply from tablet late at night.

Try at your own risk. 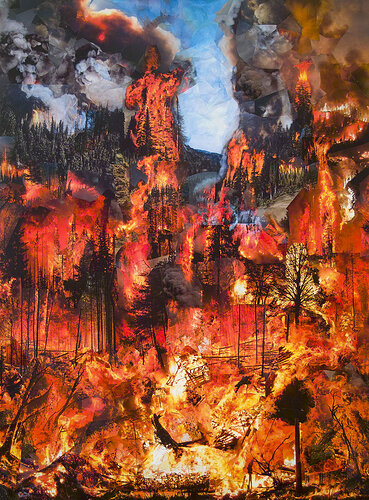 Yeah, you might have the power set a touch too high there.