Cutting after object is already engraved

Hey guys, I purchased a Svg file online from someone thinking that it would cut the object out after it was engraved but it didn’t (rookie mistake on my part). My project is fully engraved now and I need it to be cut out from the wood. What is the best process to do this ? I am extremely new to this stuff and have never done my own cut. I am somewhat familiar with illustrator and Inkscape. Any advice or directions would be greatly appreciated. 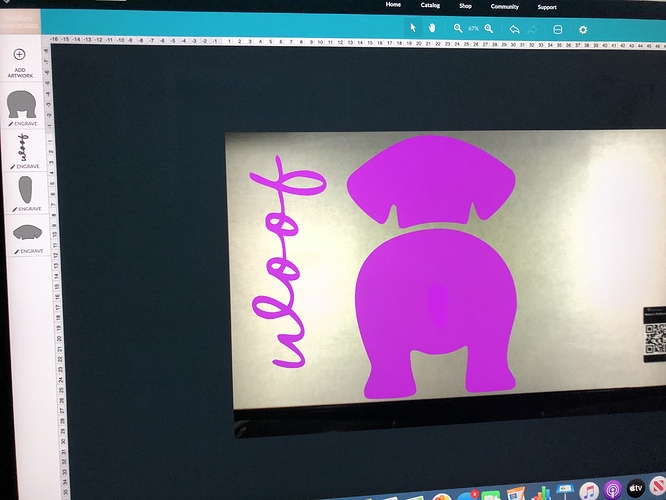 If you haven’t moved anything in your bed - yay!

Set it to cut instead of engrave (click on the steps on the left)
Hit print
Really, just that easy

If you have moved anything, let us know, because it’s still doable but much more complicated

Havent moved anything at all! So just on the left hand side I change them from “engrave” to “cut” and that’s it???

Also, when you’re done with this one it is totally worth it to go through the First Three Prints tutorial. It’ll give you the basics on all this stuff!

It will cut out each piece individually - not a box around them together. Not sure why you wanted to engrave them and cut them this way, when they are just the shapes.

If you want them cut out like a sign, you need to not move anything and “add artwork” a square vector.

Since the engrave is uniform, it only makes sense if you’re not going to cut the parts out in outline, but will leave them on a “panel”. The engrave defines the shapes. If you’re going to cut them out on the outline, don’t waste the time to engrave them. All that does is burn the wood surface. Cut it out, the job will take hardly any time at all, then paint it if you don’t like natural wood color.

I think your mistake was just that you chose “Engrave” on the SVG instead of “Cut”. Had you chosen “Cut” you’d be looking at exactly what you wanted to begin with.

What shape are you expecting to cut? Just the outline of these, so you can attach them onto some other material?