Pulled this chunk of material out of the trash can LOL. I drew a silver dividing line through it. The top portion is raw 11oz 2x2 twill weave carbon. The lower portion below the silver line is the same material but it’s been saturated with water clear silicone rubber - another experiment for another day haha.

Anyway, interesting enough, both these holes were cut at the same settings and the raw carbon cut much more cleanly. The silicone made a lot of ash. Neither produced any noticeable smell when the lid was opened.

I cant think of any practical use for cutting raw carbon cloth on a laser because the nature of the material it just unravels and falls apart at cut edges anyway, and it’s faster to cut by hand…well, I use electric shears to save my forearms. 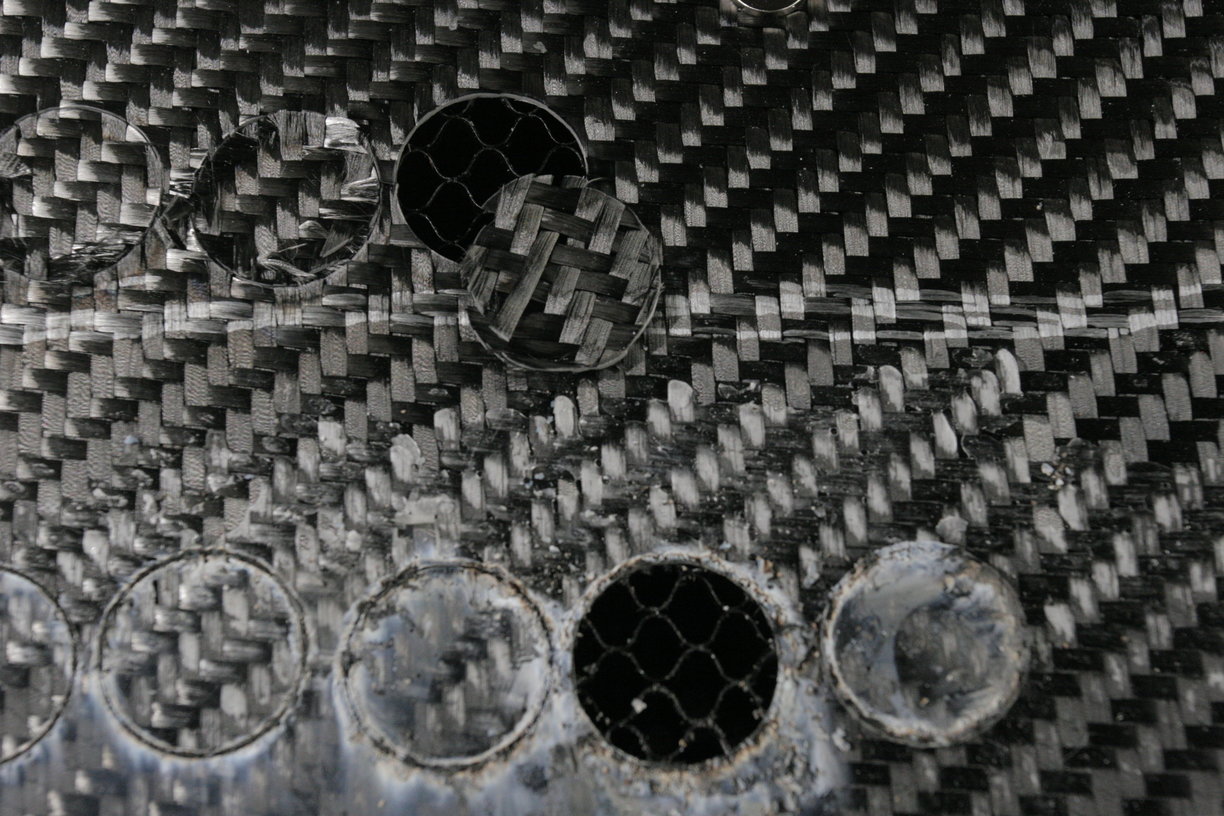 Which parts are you building with carbon fiber?

Carbon fiber would be amazing additions to jewelry design. Cut it in a complex design, inlay it into wood or acrilic and cover with epoxy.

What trash can did you take that out of??? i wouldn’t mind some dumpster diving!

Which parts are you building with carbon fiber?

The majority of the car project is all carbon fiber.

Cut it in a complex design, inlay it into wood or acrilic and cover with epoxy.

What trash can did you take that out of??? i wouldn’t mind some dumpster diving!

The only way to cut this into a complex shape is after it’s been wetted with epoxy and cured, because the fiber bundles are loosely woven and they distort too much after cutting. And I’m not sure how the epoxy reacts to laser cutting.

I tend to have a lot of carbon fiber laying around here, whether rolls of raw fabric, scraps of fabric or scraps of cured material.

isn’t this toxic to breath…

I looked it up: “ex-epoxy” = chlorine gas.
Thats not stuff to play with.

There was not any epoxy in this material.

Idunno whether it would work universally, but for some things packing or masking tap, cutting, then add the epoxy or other fixative?

What about craft epoxy? There are three types, iirc.

So the laser won’t seal the edges huh?

I don’t think carbon melts, it just sublimes, so I don’t think you can seal the edges like you can with plastic strands.

Nope, no edge sealing. Carbon does not melt, it won’t even readily burn under flame from a torch.

Could you put a bit of wood or acrylic under it while you cut, then move the whole “tray” out of the forge and epoxy it before you actually move the carbon fiber? Just making thoughts…

The issue is that carbon fiber is really delicate to handle. Not that it will break or anything, but the fibers are easily disturbed and frayed, and will have to be handled to some extent in order to get resin to completely wet it out and build up multiple layers.

Good to know. I’ve seen LOTS of jewelry with carbon fiber inlays, but i’ve not worked with it myself. BUT I kinda now want to play with some…

One simple way to keep carbon from unraveling is to glue it to a substrate with spray glue. I do this pretty often for vacuum bagging complex parts, especially when I’m using infusion. The 3M spray adhesives work well and you don’t need to use much. Doesn’t interfere with saturating the cloth since the spray stays on the surface. The effect on lamination to the substrate varies with the material. For EPS or PVC foams, there’s no problem under bagging pressure since the epoxy pushes into the porous surface. I’ve had problems with smooth wood that was solved with scuffing the wood to begin with and using the spray very lightly on the wood, heavier on the cloth.

So, of course, I had to try it. Here’s the founder ruler rendered in carbon over maple. I had to do two passes to get the wood cut as well as the epoxy. Not great, not bad for a first try. I couldn’t find my 3m glue so I used a bit of acrylic clear paint as glue. I don’t recommend that–stinky. I’ll continue to experiment with this. The value to me of the glowforge as a tool is 1X, as something to experiment with it’s 3X, as something that will accurately cut carbon is 10X. I put a little epoxy on the ruler after cutting to see how it laminates with just wetting. 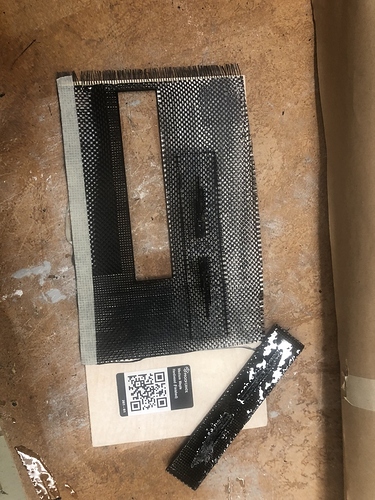